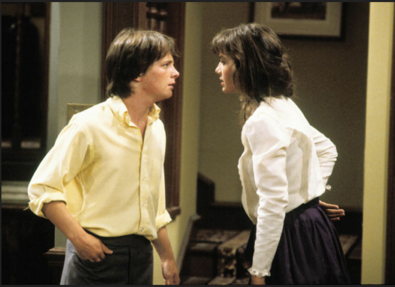 I watched a reunion interview from a few years ago. It was the cast of the old sitcom “Family Ties”. All very likable people and I remember quoting so many lines from this show when I was a kid.

Michael J. Fox mentioned the great presence that Justine Bateman brought to the back-and-forth between their characters. It was some of the best stuff on the show, with sweet-but-dim Mallory and uptight, snarky Alex going at each other.

Fox said that Bateman would float her set-up lines like the lightest balloon, delivering them so beautifully and allowing Alex' sarcastic comeback to pop it.

It made me realize how many moments on that show…and in many comedies before and after, have had these great setups, with a dopey or clueless or eccentric character saying something with absolute confidence…something that shows a lack of self awareness or intelligence. In a sitcom with a studio audience, these setup lines will often get a laugh. The other character will wait, processing what they've just heard (and in a sitcom, also waiting for the audience to stop laughing). This character will then deliver their sarcastic or mocking comeback, getting (hopefully) an even bigger laugh.

Like I said, these funny setup line - pause - witty comeback is a staple of sitcoms. Even with no studio audience, the comedic timing of the pause is important.

Really, there are plenty of important parts with this kind of comedy. The lines have to be
FUNNY, of course. And make at least some sense in the context of the characters. But the way they're delivered, with timing, and chemistry between the actors is what makes this stuff crackle.

I've watched a couple of sitcoms with the laugh track taken out and it was very informative! Friends was actually funny (in my opinion). The Big Bang Theory - maybe not so much (very talented cast though). It was done masterfully by Michael J. Fox and Justine Bateman on Family Ties.

I love Family Ties! I think Mallory brought a fun dynamic with Alex since she was not related to the rest of the folks in the house.

I've always wanted to watch some sitcoms without the laugh track - the main reason why I used to switch of most of the time. I'm sure I missed a lot of hidden gems that way. The pause for the setup line would still be important - I know that from stage productions. It's about comic timing in perfect harmony with the drop height. By drop height I mean the intellectual level the prompting character thinks he/she is on, compared to the one he/she is revealed to actually be.

@Andreas - thanks - you have great articles both last week and this! haha...yeah i didn't talk to ozoneocean this week so i just posted without checking.

Hey, Banes! Looks like we both got our articles posted on the same day:D It's great to see your pop culture wisdom back in the blog:)