You Call That a Period Piece? 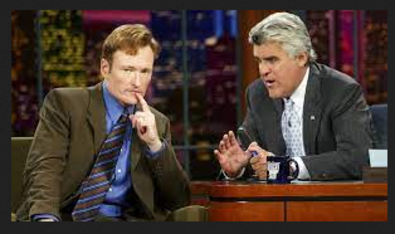 It was only a little over ten years ago that everyone seemed to be talking about the dustup in the late night talkshow world with the Conan O'Brien/Jay Leno transfer at NBC. It hinged on the (forced) retirement of Jay Leno, and Conan taking over the coveted Tonight Show slot at 11:35 weeknights. About twenty years earlier a similar dramatic story unfolded with the retirement of Johnny Carson (the reason the Tonight Show was such a valued seat) and the rivalry between Leno and David Letterman.

Conan mentioned the events recently on his podcast and it struck me that there was all this high-stakes wrangling over a time slot and show, and now, ten years later, time slots on TV are all but meaningless. Even at the time, plenty of people were thinking “what does it matter?” Of course, it mattered to Conan and to Leno.

It's interesting how the stakes of even a recent time in history can become so alien to modern experience so quickly!

I'd say the Pam and Tommy series shows how much things can change in just a few years - and also that there's plenty of interesting stories to be told in the world of “recent history” period stories. Our culture and technology in particular, changes at blinding speed in modern times.

I've got a few articles in mind for this topic.

Ozoneocean--Your "date by phone" concept reminds me of a running gag in The X-Files where they'd always have a bigger and clunkier cell phone in flashbacks.

The reminds me. Jay talked about his super expensive $4 million dollar McLaren and how it was state of the art when it was made in the late 90s. It had a on-board computer to diagnose issues and even a modem in the door that could be hooked up to a phone line to send the data to the factor in Switzerland or wherever... But now there are no systems that understand that computer data and the modem is so ancient it doesn't work with anything anyway. The car also famously had a "gold-lined engine bay", but now the gold is all flaking off and it doesn't looks so amazing or sexy anymore. So even though the car was super high tech at the time and still looks super modern AND it's worth MORE now than ever, all it's innovations are ollllld and out of date XD

All the difference ten years makes. Now one has many podcasts, the other has many classic cars.