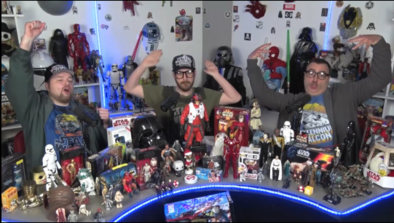 The manchild is a very comic trope in fiction over the years. It's the kind of person who is an adult physically, but have not accepted adult responsibilities in some parts of life…or maybe any part of life. They are irresponsible in relationships or work or life in general. It's great fodder for conflict, especially comedic conflict, to have this person bumping into a more “standard” environment or group of people.

Bill Murray in his early movies was one of these guys, as well as the slacker goofball heroes who followed his lead.

Movies like High Fidelity and Beautiful Girls are some of my favorites that deal with characters dealing with leaving their youth behind and moving forward. Comedies with Adam Sandler and Chris Farley, and the Kevin Smith films of the 90's are good examples of the more permanently-immature types, bless ‘em. And there are endless other examples of course.

Even in more dramatic stories, the Manchild is usually funny. One of my favorites is Paul Newman’s ‘Sully’ character in the movie “Nobody's Fool”. He's 60, a blue collar worker, and a rascal who never grew up. Still, he's a tough guy, and an honest person. He reminds me of my Dad actually.

Sometimes these characters are wealthy, via their parents, and that allows them to not grow up. Or they're insulated by their parents even into adulthood. Sometimes they're just the way they are and don't quite fit into regular society. Just never made that transition. Sully from Nobody's Fool is probably my favorite example of that, as I mentioned.

The manchild accepting adult responsibilities - or SOME sort of responsibilities, even if they remain their eccentric selves in other ways, is a very concrete character journey in a movie or book. An alternate plotline is to have the manchild bend the world or environment to their own way of doing things.

It can be done well, or poorly. I wonder if the trope is overdone. The thought has crossed my mind. And our real world, some might say, is overrun with adult children. In a way, I think it might be time for our popular fictional heroes to change it up. And grow up. Maybe so!

In any case, it's a character type that can be done brilliantly, or ham-fistedly. They can make us laugh, or break our hearts, or make us roll our eyes in annoyance.

Any manchild characters you love? Any you despise?

Actually! Sydney from the webcomic Grrl Power I think would fit in on the profile of womanchild:P https://www.grrlpowercomic.com/archives/comic/grrl-power-16-marketing-101/

Yep, PeeWee Herman is a childman, haha! The cool mother is a womanchild, yeah, same as cool dads. But there's an edge to those tht makes them not qiiite as muc of a child. Amelius yup, Sweet D in Always Sunny fits, plus her character in The Mick is the same. Maybe Washu in No Need For Tenchi? Certainly Ryoko from there!

Perhaps the champion of them all--Pee Wee Herman.

Ozoneocean--Regarding the womanchild...The "cool mom" trope fits that bill pretty well; you know, the moms who live vicariously through their kids (e.g., the popular girl's mom in Mean Girls). As stated in the article, Bill Murray was great with this character type in S.T.R.I.P.E.S.. 40 Year Old Virgin (and all of his buddies) fits the bill. And then there's Harry and Lloyd in Dumb and Dumber and Stanley Ipkiss in The Mask.

Hey it's the Nerd Crew! I love Red Letter Media XD Oz, I agree! Most of the womanchild characters end up in animated media more than live action, though I think Dee Reynolds from It's Always Sunny in Philadelphia counts as a good live-action example. I personally can't stand Melissa McCarthy's brand of it though... but I love Sandra Bullock in those roles.

I think Jeff Lebowski aka "the Dude" from the movie The Big Lebowski (1998) is the one manchild character who actually manages to make his manchildness look ideal. He's just as iconic of a manchild as Homer Simpson or Mr. Bean, but unlike them he never feels like he's a nuisance or a burden to anyone on a normal day, or have any self-conflictions of any kind. All the guy wants to do in life is to smoke weed, drink white russian and go bowling. He's the laziest and most indiffirent of bums you can ever come across, but he's also considerate, knows how to argue, is greatful for the few, good things he has and he's also kind of stylish in a way. It's only when external forces invade his bubble of almost zen-like laziness that problems arises for him and he becomes tit-for-tat and desperate. "The Dude abides" - quoting the man himself - and you can't help but love him for it.

One thing entertainment media rarely covers is the grown up womanchild :) Women are exactly as prone to that sort of behavior as men in every variation and permutation of the phenomena, no difference on gender lines either in the amount or the extreme. I think it's not popular in the media because most writers have traditionally been male and write women from a more external point of view, so we get responsible types, desirable types, manic-pixe-dreammgirl etc. There are more Womanchilds now than there used to be in the past and they're just as funny and likable as the male versions... Melissa McCarthy plays one in many roles as does Rebel Wilson and Sandra Bullock.

Btw. I won't start with any psychological crap about all of us secretly wishing we had more courage to give in to childish urges every now and then, making a manchild character a kind of surrogate. It's true, though.

Mr Bean as one of my childhood favourites comes to mind immediately. I remember Rowan Atkinson stating in an interview that he didn't want to play this character any more because he felt that once he looked too old the whole thing would become sad rather than funny. And that's an important point here, actually: where is the line between comedy gold and second-hand embarrassment? Mr Bean always walked the edge even in his prime. Dick van Dyke, on the other hand, somehow seems to have a knack of portraying elderly manchildren with some dignity - possibly there's some typecasting involved. I'd also say that this is one of the areas where animated or comic characters can get away with much more - Homer Simpson and Obelix are my favourite examples here. I'd never want them to grow up in any way, because that would be really tragic.

It can also be a very mundane character flaw. The guy who hates responsibility and likes to play around. Mark Hamill played an interesting take on it on an episode of Amazing stories. A young man in the 1930s is told to never let go of his childish things and lives a miserable life as a poor wretch. Finally in the 1980s his childish things are worth a fortune and he lives his golden years a multimillionaire and as a sought after expert on Golden Age comics.

I don't like all the Adam Sandler manchildren. I wish he would play different roles. Will Ferrell and John C Rylee are great manchildren in all the films they reprise those character types. Zack Gallafanakus is pretty decent too in the Hangover films.