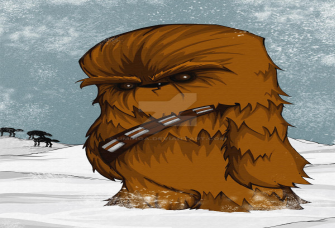 In this newspost I thought I’d start breaking away from myth a little bit. So far I’ve brought up species and entities from myth and legend, but this is not a series of articles that is just about mythical fiction, but also popular fiction. So! Wookies! Absolutely iconic for those of us who grew up watching Star Wars. They are a tall, alien species of furry humanoids who come from the planet Kashyyk. And tall, hairy fellows they are! They can grow up to a height of three meters (Over 9 feet for those using those measures).

The average male will weigh around 150 kilograms (330 pounds) and the average female will weigh around 100 kilograms (220 pounds), and they all have an average lifespan of 400 years. Another difference between female and male wookie is that the latter grows a beard later in their lifes. And speaking of hair, as you probably know they are covered head to toe in a thick, shaggy coat of hair that is water-shedding – very convenient living on a rainy forest planet – and comes in shades of brown, black, grey and white. They eye color can be either blue or brown.

Being big boys and girls they do eat a lot, an average adult wookie recquiring 3500-6000 calories a day of food, their diet consisting of wild plants, berries, meats and spices (and they prefer their spice hot). Wookies have extendable claws that they use for climbing and are prohibited by the Wookie code of honor to use them in any other way. Despite their fearsome appearance and volatile temperament, Wookies are intelligent, sophisticated, loyal and trusting.

As for Wookie culture. Wookies are expert craftsmen who has blended off-world technology with basic materials such as wood, precious stone and metals. The trademark Wookie weapon, the bowcaster, is always handcrafted. Chewbacca, everyone’s favourite Wookie, on the other hand broke Wookie tradition by adding an automatic cocking system to his bowcaster. Now you’re probably also familiar with how Wookies talk. Though it almost always just sounds like a series of incoherent grunts, growls, roars and purrs. The common Wookie language is called Shyriiwook and is one of the three only languages Wookies are able to speak due to their strange vocal chords.

The two others are Thykarann and Xaczik. But they can however understand other languages such as the Galactic Basic Standard, the language most characters speak in the movies. Shyriiwook has many words for bloodshed, and over 150 words for wood, but non for artist since the Wookies consider carving a survival skill and not a talent. Loyalty and courage are central tenents in Wookie society and it is typical for a Wookie to value honor and friendship above all else. The highest gesture of a Wookie complimenting someone is by grooming them.

And now. I know the question you’re all asking. Are there any force-sensetive Wookies in the galaxy? And the answer is: YES! It’s rare, but it does happen. Some have even become Jedi, a great pride to their people. So imagine that. Over 9 feet tall, weighs 220 to 330 pounds, hairy from top to toe, growls and roars all the time, masters the force and is wielding a light saber. That is wild! And I’ll think I’ll just stop from there.

So what do you think of Wookies? Would you make a fan comic about a Wookie jedi? Would you let the Wookie win in a game of chess? What fantastical creature or entity of fiction or myth, any fiction or myth, would you like to suggest that I bring up in the next installment of this series?

Comments down below. Sorry if this article was a little bit thin, but you see I’m in a cantina in Mos Eisly right now as I write, having a rather obnoxious Gamorrean bothering me. I think I’m gonna call for my Wookie girldfriend Tegharra to come and knock some sense into him^^

For the chupacabra all you need is Benjamin Radfird's definitive work "Tracking the Chupacabra". Beginning to end it's all there. Many other cryptids are in "Abominable Science"

Imagine a creature with a long lifespan, the ability to rip your arms out of it's sockets, Sentience, a probably higher level of intelligence on average than Humans, then give them the ability to use the Force and a Lightsaber. There's a comic or book where a mook lamentingly comments on this, pretty much going "Oh that's not fair." or something.

I just lost at chess against a Wookie, because I used the prudent strategy... ;) For suggestions, I'll just jot down whatever fantastic creature I can spontaneously think of: [better-known ones] dwarves (heigh-ho! heigh-ho!), elves / fairies /fair folk / sidhe (which would mean grouping Northern and Celtic varieties together, and I would recommend sticking to the original myths), unicorns (d'aaaw!), aliens (the Roswell-visiting, UFO-flying, people-abducting kind of modern urban myth perhaps), ghosts (poltergeists, spooks, bed sheets with eyeholes - a lot of choices here) ----- [not-so-well-known ones] chupacabras, the black dog, Albs/Alps (we've got a community member, Amelius, who is an expert on them), the Klabautermann ----- [no idea how well they're known] trolls (the original Norse ones, not the internet forum or fantasy ones, which is why I put them here), amazons (the ancient sword-wielding female tribe, not the bookselling tax-avoiding kind). I'd love an article about elves.