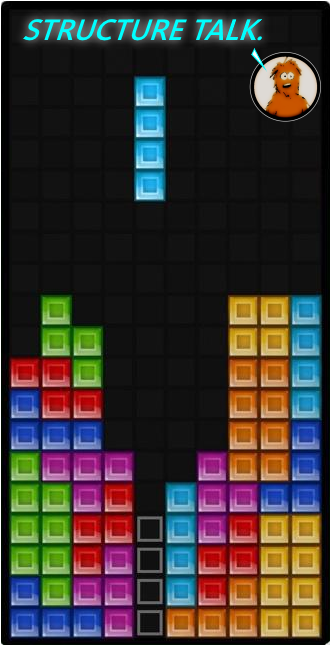 *note to self: come up with better title before upload time. don't look like a FOOL again!

First, remember to vote in the Drunk Duck Awards! There's only a week and a bit remaining before the voting booth is closed. Remember, you can vote for the same comic in multiple categories, (but don't vote one comic for ALL categories), and you can vote for any comic that posts on the Duck - but not for your own comic.

I was chatting with El Presidente ozoneocean the other day. We were talking about the changing face of TV over the decades, and how the structures that have dictated these stories are, maybe, beginning to change.

For most of the existence of TV shows, they've been structured according to commercial breaks. A TV writer's room doesn't structure an episode with Act 1, 2 and 3 (although they might think that way in a sense). They are building their stories according to: Cold open/teaser (if the show has that) and then acts 1 through 5 or six, depending on how many commercials fall in the hour or half hour.

Because that's how the audience is actually experiencing the show.

Just like B, C and D plots, as we discussed on the last podcast, the commercial break is a built-in cliffhanger for the audience – and that's part of how the story is structured: the final moments before the show cuts to a commercial hopefully leaves the audience on the hook and not clicking away to another channel.

Okay, I wandered off a bit. The point is supposed to be structure - the TV structure of commercials and time limits is changing with the advent of streaming, and before that, premium TV channels like HBO that air commercial-free episodes. Even regular cable now frequently have extended episodes of shows. Episodes are regularly five, ten, fifteen minutes longer than their normal.

This is mirrored in comics online - many of us stick to a print-sized page, roughly at least, but plenty of webcomic creators play with page sizes and formats that make more sense for the way the comic is being read.

I know that some TV writers still write with those act breaks in mind, even though the episodes might be seen without commercials. A story still needs some kind of shape to it.

I have seen older shows that used to have strict episode time limits come back to streaming and kind of fall apart, though - shows that used to be tight and jam-packed with story and seemed to race by now being free to extend their scenes and shows and become very draggy and a slog to get through as a viewer. This is not good obviously!

What's the point of all this? Not sure; maybe it's that structures can change as technology changes. This is not a bad thing - it's a necessity! But I do think that some kind of structure can be helpful to put free floating story ideas into some kind of shape and form that will be digestible and enjoyable by people.

I think of the rhyming, repeating patterns of poems or songs, or the four-panel structure of cartoon strips. The structure itself can have an appeal to the audience.

Even though we have much more freedom to make our own structures, SOME kind of structure is helpful to think about when making our stuff.


Okay, see you next time!

This said, I love the infinite canvas option to get a one page = one episode form that moves fluidly (and as a bonus allows you to make panels as large and detailed as you want). This works great for everything that can be read in a kind of single, organic flow, like one-plot shorts and gags. I found that avoiding blank spaces and arranging stuff as a free-flowing controlled chaos works best for me. Another important point, as stated by EssayBee, it enables you to stage your surprises very effectively - the alternative would be drawing out things so the punchline is on the next page, which is tricky to pace especially in webcomics, where it might mean readers have to wait for a week until you get what all the previous shenanigans were about. It probably won't work for every type of story, mind you. For longer, complex stories I certainly prefer the old school comic format with pages and bordered panels, just so as a reader you always know where you're at.

Structure is the one thing that glues a storyline together, and humans are creatures of habit, so a familiar structure is half the battle if you want to make your plots halfway easy to follow. It had been practically mandatory for stage plays to follow the five-act structure today known as Freytag's pyramid (exposition, rising action, climax, falling action, resolution), closely linked to Aristotelian principles, for centuries until someone even questioned whether it makes sense for a plot to work with less. I can recognise all of this in just about every TV show ever filmed. It's THE LAW, and while you can somewhat bend it to your purposes or even sometimes break it in one or two points and get away with it, you will very probably fail if you ignore it.

One of the problems I've run into when trying to reformat page-layout comics for vertical scrolling is font size and page widths. Some vertical scrolling sites have width maximums of 800 pixels, which is far under what I format my pages at here at The Duck, so I have to downsize panels if they're a full page in width, which means the fonts likewise are downsized. Since fonts and bubble arrangements are already designed for the current page size, I can't increase font size without covering the downsized image, so I gave up on trying to format Fusion for a vertical scrolling site. That said, I do like how vertical scrolling allows for contents to reveal as the story moves (no inadvertently spoiling a reveal by seeing a panel or two ahead), but it's a format that you really need to take into consideration when deciding on formating your text and images.

@Ozoneocean I agree with all of this. One problem I've had with scrolling comics is the lack of any real layout. With more traditional comic structures panel layout and progression are themselves an art form, leading the reader's eye throughout the story and helping to create beats and pauses that are essential in a visual medium. Scrolling comics don't HAVE to lack artistic layouts - there are several that make EXCELLENT use of the format to really create a fantastic impact for the reader - but the general use is just one panel on screen at a time and pauses are created by having large empty spaces between these panels, a practice which I as a reader find very annoying. I don't dislike scrolling comics at all (I even experimented with making one at one point) - but I think there are things traditional comics can do much better than scrolling comics (and vice versa, variety is great!) And I agree with you than traditional comics are always going to be worthwhile for this reason.

Takes note of *You arse-faced sausage stuffer!* for future use.

I need many natural pauses in stories. It gives them a good rhythm. I read a lot of novels growing up. The best writing formats for me are short paragraphs to help my eyes land on the pages, and short chapters or scene breaks. It wasn't because I had a short attention span. It both gave me that "completion catharsis" and a place to put my bookmark. Webcomics have an interesting reading format since most are consumed one page at a time, so each page needs to feel fulfilling while we await the next one. I am happier with full page "story comics" than the serial comic strips ran in the newspapers. Three-four panels a week is a pretty rough way to tell a story. (Great for a gag but not a drama.)

Some might say that we should move with the times and change our comics to vertical scroll only format because the older book style is rooted in tech we're not even using. To that (strawman that I've just set up for myself haha) I say "Shutup you inveterate imbecile and cease your interminable blatherings! You arse-faced sausage stuffer!". My reasoning is that it's perfectly good to use legacy formats LONG after the reasons for their invention ceased. We STILL use letting styles that were developed by the Ancient Greeks! Cars are still as wide as old horse carts. Most songs are STILL 3 minutes max, even most TV shows are still just over 23 minutes long. Comic pages are a format that works on our phones, computers and tablets the page fits perfectly and is easy to zoom into. I say the the old format can happily coexist with the new scrolling one.

I agree! Structure really helps creativity in SO many ways and it IS the technology that dictates these things- as in music. Why are most songs 2 to 3 minutes long? I'm not sure but I think it had something to do with radio play and ads, because they had to pack songs into specific blocks of shows with enough time for intros, outros, ads and DJ waffle... Albums were all a certain length because that was all that would fit on Vinyl records. Album technology used to have A and B sides and that changed things too- people put the crappy and experimental stuff on the B side and the radio friendly stuff on the A side.