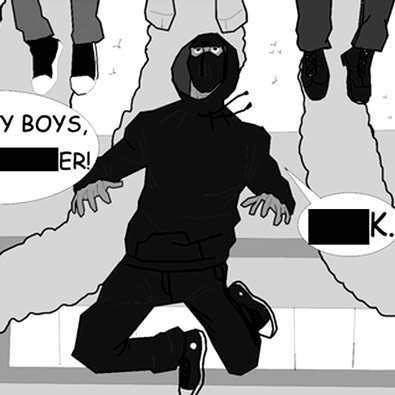 Danny is a bit of a pot-head, apart from that he's just an average high school kid. That is till he falls through a hatch in the ground and suddenly discovers he has super powers! He starts cleaning up his neighborhood and getting rid of the local gangs, only to run into some bigger fish and find himself the target of some heavy attacks. This is a superhero origin story, there's a little more violence and swearing than most. The writing is very compressed to the point that some parts are skipped over, and the art is quite simplified in places- the figures and faces are great and look pretty cool in the way they're stylised but machines and architecture are sometimes too simplified. It has an interesting format, being a too panel strip, so it's good for quick reading and would fit well as a traditional newspaper comic. The art is all greyscale and digital.