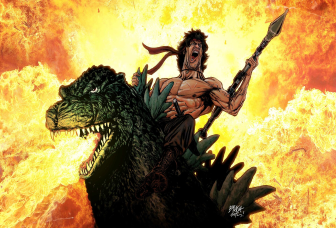 Like the pic I found for this post? I personally LOVE what I see on this pic. Credits go to brazilian illustrator Marcelo Braga. He has a website where you can see this pic up-close in all of its glory, as well as more of his work HERE.

I mean, what can more visually describe the subject of warcries other then a roaring John Rambo, with a bazooka, riding the friggin’ Godzilla setting everything on fire. Oh yeah!!

Let’s face it, folks. In any no-bars held action kind of fare the warcry is the cherry on top of the action sundae. You need your guy or gal, wether he or she wears camouflage pants or an armored loin-cloth, to give off a nerve shattering yell of the purest and most infernal rage that sends the enemy pants-wet fleeing in terror, and make the gods of war weeping-down-their-cheek proud.

Now, we’ve seen many different varieties of the warcry throughout history and throughout the world of fiction.

It can be just a guttural yell like the one we see RAMBO deliever, or it can be this really cool ululation vocal trill like the one delievered by XENA THE WARRIOR PRINCESSE, or my personal favourite, the shriek-ish, literally-trying-to-yell-his-guts-out yell that B-movie action star REB BROWN delievers in some of the movies he’s starred in.

Or it can be more of a signature word or name being telegramed, like the ones in G.I. JOE. As someone who’s seen Kull the Conquerer (1997), starring Kevin Sorbo and Tia Carrere, I can comfortably say that the movie is next to complete trash, but I did like that the barbarian hero of the film yells his own name (Kuuuuuuull!!!) as his signature warcry, while swinging his mighty axe around on the battlefield. I don’t remember Conan ever doing that.

It is reminiscent of real-life warriors yelling phrases with the name of their deity, susch as the “Deus Vult” (God will's it!) of the crusaders, or just the name of the deity, like the “Allah! Allah!” of muslim warriors throughout history. The ancient greek warriors had the “Alale” warcry, which the athenian warriors of the time apparantly adopted to emulate the sound of the owl, the bird of their godess Pallas Athena.

Then of course there are several varietes of pitches and rythms that have been applied to the hostile, primal yell of battle throughout history. Some warcries have had this ululating feel to them, almost as if they're trying to emulate wolf howls or bird shrieks. Others are more of a guttural, growling noise to emulate something closer to a bear or thunder. In Reb Brown's case he seems to have been trying to emulate the roar of Godzilla throughout his whole movie career with that insane yell of his, which makes this pic all the more fittingXD

I'm sure there is more to the subject, but that is what I’ve picked up through my encounters with the concept of warcries.

So what do you guys think of it? Do you too think warcries are awesome? Do you incorporate warcries into your stories in any particular awesome way? Do you have any specific preferences, or maybe even insights, regarding warcries?

@Andreas- That was the inspiration. It could also be used by Bronies. (Some crossovers should never be imagined, but I can just picture a bunch of WoW fans and Bronies yelling out "For the Horde" and "For the Herd" as they rush to fight at a con)

@kawaiidaigakusei - I haven't seen Full Metal Jacket. Is it the one in this scene? https://www.youtube.com/watch?v=py_h3yTxcWI

@Corruption - That makes me think of the "For the Horde!" warcry in Warcraft

@MOrgan - I forgot that superheroes do warcries too^^ Which reminds me of the "Yabba-Dabba-DOOM!" of Badrock in the Youngblood comic series.

@bravo1102 - It is an iconic warcry. Lucy Lawless apparantly got the inspration from watching arabic women performing a ululating vocal trill at a funeral, and as she tried to emulate that she ended up twisting it into her own version of it and so it became Xena's warcry. Here's a YT marathon I found of Xena fans doin' it https://www.youtube.com/watch?v=hYauZ_q7PHA

I like the War Cry from Full Metal Jacket.

They can also be a bit fun when used appropriately. In an adult CYOA story site I am on, is a story where you be different characters in a VR game. One is a bull (Story line clean so far). His farm is being attacked by a massive pack of wolves, but he is leading the cows in a stampede against the wolves. I added a short chapter where he bellowed his warcry which his herd repeated as they bore down on the wolves (as a solid bovine wall of death, ground trembling, the dust they stirred up dimming the sunlight from behind them.) The area resounded with their warcry "For the Herd!"

As for warcries not yet mentioned, The Thing's, "It's Clobberin' Time!" and The Tick's, "Spooooooooon!"

I think the only thing more awesome than that pic would be Godzilla holding a rocket launcher riding the back of Chuck Norris. ;-) On the less awesome side a washed-up Arnold Shwarzenegger with a slingshot riding the back of Gamera. ;-)

Morale is all about those little phrases or sounds called war cries. From "hooo-rah!" "Hoo-uh" to "Armor rules", "forge the thunderbolt", "treat'em rough", "Black Horse", "Airborne" ! They're all over. So they have to be addressed in my current comic. It's a battle girl league of super warriors-- gotta be warcries in there. Lucy Lawless' ululation is so epic just had to pay homage to it.