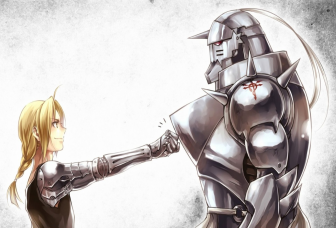 I talked last Sunday about science engaging with the supernatural in fiction and the worldbuilding stuff that can be generated from that. In this article I’m going to talk about the opposite end of that spectrum. The supernatural engaging with science. This is where I bring up Alchemy. Now, historically alchemy was a branch of natural philosophy which was sort of a forerunner of what we today call science. The main purpose of the alchemist was to purify, mature and perfect certain forms of matter.

The transmutation of base metals, a process also known as chrysopoeia. The creation of remedies that can cure any disease. The creation of elixirs that can bestow immortality. The creation of an alchemical Magnum Opus that could purify the body and soul. The mythical Philosopher’s Stone was said to be able to achieve all of these projects could this matter be located or produced. Both islamic and european alchemists developed basic laboratory techniques, theories and terms from all this, some of which are still in use til’ this very day.

The late medieval alchemy played a key role in the development of modern science, particularly in the field of chemistry and medicine. All this sounds quite amazing taking in that some of these things that we take for granted today came from a philosophy that made so many of its projects sound like a very think-think form of abrakadabra. Which is why it to me feels like it could, particularly in the world of fiction, be translated into a scientific form of magic.

This I feel becomes all the more clear in works such as Full Metal Alchemist. I haven’t read the entire manga series, but I did read a few of the first volumes of it back in the day. Set in a steampunk-like world where goverment employed alchemists have the ability, with the help of patterns called transmutation circles, to create almost anything they desire, provided that they possess something of equal value in accordance to the Law of Equivalent Exchange.

And so we get these epic alchemical battles with the main protagonis, Edward Elric, transmutating his surroundings as weaponry from that. Teamed up by his brother who is spiritually fused to a near invulnerable metal armor. It is essentially magic, but with a heavy logic attached to it. It’s ”magitech”, like Usedbooks coined it in her comment on the last article, bringing up JRPG:s where they have modern machines that is powered by some kind of spirit force instead of plain electricity .

And just like with science incorporating the weirdness of magic, I believe it is a concept that has the potential of generating tons of cool stuff and thinky-fluff. Like another example: The Science Fantasy tabletop RPG Numenera, and its world full of nanites that certain beings in that universe can tap into and control, making technology so advanced in that world that it is indistinguishable from magic. I’ll close this off by bringing up an example of how I intend to use scientific magic myself in my own works.

In my comic Imsies: the Imthology there is going to be a story involving a race of Imsies that takes these cute, little rock-shaped imsies and magically transforms them into spiritual augmentations and prostethics that they replace their original bodyparts with. The rock-imsies still being alive and now fused to another entity. They also have this magical process where they take out a fellow kindred imsie’s essence of being, his/her soul if you will, and places it in a body that is a ragdoll made out of sown together cloths, and this ragdoll imsie is thenafter part of a servant race of ragdoll imsies serving that imsie race. And with that I rest my case.

So what do you guys think of it all? Is magic with some kind of crazy science attached to it a thing that appeals to you, or does it sound like bogus? Have you incorporated magitech (Or mathemagic) into your worldbuilding perhaps?

Let me know in the comments. And also let me know if any of you have found or invented the philosopher’s stone yet, and we’ll use it to transmutate the stupidity of the world of today into a brighter future.

Time could also be a factor why true magic is forgotten. Magic is suppose to make life easier. Are we not doing that with science? Think about this… what if you were the only one that could do real magic in every way possible. You would have the knowledge, the skills and the temperament to do real magic. Now picture everyone else looking at you doing true magic. Their imagination would run wild about what they think is magic. Now picture that setting happen 3000 years ago. Who would study under you to carry on? And with each generation from that time, how much of that knowledge survived as true Magic? The only real testament are the stories of ole. We then guess what “magic” is or not. If magic is real then I believe it was lost in time and became unpopular because it was not easy to do.

I agree with Ozone. But if magic is a repeatable wouldn’t slight of hand be a form of magic? We call it magic, right? Magic, yes is fictional but even in a World of magic, are they not also Proven In the magical realm? I mean magic and science is a skill. In our world magic is dismissed as fictional because of our imagination of what we think is amazing to look at and powerful enough to be very dangerous with no explanation how it is happening. The reason most of us don’t believe in magical things is because 1) we don’t know how to do it. 2) it’s not easy to obtain. 3) we are going by what others believe what magic really is. 4) there really is not much true knowledge or true facts on real magic. OR is there? What if it’s an old science that is forgotten like many old languages? With Fiction there is some truth behind it. Even if it’s 1% or less. Why was it forgotten? My guess is time and popularity shifts. Magic could have been unpopular as a study because not many could do it.

The main difference with ideas of magic and science in our world with how they developed and differentiated and magic and science in fiction is that there's no such thing as actual magic in the real world while magic CAN exist in fiction. You can say that science is basically magic that has been explained but that's not really the case, it's rather that people come up with wild theories and imagined processes for why things happen but science is the opposite of that- it's functional, repeatable proof for why things happen. Science isn't the thing, science is the processes for finding the explanation for the thing. Magic is the made up, culture, intuition and imagination based explanation for a thing.

Really magic and science have been intertwined ever since both of them ever existed. Both are knowledge for only the special, and both allow its users to command fundamental forces. The blending of the two has long been a source of inspiration for stories, whether called alchemy, mad science, or any other similar title! Much does seem to depend on the spiritual or outright mystical framing for either.

There also used to be the kind of astronomer who would make horoscopes in order to fund their actual astronomical research. Telescopes were and are expensive, after all. That's the second way of looking at it, and I see a lot of story potential in a daytime charlatan using the funds to make revolutionary discoveries in their time off. (This may get especially interesting in a universe where the BS they pay their enormous electricity bills with suddenly turns out to be the real thing.) For most stories, I would say however that astrology and alchemy and mystical sciences are quite a thing of their own, rather than science or magic, but should be treated like magic for all practical purposes: it's just the way your fictional universe works, and that's that. Once you present whatever it is as a branch of science, you'll have every single nerd in the world against you, who will then demand explanations, which in turn will create a 99.999% probability that you'll tie yourself up in knots.

There's two (or actually three) ways of thinking about things like astrology and alchemy. You can see them as a kind of proto-science that still hasn't shaken off the old superstitions of past eras, of course. John Dee, Giordano Bruno, Johannes Kepler, Sir Isaac Newton - you name them - never thought of magic and experimental science, astronomy and astrology, respectively alchemy and chemistry as different things, although especially Kepler and Newton were key figures in establishing a scientific methodology as we know it and effectively helped creating sciences both as disciplines and contexts. Kepler was the first to accurately explain planetary motion in mathematical terms, but one of his major motivations was making better horoscopes. Newton was instrumental in converting natural philosophy into those physics that we know from school today, but he devoted a lot of time to find the philosopher's stone, assuming that it doesn't work just because "further research is needed".

Much common science fiction is full of advanced science that from a hard point of view is so much magic. Faster than light travel? Beam weapons with no heat problems? Techno babble that might as well be abracadabra.

Clarke's Axiom. A sufficiently advanced technology will be indistinguishable from magic. It's like how astrology became astronomy. The stars were still magical but had their own unique story to tell and were not an auger for the human world. Alchemy became chemistry as transmutation wasn't attainable but other magical things were created instead. Other seemingly magical effects were generated and explored. The sense of wonder is still there in science as it really is not a reductionist world view like materialism because there's still a lot of awe in how things work even with the tricks explained.

On a different note, my favourite "treat magic as science" story was Orion by Shirow Masamune (the author of Ghost in the Shell). It is short (1 tankobon) but it is mind boggling, as usual for Shirow.

Astrology is a kind of magic (divination) that gave rise to astronomy, however the difference between the two is that astronomy is based on a purely mechanicistic worldview, whereas originally astrology was based on the idea of gods. A similar difference exists between alchemy and chemstry. If you take away the spiritualism from magic it is not magic anymore, if you add spiritualism to science it is not science anymore.