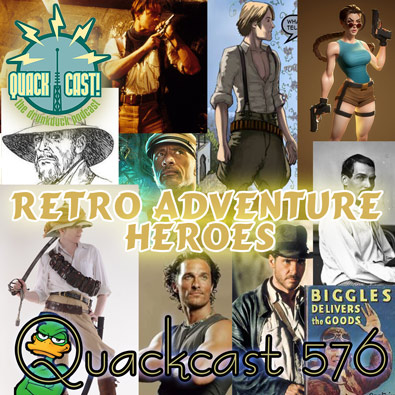 Retro adventure heroes are an interesting and unique sort of hero. The trope was revived and crystallised by George Lucas and Steven Spielberg with Indiana Jones, but it had existed long before then and continues to persist now in many forms. They're not without their problems But I like these characters. I love their outfits, their competency, intelligence, self sufficiency, and their penchant for exploration and discovery.

What is a retro adventure hero? Typically they're an adventurer, a member and representative of a powerful Western country, they like exploring, they're self sufficient, they can survive by themselves in the wild, they can fight, understand many languages, have arcane knowledge of and respect for native peoples and different exotic cultures, they tend to be very worldly and highly educated. This trope was inspired by real life examples, typically explorers from the 19th century, foremost among them was Sir Richard Francis Burton. He was highly educated, a soldier, an explorer, a swordsman and a shameless self promoter. With the explorations of Burton we have the romantic idea of a representative of the British Empire and Western civilisation delving into the hidden worlds of the Arab east and darkest Africa.

A partial influence for Indiana Jones was the story of GE Kinkaid and his 1909 find of the remains of a fabulous city accessed through a cave in the Grand Canyon… all sponsored by the Smithsonian institute. Of course nothing about the story was true and GE Kinkaid never existed, but it was quite inspiring nonetheless. My own character, Ace Kinkaid, from my comic Pinky TA was based on GE Kinkaid. Instead of going in the Indiana Jones direction of a “true hero” I decided to take a different tack- since the story was clearly made up and quite stupid (obviously designed to fool people), I made Ace Kinkaid someone who wanted to look like a hero but was in reality a con-man, only out for himself.

The most important fictional retro adventure hero is H. Rider Haggard's “Allan Quatermain” (I wrongly say he was Edgar Rice Burroughs' character in the Quackcast). He's another huge influence for Indiana Jones. There are many other popular fictional retro adventure heroes though: Brenden Frasier's character in The Mummy, Romancing the Stone, Lara Croft, El Borak, Steve Canyon, Biggles, Bulldog Drummond, John Carter, Dirk Pitt in Sahara, Flashman (though more of an antihero) and many more, even The Rock's character from the recent Jungle Cruise.

Why “retro” though and how can contemporary characters like Lara Croft and Dirk Pit be retro? Well there are a few reasons; number one is that they follow the clothing conventions of a lot of brown, leather, and straps; number two is that they have all the right competencies with fighting ability, self sufficiency, a penchant for adventure and exploration, visiting ruins etc, a good education…; number three is that they come from a retro world view of imperialism, so they can be a representative of the “enlightened modern world” going off to “discover” and explore exotic places - which of course aren't exotic or in need of discovery from the point of view of the locals.
This trope can still work just as well in a modern setting because we still continue to think like this, but it works best in the 1920s/30s for a couple of reasons: The aesthetic then is perfect, but this was also the end of the old imperial era. It marked the end of the time when we could still imagine representatives from “western civilisation” exploring unknown places, technology was at the highest point for characters of this trope (aeroplanes, machine guns, trains, steamships…), and many of the original adventure heroes were created in this period because we were romantisising the idea of adventure and empire while it was ending.

After the second world war scoured the entire globe and the last gasp of the dream of empire was shattered, the far reaches of the earth no longer seemed exotic anymore or to hold the same mystery. Retro adventure heroes had their hey-day in the transition from colonialism to post colonialism. We like them now for the romanticism of the image of what they were and the spirit of adventure and exploration, that's what we emulate rather than the distasteful idea of a colonialist imperial cultural ambassador, tourist, and thief.

Do you have a fave retro Adventure hero? If so, who? Do you even like the trope?


This week Gunwallace gave us a musical theme to Caveston - Authoritative violin pronounces and directs. A four stringed general deciding the course of action, laying out the battleplan. Electric guitar listens well and leads the squad on a furious audio assault! Storming forth and prevailing in a mighty show of shock and awe.

Wow! It was a surprise to receive such an amazing theme for our comic! Special thanks for Gunwallace, wonderful work.