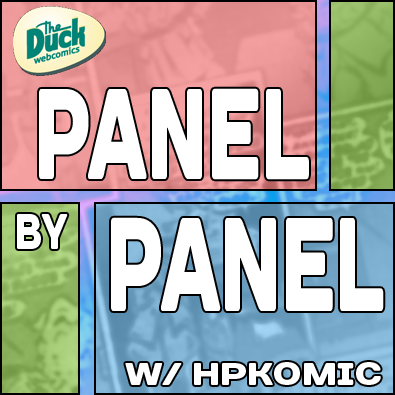 Hello and welcome to Panel by Panel, an analysis of panels from comics right here on The Duck and exploring what they do, how they work, and what we can learn from them.

This week's panel comes from the Ghastley Heights strip “Pamphlets.” This comic is by IronScarf. Let's take a look at it real quick. 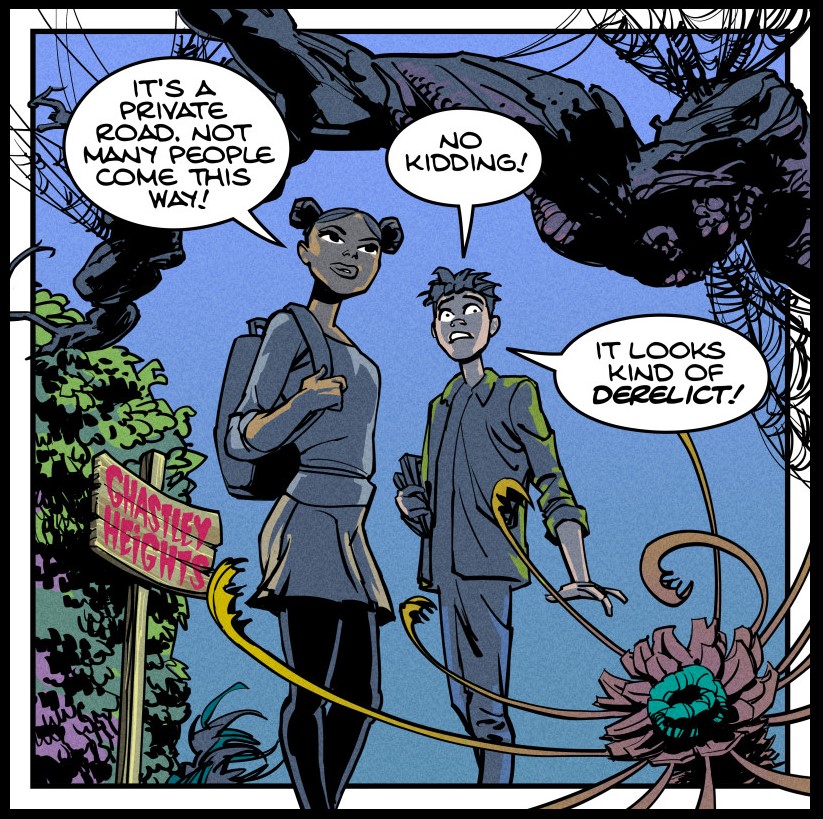 The topic today is using framing and why I feel this panel is a great example. Framing can have a few different meanings, but for our comic-specific context, let's just think about it as the arrangement of objects in a panel to lead the eye around. In this case, we should also take into account the idea of a “picture frame” where an image is placed within an object to draw attention to the image.

We can see this prospect present in this panel, as our two characters are in the center of the panel. Notice the arrangement of objects within the panel around them as well. The branch hanging overhead, and the bushes to the left side of the panel, are effectively boxing in the characters within the panel. Given the panel's aim of depicting the idea of the path ahead as foreboding, the crowding here makes a ton of sense. It's very effective.

But let's take it further. What about the overlapping flower? The flower, even though it intersects the characters a bit, still creates a feeling of crowing not only on the right-hand side of the panel but also creates a z-axis effect. This foreground object not only helps establish the oppressive crowding around the characters but cleverly establishes the path ahead of them is dense and dangerous.

I would be curious to know if there was a conscious acknowledgment within the framing of the page by Ironscarf that the dialogue balloons also drive the eye inward and box in the characters. The positioning of the balloons makes sense where they are, to begin with, but was it after the panel was drawn, or were the balloons accounted for in the thumbnailing process?

And that is it for now. Please share your thoughts on framing within panels. How conscious are you of this sort of thing in your own comics? Please feel free to share examples of framing in your comics as well. I would love to see them.

Also, be sure to check out Ghastley Heights.

What a wonderful idea! It's great to see an article that talks about the comics here rather than what's going on in the world outside the Duck Pond too.That's a great panel to start with and so beautifully done I could hang something like that on my wall!. I don't normally mess with my panels a great deal but I do find that removing the sides which 'hem' in the sky seems to work well in exterior shots as it suggests a larger area beyond. Definitely following this one! XD

@dragonsong12, I appreciate you wanting more, but I want to save some material for future posts! That being said, more examples can be fun. I am just feeling things out right now. @Ironscarf, I decided to do this one after I posted my review of your comic in the forum. I appreciate you responding to the question I raised in the post as well. @Banes, those puns are horrendous.

This is a good breakdown. To the extent that I actually wish the post were a bit longer and had gone into some additional examples, because I imagine this comic has a lot of good ones. This element of design is something I struggle with a lot. It feels so simple on the surface, but when you actually sit down to do it it's pretty difficult. I love seeing good examples because it keeps inspiring me to improve. Comics are a visual medium after all, and the "language" of the art (including layout and design) are just as important to the storytelling as the dialogue is. Getting these reminders of how well they can work is a great asset.

Oo, this was a surprise and great fun to see your breakdown! I actually did a kind of remake of this panel on my latest strip, but with the hint of a suburban background, which does indeed create a very different mood. To answer your question, the word balloons are definitely part of the thumbnail process and sometimes I start with the position of those as a guide for the panel layout.

Very interesting stuff again! Ironscarf is very a highly skilled and talented chap, to be sure. Also, little known fact: Ghastly Heights does not use a ghost writer, but does have a Skeleton Crew. Quite scary!