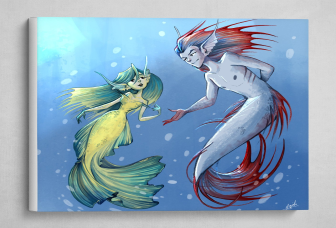 Recently it struck me. So far I’ve already brought up two water-based mythic beings in this series of articles, and non of them were mermaids. Which is why I’ve decided to talk about them here today. We’re pretty much all familiar with mermaids. Though maybe not as familiar with them as people such as the sailors of Cornwall, England, are. There’s a peninsula in Cornwall called ”the Lizard” that has a high plateau surrounded by sea, with a lot of beaches and coves from where a lot of mermaid stories have been spun.

Many of the people living near and around this region have claimed to have seen or heard a mermaid and believe that they were once widespread. They tell stories of mermaids sitting weeping and wailing on the rocks and on the shores. We shall get back to this later, but right now lets talk about the mermaids themselves. Traditionally we know mermaids as these legendary, aquatic creatures with the upper body being that of a human female and the lower body being that of the tail of a fish. The male version being traditionally known as mermen. Although some mermaids are described as hideous and monstrous, they are usually depicted as very beutiful. Mermen on the other hand are often depicted as hideous and savage, as well as having little interest in humans.

Depending on the tales and from which region the tales come from mermaids can be portrayed sometimes as good and helpful, sometimes as mischievous and playful and sometimes as hostile and territorial. Sailors are generally encouraged to avoid contact with mermaids and be very cautious should they ever encounter one. As for their hobbies, mermaids enjoy singing, combing their hair and lure sailors to crash their boats into rocks. If said sailor happens to be a handsome young man however, a mermaid might try to hook up with him and have him come to her home in the deep sea.

Not so surprisingly this will often cause said man to drown, but sometimes said man will magically survive to see the underwater kingdom of the mermaids. Generally seeing a mermaid is considered a sure sign that a violent storm is coming, as mermaids are often accused of sometimes telling sailors their ship is doomed, sometimes enchanting sailors and sometimes outright causing shipwrecks. They are most certainly believed to send you misfortunes if you are unkind to them in any shape or form. However, mermaids are also said to bring good fortune by giving humans cures or, in some tales, grant them wishes.

Going back to Cornish tales of mermaids. Their depiction of mermaids is like most depictions of mermaids that we are familiar with, but with one possible distinction. Cornish mermaids are generally more curious about humans and sympathetic to their plight. As such there have been tales of people obtaining gifts from mermaids, such as that of the knowledge of healing, or the future, or some supernatural ability that they could pass down. For example, one could be revealed the face of a thief when fixing a boat, a common means of detection in many of these myths.

In some legends mermaids even marry and live with humans. One example of this is the Irish and Scottish legend of the Merrow, which are said to be beutiful, gentle, modest and kind mermaids. They wear a red cap and, if this is captured and hidden from them, they will shed their fish skins and start to walk and live on land. Most times however they eventually retrieve the cap and return to sea. They are also the kind of mermaid that will seduce young men to follow them beneath the waves where they will live with the Merrow in an enchanted state. Merrow music is said to be heard coming from beneath the waves.

Now, the islands of the UK and Ireland are of course not alone in producing tales of mermaids. Pretty much every sea-faring culture in history have spun tales about mermaids, especially around the Aegean sea. Greek mythology are stock-full of mermaids of all sorts. One being the Sirens that lures sailors to their doom with their singing. Another being the golden haired Haliads who live in a silvery cave. Then there’s the sea nymphs who will help sailors through perilous storms. Also there’s the 3000 Oceanids, who are the daughters of the titans Oceanus and Tethys.

SImilar creatures to mermaids can be found living in lakes and rivers. In Slavic myth there is the ”Rusalki”, which are the spirits of young women who have drowned in said lake or river, appearing in the form of beutiful mermaids or fish-women. Like all other mermaids they have lovely hair, likes to seduce young men to live with them underwater, but are also said to have fathomless eyes that tells of their tragic tale.

And with that I’ll conclude this rundown with a bit of theory. Tales about half-human, half-fish creatures goes back thousands upon thousands of years. And most of these tales are likely to be based on the sightings of normal, but at the time unfamiliar, marine creatures. Such as manatees, dugongs or sea cows. For one these creatures will often appear to cradle their offspring similar to how a human cradle a baby. Behavourial patterns like that may have confused sailors to think they were seeing some sort of humanoid creature that lived underwater.

Christopher Columbus once reported seeing three mermaids in the ocean of Haiti, in January of 1493. He said quote ”came quite high out of the water”, but were ”not as pretty as they are depicted, for somehow in the face they look like men”. In all likelyhood Chris here was describing the adorable faces of three manatees, who’s species were native to the waters of Haiti even back then.

So what do you guys think of manatees–er, I mean–mermaids? Do you think they should encroach upon the Djinn’s hobby of granting wishes? Does your creative works have any mermaids and/or mermen in it? What fantastical creature or entity of fiction or myth, any fiction or myth, would you like to suggest that I bring up in the next installment of this series?

Comments below. No, not that far below! Seriously, if you’re gonna follow that mermaid instead of this comment section, make sure you bring scuba gear and an oxygene tank with ya’, okay!

Way back in X Up issue 12, I did a little mermaid tale called "Play Time" posted here on Drunk Duck November 23, 2009 (https://www.theduckwebcomics.com/X_UP/5194140/). There are several follow up stories kicking around in my head and in various design stages. I'll get to them some day...

Always love and facinated by mermaids of all sorts. Actually dated one. Well, she wasn't mermaid when I knew her but she later became one and worked at Weeki Wachee, in Florida (https://weekiwachee.com/). A place you can see mermaids and enjoy all sorts of Florida fun.

Don't forget the fossegrim and various others! Merfolk are interesting, but nicely we're seeing more representation of not just the standard mermaid type.

Mermaids may be a hidden allegory about going to sea back in the day, in that they, like the wide ocean, beckon you with the promise of adventure and untold riches, while at the same time there's always this prospect of sudden demise, a danger beyond anyone's control, that old, experienced people warned you about, but which you choose to ignore, because they’re just too sexy to resist. I've actually got a long fantasy story in my desk which features a rather special, punked-up take on mermaids, but it's going to need a LOT of reworking before I can show it to anyone. Considering my current work pace, I may be one or two decades.

There are many plausible theories about the origin of mermaids and all of them revolve about sailors having been offshore for too long, and one could well apply similar theories to the origin of some webcomics... ;) But that's neither here nor there: I love mermaids! What's not to love about these tails, er, tales? Apparently, there is, considering the vandalism the poor little mermaid in the Kopenhagen harbour has had to endure over the years, something I could never really understand. The German word is Meerjungfrau, one of our typically clunky compounds, which literally translates as "sea-virgin". I think that highlights one of their most important aspects, which is either innocence (as in Andersen's tale) or seeming innocence to disguise a deep abyss of maliciousness. Which of the two is always ambivalent; you won't know until you're out there and you’ll ponder this even while you go down, the water around you becoming increasingly darker and squeezing the air out of your lungs...

In italian the same word, "sirena", is used to mean both mermaids and sirens. However the greek sirens were originally bird-women, they were mixed up with fish-women during the middle ages, when people in western Europe had still some retelling of the Odyssey but could not read greek anymore.