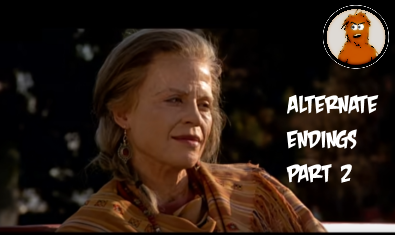 Last week we talked about alternate endings in movies like Army of Darkness, Clerks, and Little Shop of Horrors.

In the comments, you mentioned classics that I can't believe I didn't mention, including CLUE, which was made with four different endings to be played randomly in different theaters.

I'm not sure how well that worked out, and it's a pretty rare approach. The other example I know of is ‘Paranormal Activity’. It had multiple endings, and different audiences saw different versions. It's a neat idea, but my impression is that it actually annoys at least some audience members.

Most of the other alternate endings I know of involve filmmakers/studios being unsure of what ending will work, or work the best, or endings that were changed in preproduction/production, with original endings that were never filmed.

A movie I used to watch at least once a year was JOY RIDE, about young people stalked by a murderous truck driver. On the dvd there are four endings, fully filmed and edited. JJ Abrams was producer and cowriter of that movie, and I think he's somewhat infamous for not knowing how to end things. The endings are fairly different from one another, and the commentary is interesting as far as the different ideas behind the various approaches. I liked the ending they went with - it worked.

Lethal Weapon 2, one of my all time favorites, had a civil war behind the scenes, with the writer of the first and second movies wanting to end the thing by killing a main character, and to have a darker tone to the whole movie. The studio, on the other hand, wanted more comedy and a more open ending. It came out a great movie, and just in case you haven't seen it, I won't say where it ended up. The tone of the film is wonderfully dark, character oriented, AND funny.

Another fave was “The Burbs”, a comedy/thriller that we did a Quackcast commentary for awhile back. The original ending is much darker and creepier. The redone ending, which apparently the filmmakers knew was needed once Tom Hanks was cast as the star, is fantastic. It abandons the theme of the story, but it just hits the spot.

Of course, there are plenty of other movies that have altered endings/altered versions, like Blade Runner.

Multiple movies that I know very well and are really in my bones have now been altered on streaming services. Stuff is cut out, old alternate footage is edited back in, and for me, it throws everything off. The most upsetting for me was “Terminator 2”, which is an amazing film with an iconic ending. The version on some streaming services has a more definitive ending that visits the future of Sarah and John Connor. It's horrendous to me. I guess I'm biased, because of how special that movie was to me. I do understand the thinking that might have gone into this alternate ending. But the original ending, with the dark highway and the unknown but hopeful future ahead, is perfect. Seeing Sarah as an old woman, spelling out how their lives played out - ack! Ugh!

@PaulEberhardt: I've have alternate endings in three of my comics. One was actually in the comic, the second was written but not done as I just wanted thd comic finished and the third was actually the original ending. It was only changed because it was a cheap horror movie trope and I decided not to use it. One of the stories in Belle 's Best has an alternative epilog that a reader suggested.

Btw. the aforementioned alternate ending sequence in Wayne's World has had me in laughing fits every time I re-watched the movie - and since it's one of the cult classics that my friends and I used to watch excessively on VHS back in the day, it's certainly not the surprise that does it.

So many cool examples here and in the discussion... I get the impression that often an ending (or beginning or other scene) has to be filmed before you can really tell how it works with the rest of a movie. It would make sense, since that's the first time when everything - imagery, lighting, sound, atmosphere etc. - comes together. Perhaps trying the same in a comic might be worth considering - if there ever was time enough to draw anything you don't really intend to post.

On the flip side, Dark City--another of my favorite movies--has an alternate opening. The opening voiceover was added after the studio asked that some sort of audience hand-holding be added to the beginning to help ease audiences into the story. Alex Proyas happily obliged since he was happy that was pretty much the only thing the studio wanted changed. Dropping the voiceover was one of the minor changes made in the Director's Cut.

Close Encounters of the Third Kind had a new ending in the 1980 Special Edition, where the studio pressured Spielberg to show the inside of the mothership. Spielberg hated the idea, thinking anything he could show would not compare with what the audience would imagine from the original ending, so he's removed it from subsequent versions of the film. I agree with Spielberg and like pretty much all cuts of the movie better than the 1980 SE. (Not only because of the ending, but because the SE also cuts out some great character bits.)

A Playstation game called "Drakengard" was really incredible with the roads you could go down. You played a man named Caim who bonds his soul with a dragon to survive and fight against an ongoing war that is ravaging the lands. What was fascinating was the game went a normal route where you end up winning the war but the dragon dies at the end (normal ending). But if you are really fast in a much earlier mission the game goes a completely different path. If you go down the other path the game opens up more and you meet other main characters that have also made pacts with creatures to become strong and survive the lands. Caim lost his voice when he made a pact with the dragon. One woman loses her womb, another man loses his sight, and a boy loses his ability to age by pacting with a golem. But if you go down paths that EXTEND the story the path gets darker and darker. In one a love interest is killed and made into a monster, or the end of the world with giant babies eating the world.

I just remembered the alternate ending, in one territory - I think it was China-? It's the end of Fight Club. Instead of the empty skyscrapers exploding and collapsing, the film cuts to black with text that says the bomb never went off and all the terrorists were arrested xD

There was the joke James Cameron Titanic ending where everyone lived happily ever after with the Titanic arriving in New York :D 🤣🤣

Richard Crenna was a very good Troutman. As much as I love Kirk Douglas I wouldn't like him as Troutman. And if Rambo dies no sequels. Sly isn't stupid when it comes to creating a franchise. A lot of times alternative endings are floated because at the behest of the actors or according to their screen image. Again referring to Cary Grant in Suspicion. Any of the Cary Grant Hitchcock films went against his film image. Notorious also had a few rewrites and supposedly an ending where Ingrid Bergman died.

First Blood has a very famous alternate ending; like in the book, Rambo dies at the end. Sly wanting to change the ending to Rambo living is why Kirk Douglas left (originally he was to be Col. Troutman). Douglas thought the original, bleak ending was more artistic and true to life; Sly thought it was a horrible message to send to vets (i.e., suicide/death is the only way out). Personally, I think Sly's thinking was was the right choice.

Wayne's World. That played the alternate endings for laughs and it worked great. Especially the Scooby-Doo ending. There were concerns that the ending of Casablanca wouldn't go over so they tested it with audiences. Hitchcock had a few great alternate endings during his run in Hollywood though it turns out his stories of conflict with the studios may be exaggerated. Suspicion (1941) is a good one with a few alternate twists and endings.

Titanic's original ending comes to mind, thankfully it never made it in the final movie. And of course Brazil, which is an Orwellian nightmare packed into a dreamy haze from the mind of Terry Gilliam. They wanted to cut the final scene and leave it with a bizarre, nonsensical happy ending, which in itself demonstrates themes of the movie.