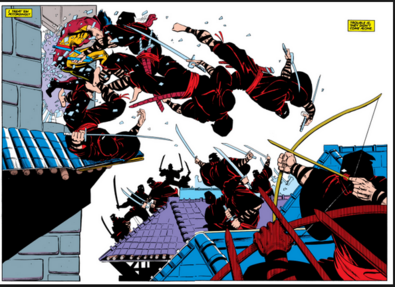 I was talking to my brother about writing scripts for comics and mentioned that I sometimes forget that what I'm writing can't move. I'd start accidentally writing as if it were a movie script, with characters moving around, then realize that I had to think in stills!

There are multiple ways to create motion, and action, in comics.

Still images give you the chance to choose the exact moment in time you want to show. Well, it obligates you to do that, really, but let's keep it positive, here! Showing the extreme moment, or close to it, can give the maximum amount of drama or excitement for a character who's running, jumping, punching or being punched, or whatever other kind of action you're showing. A fully extended fist, an extremely slanted line of action on the victim - motion and drama well expressed. Here's a panel from bravo1102's Belle's Best, here on the Duck 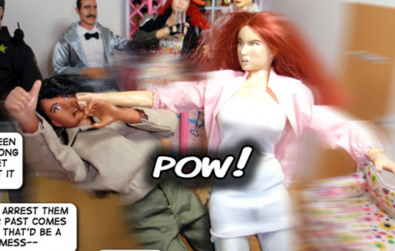 That image also makes use of a blur effect, which adds nicely. The blur is good for an extra aggressive, powerful motion, or one that's supposed to be particularly fast.

Before blurs were as doable as they are now, motion lines can show movement as well! Which parts of a character or object will have lines extending from them, showing the movement. This is handy to show a specific path an object, character, or part of a character, is traveling. 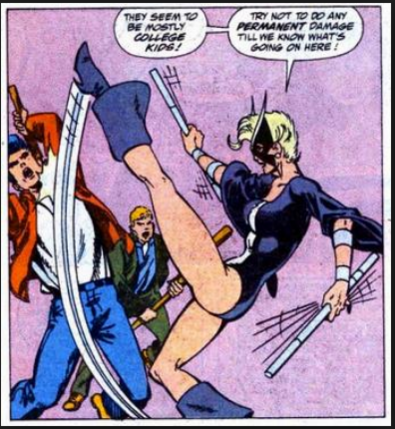 Of course, manga and anime will use motion lines as a background, to show movement/action.

The final way that comes to my mind is the multiple panel or multiple figure action. Instead of motion lines, we'll see several panels, laid out to appear as if they're happening quickly. 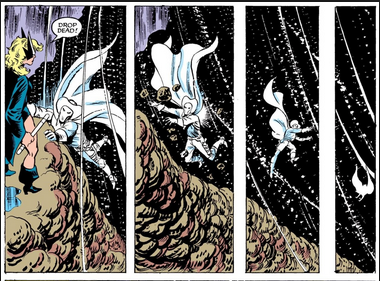 Or you can have multiple images of a character in different poses/locations in one panel, to show an acrobatic fight or travel through a series of obstacles, or whatever.

Are there any I've missed? There must be! How do you like to show motion, movement and action in your comics? What style suits you?

PaulEberhardt--Made me think of the distortion used a lot in Star Trek: the Next Generation whenever a ship made a jump to warp speed. (Although this might've been done to show some sort of time/space distortion and not just speed.)

@PaulEberhardt. Those are all things I already do, have done and advocated at length. Maybe you should just look at some of my work and see examples of action sequences in mid air and based on stills from sports photography and action movies. Maybe consider the work of someone whose panels really are based on photo stills. Nah.

Distortion may be an idea, too, as in bodies, arms and legs slightly bending in a rubber-like way, or - a classic for fast cars, but it also works with, say, a rider - slightly warping the shape so the top parts are shifted forward and the bottom parts back. If you imagine the car or horse as fitting into a rectangle at standstill, this rectangle would turn into a parallelogram. (Got to find an example somewhere, I'm not sure if I manage to make clear what I mean.) You used to accidentally get a similar effect with some old cameras whose shutters were basically a slit moving across the film plane, so the top part of the photo would be exposed a tiny fraction of a second later than the bottom (or something like that anyway). This won't happen with modern digital cameras where the problem is probably rather, as in comics, not making the action shot look as if frozen in time. I think sports photography could teach us comic artists quite a few things, and I wish I knew more about it.

I thought of the way old cartoon art can emphasize speed by drawing the character or vehicle not touching the ground. For some reason it doesn't suggest that it actually takes off, just that it's moving very fast. I think I experimented with that once or twice and found that it can make a big difference when it comes making the scene more dynamic. No idea why. The last example in this example kind of does that too, if you look closely.

Empowered is really special in many ways. Looking forward to an article about it.

Banes--Nice. I have a full collection of Empowered (it's my favorite series). All paperbacks, plus the 3 hardbound mega-collections. Then the individual special issues/mini-series. Just great stuff. Empowered and the DC animated universe are the two biggest influences on Fusion. If you need pics of Empowered books, let me know and I can send some your way.

@EssayBee - believe me, I got a hurt/offended message from Adam, and I promised to talk about him and Empowered in a future article. I love the look of that comic. Funny you mention it; I was looking at some collections of Empowered on Amazon just the other day!

No mention of Adam Warren? He uses some incredible hand-drawn motion blur in his work on Empowered. (His earlier work also has some nice motion blur; but the blur effects in Empowered are ridiculously good--especially considering it's hand-drawn and not a computer effect.)

The key to a good action pose is generally capturing the missing moments in between that the human eye can't see. That's what makes them so interesting. And if possible, you want to take the normal pose and push it past it's limits which helps express the power of the movement. I've got some examples of lines/effects on the sample pages I have uploaded here: https://www.indyplanet.com/necroblivion-vol-2

@jerrie - I think some moments don't feel right without a sound effect. Like, a lot of the time a punch, slap, gunshot, or whatever, wouldn't be impactful enough. Other times I think it works well with no sound effect...

I think sound effects with the action,are also important. when you read POW! or BANG! the pictures seem to move. the reader "Hears" the action, and can "see" the figures moving as he/she views and reads the comic.

@Ironscarf - that's true - a comic script can be written as a screenplay, especially if the writer is going to draw it themselves! It would work for some collaborations too. Actually I think the old "Marvel Method" would have Stan Lee write the story, then Jack Kirby or Steve Ditko or whomever draw the thing, wand Stan coming up with the dialogue after receiving the drawn comic.

Should also point out that the puncher is leaning forward. The blurs were done that way so the reader would be drawn to the other people in the room looking on. The speech bubbles are of a police officer working security remarking on the fight and why he's not interfering.

Honored to have one of my comics used as an example. Using the figures I can actually choreograph sequences by putting them through the motions. The panel shown is a reflex sucker punch to the face so it's thrown from the shoulder and elbow. She's not supposed to be off balance as she intends to throw a follow up left. Choreography and a natural flow of movement. Then there's watching kung-fu movies or Gene Kelly dance sequence frame by frame and mark the extremities of movement.

I think you absolutely can write as if it's a movie by the way. That's what I always do. You don't have to decide which stills to pick until it's time to draw. All the action happens in the gutters anyway!

Whoops rereading the article I see you already cited the background motion lines. I will just add these two things that I think are important to showing actionn: (1) when people make a wide movement like a punch they usually put their weight on it, so in drawing it is better to extremize this and show people ina very umbalanced position. (2) perspective: it is better if the direction of the actions flows towards the reader or from the reader, to create a much stronger emotive impact. An action with a direction that is perpendicular to the reader's gaze is much clearer, but it also has much less impact.

I've used most of these at some point I think, apart from blur so maybe I'll give that a go. The most important thing for me is to get as much motion into the figures, objects and scenes themselves before adding motion effects. If you add these effects to a very static looking image it becomes a case of telling, not showing the reader what's going on. Something as simple as tilting a figure off their centre of balance can be enough to get that across.