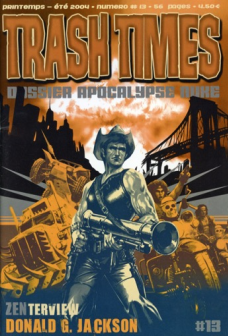 This is an article I’m writing after midnight while being drunk on mixed drinks of brännvin and julmust. It’s November. I need booze to cope with the Scandinavian winter gloom that hits your soul like a hammer this time of the year (It’s a thing up here). Not gonna lie, this is gonna be somewhat of a venting article. Somewhat of a post-mortem kick to the curb of that last article I wrote titled “Deep and Profound”, which I’m honestly embarrassed of ever having written – even if it did lead to some stimulating back and forth talk in the comment section which I’m very thankful for.

I think we’re all familiar with the concept of imposter syndrome. It’s something I’ve been struggling with for quite a while now.

It feels like it should be easy to sort out, yet for some reason the brain keeps getting things jumbled, making it hard to see that answer that is right under one’s nose. Here’s the thing. I really enjoy movies made by now long deceased film maker Donald G. Jackson, all which I watch on Youtube. Don G. - as I like to call him - is mostly known for the movie “Hell comes to Frogtown” (1988). Personally I prefer the sequel to that movie “Return to Frogtown” (1993). But another thing he’s less known about is a style and philosophy of film making called “Zen Film making”. A concept he and actor, martial artist and eastern philosopher Scott Shaw invented together.

This style/philosophy has been the heart in the production of movies like “Legend of the Roller Blade Seven” (1992) and “Guns of El Chupacrabra” (1997), the latter which have comic creator Kevin Eastman - co-creator of the TMNT franchise and a friend of Don G. - and his at the time wife pinup-model Julia Strain - who is probably most famous for being the live model of the character Julie in the Heavy Metal featured comic FAKK 2 - play minor roles.

The philosophy and concept of it is “don’t write it until you’ve lived it” which translates to movies - several of which Scott Shaw himself starred as the lead role of - being made completely without a script, where scenes and dialogue is allowed to flow out in an untethered fashion. Scott Shaw and Don G. both described it as a spiritual form of film making much according to eastern philosophies such as that of Tao- and -Zen buddhism and so forth, which – as I mentioned before – Scott Shaw was an active promoter of.

This concept would materialistically translate to movies that were very, very experimental in nature. Constantly toying with scene editing, cutting, transitioning and dialogue as of that of a high-school student film. Resulting in some very bewildering imagery and – dare I say – rather dreamlike sequences.

Now most movie critics – back then and today - would probably look at all this as being pretentious, as these movies were still very bawdy and very trashy in that typical B-movie spirit that Don G. was one of the imfamously, infatiguable contributors of along with the likes of Jim Wyanorski - the film maker behind movies like “Chopping Mall” (1986) and “The Lost Empire” (1984) among many, many others - or Len Kabasinski - who threw his hat into the independant movie making ring around the time Don G. passed away.

“The creation of a presumptuous, introverted mind”, “all self-glorified complete and utter nonsense”, those sort of takes. But me – well – I can’t but help buying into the artist’s intention here. Because it tickles my imagination. And let me be clear, a quite sizeable portion of my mind resides in the realm of imagination. It may be pretentious from an objective standpoint. But it isn’t from my standpoint. I can’t help but find it a spiritual experience of a sort, besides being really entertaining to watch. Maybe it is because I myself have a presumptuous, introverted mind. But I just can’t see it that way when I come back to watch “Legend of the Roller Blade Seven” or “Guns of El Chupacabra” again, and again, and again.

I might be an utter fool for experiencing it that way, but I’m having a good time doing so. And I’m thinking – yes, the intention of the artist absolutely matters – but the intention is not always gonna get through to all viewers anyhow, even when they try to make it comprehensible, I think. Maybe some things should be allowed to be esoterical, as un-democratic as that may sound. Not everything has to be for everyone, and rarely - if ever - is anyway. Maybe we should all just follow our muse wherever it takes us, and not worry about being called out as “pretentious” or any other kind of negative labeling.

I could definitely see, down the line, people calling some of my stories pretentious drivel. But as ridiculous as it may sound I do consider my storytelling a spiritual journey of a sort, because I am spiritually inclined in my own weird little way. And I shouldn’t be ashamed of that. No one should be. When I look back at that “Deep and Profound” article I feel like I was acting like one of those snobby critics who look down upon anyone who DARES to try aim higher then just cheer entertainment.

There’s nothing wrong with just doing stuff for cheer entertainment. But if you want to do something different, or something that does a little bit more then just simple entertainment alone, you should just do it. I have no delusions that I have something new - or “higher” - to bestow on anyone with what I do. I’m just having fun with my imagination and my beliefs. That is all.

And I think that was all that Don G. and Scott Shaw was doing with Zen Film making. They may very well have had some deeper self-realizations of their own and decided to just go nuts with it on film. Spirituality and philosophy both can be a game in of themselves. It can just be us wanting to play with our dreams and ideas the same way a cat likes to play with a ball of yarn.

All in good faith. All in good fun. Wether it comes off as pretentious or not, just go where your muse takes you and worry about it later.

So what are your thoughts, then? Have you ever had any of your creative works be called pretentious? Do you decide to flip that notion the bird and just go wherever your muse and your beliefs and ideas takes you?

Comments down below. And have fun going where only you can go.

@PaulEberhardt - Yes. I feel like that might have been at least partially the case with that last article I made. Partially that was me saying "don't HAMMER your message or intellect into my brain. please" which I do still think is a valid critque towards creators with a sort of "You were supposed to understand! I WILL MAKE YOU UNDERSTAND!!" kind of attitude out there in the wild. But I feel now that it was also me trying to beat modesty into my own brain, like an abusive parent telling their kid to stop playing with toys. And it is nothing more than self-deprication in the long run, though it can be grounding at first. Kind of like that Law of Jante code of conduct that has been hard-wired into Scandinavian society for a long time. @dragonsong12 - That is awesome. Surface level stories can be both liberating and fulfilling just the way they are. You keep doing you, man. You keep doing you👍

@marcarossi - I think that might just be the most comprehensible description of what pretentiounsess is that I've ever heard. And for that I thank you. I'm terrible at properly grasping semantics like these:P @bravo1102 - So basically wisdom is the gift of holding all knowledge together. The thing about wisdom though is that it recquires time and experience to grow and fully mature. I know I'm not even near that point. Which is why I have you people to turn to who might have it:) @hushicho - I saw the Vampirella movie a while back. Remember it being a good movie. I'm planning of getting into more of Wyanorski's works in due time. And yes. People may or may not think of one's works as genuine, but you the creator KNOW, in your heart, if it is genuine or not. And that is all you need to be satisfy yourself and be satisfied.

I made a very conscious choice a long time ago that I was much more interested in creating entertainment than Art. Not to knock Art at all, I think it's great and wonderful, I'm just aware that I'm not creative or thoughtful enough to pull it off and I'd rather enjoy creating and reading my own work than worry too much about the very things you mention in this article. In fact, until very recently I made it a point to not intentionally put anything of myself into anything I created (yeah, I know I still did so by accident because it can't be helped, but you know what I mean, heh). So no, no one has ever called anything I've made pretentious. My work is extremely surface level and I'm pretty okay with that. That said, while I do think "pretentious" is a valid criticism and thus can't be thrown out entirely, I also think it's over-used a bit and sincerity can sometimes get mistaken for it. Marcorossi's comment here actually sums it up pretty well. So I'll just point to that, haha!

There may be a thin line between being pretentious and just knowing your strengths, but self-deprecation as a form of false modesty is no better, albeit arguably safer than risking to come across as pretentious. As has been said here a number of times: be yourself and do what you love - that's what you know you do best.

I enjoyed some of Wynorski's and Corman's works, though those are works that may have been personal drives but were presented to a large audience. One of the things I admired the most about the Vampirella film I rewatched recently for the first time since its release was that it knew what it was and didn't try to overreach, or overstay its welcome. Whatever the level of pretension or guilelessness, we can still learn something from it if it connects to us on any level. I just say, satisfy yourself and let yourself be satisfied. If others are too, great. If not, it might not be for them.

Knowledge categorizes, wisdom unifies. That there are many is an illusion brought on by only relying on Knowledge. With wisdom it us known it is all one.

When we are at school, we have to read a lot of literature, either ancient or old or anyway not targeted to a teenager. In this situation it is normal that we are taught the idea that it is we who have to adapt to the texts, but then again it is school. When we read stuff for our own pleasure we can choose stuff that encounters our tastes, this is a different situation. When we write stuff, in part it has to be stuff that we believe in and therefore we like, but in part it has to be something that is understandable to other people, a third situation again. When you like a certain kind of movie you are in the second situation, it is irrelevant wheter other people like it or not; when you have to write stuff is the third situation so be careful not to sound obnoxious, but then if people feel that you believe in what you are doing it is a plus. The obnoxiousness IMHO happens when you try to sound deep because you think it will sell better, but in reality you don't believe in it.