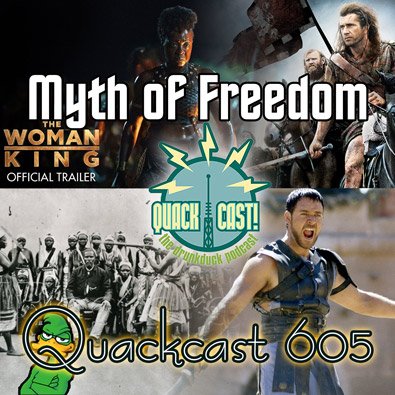 “Freedom” is the catch cry in so much historical fiction but it's usually an anachronistic piece of nationalist fantasy. You fought for your lord, for pay, your honour, your small region, etc, not for “Scotland” (i.e. Bravehert). Even today it's generally propaganda: e.g. The Invasion of Iraq being called “Operation Iraqi Freedom” and Russia's invasion of Ukraine being all about “freeing” the Russian speaking areas from “oppression”.

We alter historical stories to fit with contemporary ideas about ourselves and to give us some form of foundation for our prejudices, motivations and identity. Good examples are the Arthurian legends, Gladiator, Braveheart, The Patriot, Robin Hood, The stories about Christopher Columbus, and The 300

Controversy from the African community about the movie “Woman King” (we have not seen it) is a good recent example. It's about an all female fighting force in Africa in 1823 that fought European slavers, based on historical events. But the real historical tribe were actually slavers themselves. They didn't fight white slavers and “freedom” was never their goal. This very stark disconnect is interesting.
In other respects this film seems to be a much needed positive take on African identity, feminism, and the important and significant role of black women in history, if slightly “alternative” history in some respects, like Inglorious Basterds.

I can't comment more because I've not seen the film and do not know enough about the subject. I will link to people who do. Suffice to say that with historical tales we often reformat them in our own image in order to support our identity (see religion), Woman King is a good recent example, but it's not bad or unusual because of that.


This week Gunwallace has given us the theme to Forest Reckoning - Creepy atmospheric sounds fading in and out of the grey mists surrounding you. Are they the ghosts of lost children or are they the calls of tiny playful forest spirits as they dodge and tease and attempt to lure you deeper into the mysterious depths of the dark shadowy woods?

Woman King is Worth Watching: But Be Aware That its Take on History is Problematic, Dominique Somda, The Conversation - https://theconversation.com/woman-king-is-worth-watching-but-be-aware-that-its-take-on-history-is-problematic-191865

Thhat IS very interesting Paul. I love learning about that :) I suppose we really need to clarify that what we mean is strictly the modern idea of a "principal" of freedom (that like Bravo says comes from the enlightenment, i.e for all people, right to vote, freedom VS communism etc, basically our modern ideas of it pasted onto the past) rather than actual freedom from slaver for a person or freedom from a king etc.

Sorry for the history lesson. My point is just that in medieval and early modern times, freedom was indeed something people would fight and die for, even if it meant something quite different from what we think of as freedom today, something like "being free to follow someone else's rules". Since I did a lot of research on that for my comic, I know that these free cities had (from a modern point of view) a very restrictive society where neighbours constantly monitored each other, to the point of accusing someone of witchcraft if candlelight was spotted in his window too late at night. But these people were immensely proud to call themselves free and wear the appropriate hat of their trade, because out in the country practically no one could do either and was instead considered part of the inventory that came with the fief of some local lord.

The title of a "free city" (my home town Bremen still officially calls itself "Free Hanseatic City Bremen" out of pride in its tradition as a free city) meant being an autonomous city state that had to answer only to the emperor, who usually belonged to the Habsburgs and resided too far away in the South to matter. The city was ruled by a senate made up of the richest traders and master craftsmen had the right to mint coins, raise taxes, make some laws of their own and run a nightwatch. In practice, they coordinated their endeavours with the bishop who also had his residence in Bremen and owned a lot of the surrounding countryside. If any of this wasn't to your liking, you'd be displayed in a cage on the marketplace as a target to throw foul-smelling things at or you'd be banned from the city as an outlaw and every citizen of the empire had the right to do to you whatever they want. Btw. this is why today's Bremen is a two-town federal state and its parliament calls itself a "senate".

In the Holy Roman Empire, freedom meant "not being a serf", which could be achieved by successfully fleeing to a city, get an apprenticeship in a craft and enter its guild. The newly-fledged journeymen would then go wandering for three years to gain experience, hence the English term. This tradition is still kept alive today, even if it's getting rarer, but I've met journeymen who did that. Then as now you could tell they were free men, because they were allowed to wear hats (and you could tell their profession by their clothes). Travelling scholars were free men, too, also showing this by wearing hats. In old Europe, "freedom" generally had a lot to do with what you could wear in public without being punished as an impostor. As those free people were stuck to the line of work they chose and subject to some ruler or at least a town council, it has little to do with what us modern people would consider freedom. Personal freedom didn't necessarily play that much of a role either.

As Bravo says- it's fighting for your own personal freedom rather than "freedom" as we mean it. Many of the slaves from the ancient world would probably just dream of having a big household with their own slaves.

Eunus, a peculiar dude who did lead the first big slave revolt against Rome: https://en.wikipedia.org/wiki/Eunus

I recall that the definition of a slave, at least in Ancient Roman times, was literally "a talking tool". The owner could do pretty much anything to his slaves, including killing or maiming them, until some reforms that started somewhere in 2-3rd Century CE. A slave revolt in Rome, though, really wasn't about "abolishing slavery" or "freedom for everyone", it was mostly "stop being slaves and go home" for its participants, who were mostly captured foreigners. Although there was a huge debate over whether most slaves were foreigners in Classical Greece, in Rome they almost certainly were.

The definition of slavery was different. It was a form of service for food and board as opposed to salary with no freedom of movement. It was similar to serfdom except the serf was bound to the land and not an owner. The concept of the individual as an autonomous individual with inalienable rights was just outside of thought in premodern times. A slave revolt in Rome was fundamentally different from the American or French revolution. Braveheart has William Wallace talking like Patrick Henry using concepts that no one considered valid before the Renaissance and then maturing in the Enlightenment. That's the anachronism.

Also "freedom" is a word that became very loaded during the cold war, "freedom" in the west against "equality" in the east, but I would argue that freedom and equality can only exist together.

If we speak of classical antiquity, there have been many slave revolts that could be seen as fighting for freedom, like Spartacus, or a group of Ilotes who actually managed to revolt against Sparta. Spartacus himself was a popular figure in the 20th century but he is not very popular today, possibly because he is linked to soviet imagery; anyway he fought to be free but not to abolish slavery itself. The general idea in antiquity was, AKAIK, that slavery would always exist, so the point was to not be the one who is enslaved rather than the abolition of slavery proper.

I think the modern idea of personal freedom was invented during Classical Antiquity as something opposite of personal un-freedom - that is, slavery. A person can only be considered "free" if "unfree" people exist, otherwise the distinction is meaningless.

Transplanting the 19th and 20th century ideas of freedom into earlier eras is the problem. The actual concept still existed but had a different definition. Like someone would fight for the freedom of a lord or king from the tyranny of another but not the concept of individual liberty and not even a "nation" as anything more than an extension of a tribal identity. We speak Greek so we're all Greeks and therefore will not be ruled by Persians. Fight for freedom of our people not to be ruled by another, not some concept of the individual as a free agent with individual inalienable rights. That's 18th century Enlightenment thinking.