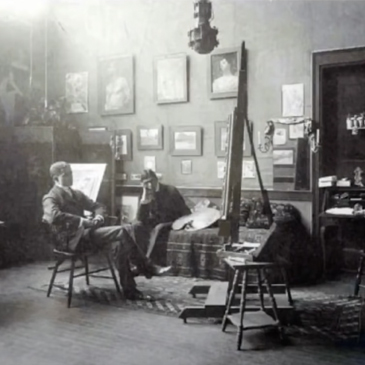 For the past month I have been taking a break to catch up on life. Between appointments, exams, social events and trying to catch up on the washing I’ve left about the apartment I have been mulling over something a psyche recently mentioned to me.

He said that I had a “perfectionistic streak in my personality.” which may sound admirable at first. Who doesn’t want to do the best job they possibly can? That’s what we’re supposed to want right? To aim for that one, shimmering moment where we do a thing and it is undoubtedly, inarguably, almost impossibly, perfect.

My mind had already began to whirring over his words the moment he had begun speaking before coming to a grinding halt as he added quickly, “Which, I think causes you a great deal of anxiety,”

I stared at him.

This wasn’t news to me. I knew this.

A few days later a comic friend of mine off-handedly mentioned that their ability to whip together pages upon pages of updates was, in large part, because they had embraced a “good enough” attitude. Since then I have been pondering this obsession with “perfectionism”. It is pervasive throughout the industry that constitutes my day job. You’d be hard pressed to find a job listing that didn’t have, “a high attention to detail,” near the top of the list. When paired with the expectation of near inhumanely speed at which work is required to be churned over, there leaves little time to be truly creative.

Given the rising and contentious commodification of webcomics, creators on bigger platforms such as Tapas and Webtoons are feeling the pressure to perform to the whims of an algorithm that is barely understood by those that run the site, the most impactful of all of these whimsies being time.

In a recent video by Kaz Rowe on JC Leyendecker, an American commercial illustrator who’s art went on to define a decades of America’s culture and style, she highlights a quote from the man himself which touches upon the need for stillness when cultivating creativity. This was in reference to his studies in Paris.

He is quoted as saying, “no lesson to be learned there is, it seems to me, of greater value and importance to the young American artist than the necessity of taking the time to dream over the work in hand. The American tendency is to rush at everything. Over here one learns to let artistic plans ripen and mature easily with much deliberation. This brings the freedom which comes only with a sense of leisure - a feeling which is very necessary to good art.”

This sense of leisure, of play, of flow, can become mired by perfection, particularly under the pressure of time. It can lead to procrastination, of putting off that comic idea you’ve been wanting to explore, or being afraid to pursue this hobby to begin with. This is further reinforced by platforms like Webtoon, where professional artists and now comic studios pump out title after title. This sets up the expectation that solo comic creators are not only expected to have a high standard of art but they also have to produce this quality under exhausting time constraints.

It’s any wonder why this model is ultimately shaking with fatigue.

So where does that leave us smaller creators? Where do we draw the line between perfection and good enough? And how much time should it take us?

”Over here one learns to let artistic plans ripen and mature easily with much deliberation. This brings the freedom which comes only with a sense of leisure - a feeling which is very necessary to good art.”

Enjoy the craft. Enjoy the connections this community can bring. Enjoy your characters, your story and the evolution of your art.

Do you struggle with perfectionism when it comes to creating comics or do you find it to be an escape? Let us know in the comment section below! And join us on Sunday evening for our Quackchat at 5:30PM(EST)!

When I was at University, I had a painting instructor who once told us "At some point you just have to finish the damn thing!" Hey, we're only allotted so much time on this planet. I had 2 boys. It was more important they go fishing with their dad than be ignored because he had to get that background "just right" on a webcomic nobody read.

Example of misusing perfectionism as a kind of meditation: https://www.theduckwebcomics.com/Master_the_Tiger/5566237/ I had been very stressed-out at the time (and that had nothing to do with trying to make something perfect, just with meeting deadlines and getting over with it), and relaxed by essentially drawing a carpet, just like Tibetan monks do with their mandalas. It's why my characters stay relatively simple, and to avoid making the whole single-panel gag look too eye-watering I again failed to include the gruesome 60s wallpaper I always mentally picture when I draw that living room. This is of course not a good way to draw pages if you want to keep a schedule, quite the opposite, but that wasn't my point. I just exploited my perfectionist streak as an excuse to wind down. I think I'll do that again. It just occurred to me - seeing that I'm at a point when I'd be happy to produce any update at all - that this may be just the thing that could get me back in the saddle.

"Perfect is the enemy of good" as the saying goes. I keep telling myself this all the time, but perfectionism is a habit that's hard to break. Unsurprisingly so, as it's really a character trait. Curiously, I manage the "good enough" well enough most of the time. In my job it's vital to do that, but that's also exactly why I don't mind indulging in perfectionism in my free time. It's fun to use creative stuff as an outlet for perfectionism as long as I stay in charge and keep it within healthy amounts - and as others have said before, having fun is the point of doing this. So instead of denying my perfectionist side I try and find ways to work with it. In my comic episodes I tend to consciously designate one or two panels as an outlet for my perfectionist side, usually establishing shots where an almost confusingly high level of details may look cool, even if it's not strictly necessary, and apply more or less strict prioritising in the others just to get on with it already.

And by "don't think big, think rationally" I mean "don't focus on what makes your setting impressive, but what makes it all work". You do that and the impressive parts will come by themself (as Bravo pointed out)👍

Great Post! Like bravo1102 I think learning to prioritise can save time, but also make for better comics. I have a tendency to get lost in unnecessary detail, but those pages would've been better if I'd simplified all of that. They would be easier to read and also quicker to make. Sadly it takes time to learn of to do that well, so people use other shortcuts that sometimes make things worse. There's a lot to be said for just getting it out there any way you can though.

Most people think attention to detail is obsessing over every element of everything when in fact it's setting priorities. It's about knowing what's important to pay attention to and what can take care of itself. Often that means planning. Setting up a status quo of how something will proceed so you only have to pay attention to the unexpected. Like grass is green. So that white thing doesn't belong. That's how attention to detail is taught. Seeing what is out of place and that deserves your attention not obsessing about every tiny thing in there. You have a standard, you meet that standard of "good enough" (which will often impress others as excellent) and focus on how all the parts make the whole and do it. Make it happen. A lot of times the details fill themselves in because you have a standard and good work habits. So when something stands out you can deal with it just like that how you can spot that white cigarette butt in the middle of the lawn where everyone else sees nothing

Yep yep, you're making a webcomic, not hanging a painting in the Louvre. Do your best but don't stress over it, it's supposed to be fun.