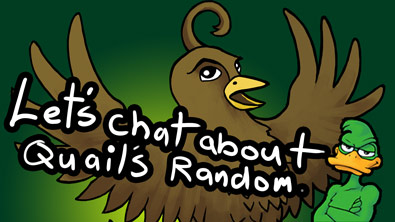 No significant update news for the site design this week so instead let's take the opportunity to talk about Quail's Random.

It's a feature on the site that's appreciated by some, hated by others, and probably ignored by many. It's a list of ten totally randomly picked DD webcomics that sits on the front page in-between the Top Ten and the Recently Updated lists. Unlike the other two lists the comics it displays have zero criteria, they don't have to be popular or recent, it's a random list with no order or reason. Comics on it might only have one page, they might have finished updating 12 years ago, they might be a horrible mess of copy-pasted gunge, you really never know what you'll get


Why is it hated?
That's easy: it takes up extremely valuable real-estate on the front page with a list of comics that are mostly essentially dead. Promotional space on the front page of the site is at a huge premium and it's not great to use so much of it up on comics that will never update again and creators that aren't there to care about the readers. It can give the impression to new viewers to the site that we're just full of old, dead comics, failed projects, and things that just don't go anywhere.
Which is why it needs to go.


Why it's appreciated
Quail's Random doesn't just throw up dead-end 4 page MS Paint comics from 2006, it serves up a whole bunch of hidden gems that there is really no other way to locate on the site aside from a targeted search- but if you don't know about something you can't search it out, which is why Quail's Random can be so valuable. It works like a kind of magic archeological retrieval system, Indiana Jonesing these lost gems back into the light of day!
Which is why we still need it.


So what do we do about Quail's Random?
I have two ideas:

1: Replace it with a single comic result instead of a list of ten (so it takes up less room), and have it somewhat limited in scope, so that the comics it displays have to have (for example) at least 10 pages- plus any other criteria people can think off.

2: Move it to the Search page (ie “Comics” link on the front page), so that when you go there there's a list of ten randomly picked comics at the top of the page. And we could still limit it to showing comics with at least 5 to 10 pages.


Those are my thoughts. The current redesign doesn't include Quail's Random because most people didn't want it there anymore and on balance I agreed with that, but I can still see the need of it, especially since people like HPKomic and Lothar pointed out that it does have a use, What do you think?

I love all these suggestions! :) For crafty stuff like collapsible bars we'll have to see, I don't know if people would understand to use it like that or if Alexey could code that. I'm still leaning to the idea of 10 random comics showing up at the top of the "comics" (ie "search) page. There could be a "random" button next to the search button there that would then display a page full of totally random comics and all the search modifiers could be used on it just like a normal search- we will ad modifiers for page numbers, dates, likes, popularity, rating and whatever else you can think of. And there won't be a criteria for number of pages or whatever for the display of the randoms because people don't want that it seems haha! You can do that yourself via modifiers.

Any chance that Quail's Random could live in a collapsible bar? It could default to closed but be revealed with a click.

Facts about the randomness of Quails Random. After a long while, the “like” goes to ZERO when it has not been updated a while. When you look at some good comic from yesteryear, the comments are a lot but it has zero likes. Second fact: all comics on the site are randomly displayed. Old and new. With that being said, if you are logged in, none of your personal comics shows up when you refresh the home page and even by category as far as I know. I like the random feature on the homepage but I think it should be up to 3 random comics at a time. I also would like it at the top ten search area as well. Feature small amounts on home page and more on the search page.

I use it more than any other part of the site. Sometimes I just keep refreshing the page to see what pops up. I don't think there should be any limit on how old there comic is or how many pages it has. That would suck. The best part is finding all the false starts of just a title page or 3 pages and then eternal haiatus. It's exciting, sometimes depressing, often irritating, and occasionally hilarious. It's like a slot machine of gotchapon balls where most are empty or have only a few pieces. But once in a while you get a turd or a solid gold fidget spinner.

I really like the idea of being able to just have eyes on random comics. If a list of ten is too much, how about a "Random Comic" button, a la TV Tropes' "Random Trope" button?

Quail's Random aside, I'm curious as to how, exactly, does the Top 10 work? The reason I ask is because I notice while the comics in that list do tend to be consistent, they also fluctuate quite often, like one comic may be in the #1 spot one day, then drop down to #7 the next, then maybe #3 the next. I assumed it was based on number of likes, but I've seen where comics lower on the list may have more likes than comics higher on the list. Again, I'm just curious as to what the rankings are based on. Traffic? Subs/faves? But otherwise, the comics I've discovered worth follwowing through Quail's Random have been very few and far between, because yeah, most of them that I've clicked on have had maybe only 2 pages, or haven't been updated in over a decade. I'd vote to make it a search page feature.

Quail's Random has to be somewhere, just not on the front page where it really does create the wrong impression. I'd make it part of the search function but in turn make the search function more prominent. The idea of showing one random comic thumbnail on the front page could be modified by coupling it with a button like "discover what other amazing stuff we got", leading to an extended search (pop-up?) page where good old Quail's random is the fixed top part, stubbornly presenting whatever it coughs up. There would be room to show almost any number of random comics without impairing the functionality of anything - although I wouldn't suggest more than a dozen so as to make it not to overwhelming. Part of this new QR could be a "refresh" button and some sliders (or whatever they're called) to quickly adjust age and page limits if you want to. The underlying motive here is to invite users to toy around with it, making it a slightly addictive "dig up the hidden gem" game.

What dpat57 said. If it stays on the front page, the most I'd change would be a thumbnail requirement, but otherwise, if it gets relocated in the search menu, it will get far less exposure so it's only fair to make it a screenful of random. I think it's one of the best features, people get views even if they aren't active all the time and aren't trending and they can't complain about which comics show. (Also, multiple choice would be dandy for when specifying a comic's genre, because it might fit into various genres, but that's another thing.)

I both love/hated QR, but had to vouch for removal on grounds of its negatives outweighing the positives. I have said before it should be a function of the search option (and search experience needs to be improved but that's another matter for another time) maybe make something fun with it by having a visible button for the Quail Randomizer that generates the results? It should be entirely unlimited, part of the fun is seeing what's in the bottom of the toybox! When it's a feature on its own, there should be no need to bar anything because someone generating random selections should expect dead comics already. I think what people liked about it being on main page was it was a random selection without them having to do anything. If we had personal portals back though...

And I almost never look at Quail's and instead scroll through the just updated comics. I'm not much into webcomic necrophiloa. Has been kind of neat seeing several of dpat57 comics appear at the same time.

I agree with Banes. A time limit would take away that magical sense of time travel, or the feeling of being on an archaeological dig with the excitement of not knowing exactly what might turn up.

I've never minded it the way it is - but a link to the Quail's Randoms is okay. Hard disagree on putting any limit on the age of the comic, though. A hidden gem could be 12 years old and 5 pages long and still be something I'd want to see.

I clicked on all the quail's randoms on my page and all but two had 0 likes, so even a requirement of 1 like would block most comics. Is it possible that very old comics didn't have likes, or said likes got dispersed in the cyberspace?

One idea would be to limit it to stuff that A) hasn't updated in the last year and B) has some minimum requirement of, say, 5 pages, at least 2 like (this might be too rigid? or not?), and at least a thumbnail. So that the minimum one year hiatus makes it useless to game the system and the other minimum requirements make it so that there is at least a minimum of stuff to read.

Some gems are there to be sure. It does become a disappointment when the comic hasn't updated in years. Perhaps, a five page limit and a three or so year limit on how long ago it updated. I sometimes reach out to the authors of those long dormant stories. Mostly, they don't respond. Off to bigger and better things I suppose.

i take a glance at the random comics quite frequently, even the low effort garbage. its like a time capsule full of crispy pixels and questionable humor. i wouldnt mind a page requirement tho, like even just a minimum of 2 or 3 pages to filter out essentially empty entries

I look at comics on the random strip all the time, I think it's a value add, I'd want it *somewhere.* If I have to click on a menu option to see them, then why stop at 10 ? Gimme a screenful.

There are some worthwhile things on here that have even less than five pages, such as the amazing MSPaint Slice of Life Comedy Webcomic Communist Horse Party, but it's annoying when a lot of them don't even have a thumbnail. Moving the whole thing off the front page as in option 2 would make for a better shop window I think.