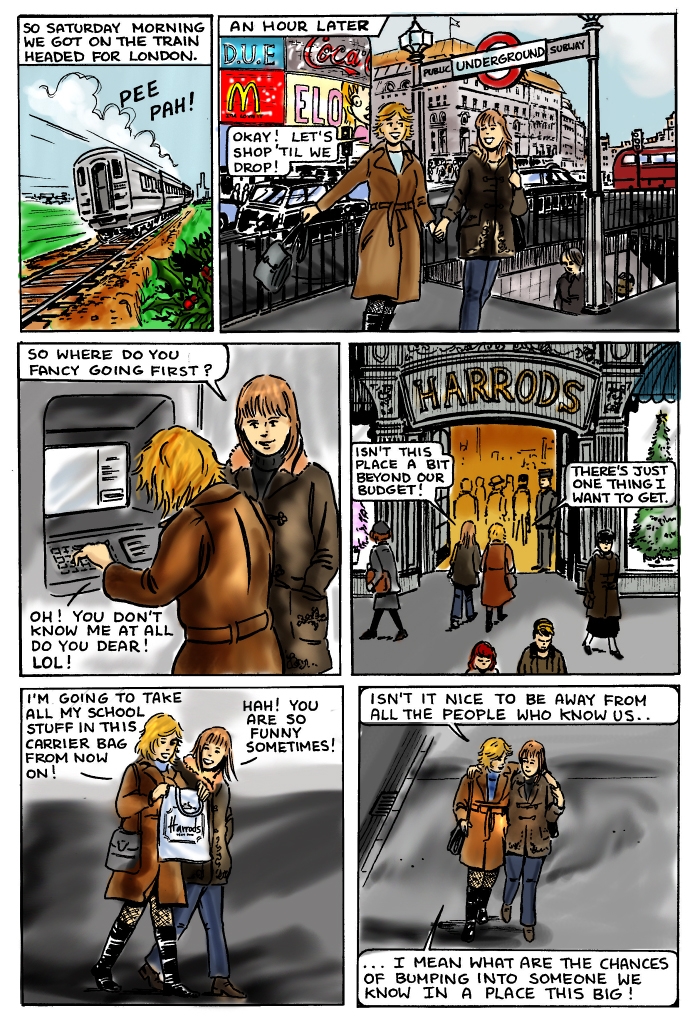 has anyone seen Sky?

I haven't talked to her for a while has anyone else? *looks around lost and sad*

My internet was cut off for three days so I couldn't get the coloured page to her. *sniff*

Now WHY do I get the feeling they'll bump into someone they know? ;)

Haha I liked that sound effect for the train... PEE PAH!

Uh-oh, that sounds like a set-up for bumping into someone they know...

I love this, its drawn so well! I love the second panel with all the stores in the background I feel afraid for them though!! I think someone will appear

That's how I felt this week.... But it did :P Very nice drawing of London. Of course, I've never been, but from pictures I've seen it looks great :D I hope the impending doom isn't too terrible...

"It can't possibly get any worse" "At least it's not raining" ...does she not watch TV or read comics?! She is begging fate to screw them!

You know, now that they have spoken [i]this[/i] particular line, I think the answer is "good enough".

I SEE AN ELO BANNER ON THE BUILDING!! COOL!

Hi Guys, Thanks for all these lovely comments:) And Em has made a wonderful job on this page as always! Sorry the page was late, just so many probs lately. The previous page is up in colour too now if Clomle or any of you want too see Janey straddling Sarah in full colour! lol

I got a bad feeling about this...

Ok, you just KNOW that was the wrong thing to say don't you. I mean, hello, chancing fate a little. Besides, you're holding hands so you don't get lost. Yeah... that's right. Like little kids do. It's a hangover from kindergarten and if they argue with you about it, throw your juice box at them and chuck a tantrum.

dreaded phrase that makes it likely somethings gonna go wrong " what are the chances?"

Wow! Are you British? You've really drawn London well! That's the Leister Square I know and love. I'm completely impressed. I also rate you for the Harrods reference. And the beautiful art and colouring, of course!

Also like the holly bush. Nice Xmas touch. And I do believe Harrods was in 13 Little Blue Envelopes...wasn't it?

You never know people. In the last Yume pages I thought Fiona was going to find ia cheating on her at prom. Nope. Love how you put McDonald's in there. XD McDonalds...we're EV-ERY-WHERE!

I say it's dawn! She's been suspicious since the beginning!

They're so busted! Great page! -L.

This is just a guess, but I think she just jinxed it.

It's a pretty page indeed! Love the drawing and coloring. And you got us a master cliffhanger... I'm excited to see the next page!

Awesome page! And awesome use of impending doom!