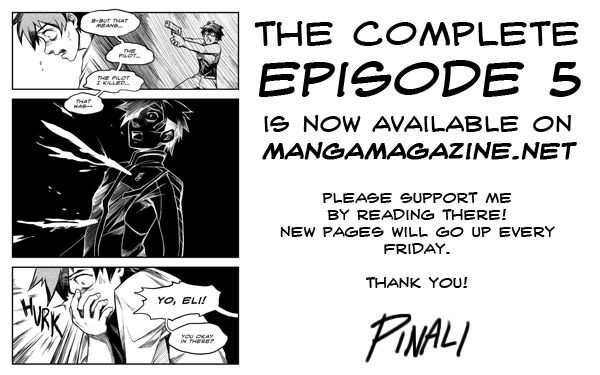 Aaand off we go.

Click here to read Alter on Manga Magazine!
I apologise for the delay, the Manga Magazine site took longer than expected to launch their new system (including this comic) and I took the opportunity to take a bit of a breather from this.
I'm going through a lot of personal things right now and I feel like it's entirely possible I do not want to work on Alter full time, or even for a large amount of time every week. I'm dropping updates to one page a week, only on Manga Magazine, until I figure out what I want to do. If I have enough hits/readers over there then it's possible I can get paid to draw it, at which point I won't have to worry about spending a lot of time on it, hence me encouraging people to read there.
Thanks for following!

well, it seems alter fell into the "permanent hiatus" hole

ah, too bad then. also i noticed it doesn't seem to have a comment function

It'll start being updated here again in about 8 updates/weeks time. The other site will have a 12 page lead to encourage people to read there if they're interested. And I'm not sure if there's a way to do that. The chapters are all separate, it doesn't work like a normal webcomic site where you get the current page when you click it.

say....how do i work this sit so i get to read the current page at all times?

so the other site is up and running. i forgot but....the comic here will stop being updated?

I'm okay with it being just work as long as I get paid. It's hard to get paid drawing only what you love to draw, so why not settle for drawing other things in the meantime? You're still drawing, which improves your skill and it's far better than working retail. I have lots of other stuff I can draw for fun the rest of the time. ;) And I wouldn't be doing it "day in day out" either.

very few comic artists/writers make money at it.. its hard to keep doing it day in day out if making money is the only reason to do it.. .. you have to love something about it.. love the story... the characters ..fill some need ...or its just work......