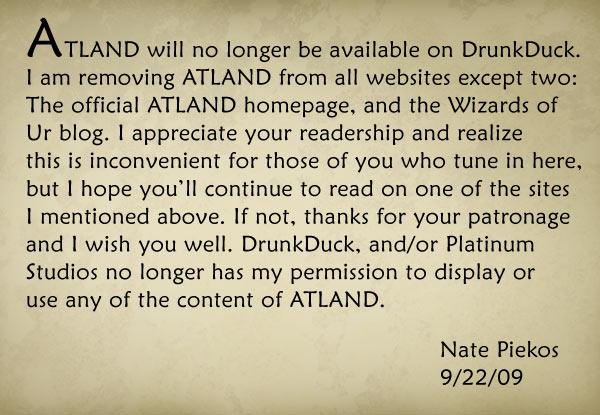 Why doesn't Drunk Duck have your permission anymore?

He-he-he-he...the can only be one. One down several thousands to go....

Drunk Duck is becoming a weigh station for wannabe's much the way Elfwood evolved. In the beginning when I started there, there was tons of huge artists who were breaking into the industry and then Elfwood became over run with the 2bit artists. True, there is a place for everyone but pro's want to hang with pro's. So, most if not all of them went to Deviant. Same can be said of the evolution of Drunk duck... the pro's are leaving and this is becoming a haven for the wannabe's. Like I said, there has to be a place for even the beginners and it happens to be this place. That is something DD needs to assess and accept or do something about it. Good luck Nate.

I know why. Atland is one of big traffic bringers on this site and they probably don't want to share a pinch of the big advertising loot their getting here. I think DD's page rank has dropped down. Oh yeah I should have told you before but I did a comic book review of you comic on my blog "I Am Legend". It's a couple weeks old but you did pretty well. check it out.

I have several reasons. Platinum knows what the main reason is. But I'm not discussing it. Thanks. Stop by the Atland site for fresh updates: realmofatland.com Thx ~N

Was it something that Platinum/Drunk Duck did?

But what is the reason for this?

Damn, is Platinum Studios pi**ing off ALL of their most talented artists? This is crazy! D.J. Coffman's gone- and now this? I can't take much more of this.....jeez.

THIS IS VERY DAMN BAD & NOT GOOD ANYMORE! WHY DO YA GO, HUH?

does that mean its not on blambot anymore either?

Sorry to hear it, but I totally understand.

This is sad news. Farewell my friend Drunk Duck will be less without [b]Atland[/b]. My 2 Cents.

Google is usually handy for such things. Looks like you can find Atland at http://www.realmofatland.com/

sorry to see you go Nate

what toughy said, how about some links?

How about some links?

Guess I just got a new bookmark.