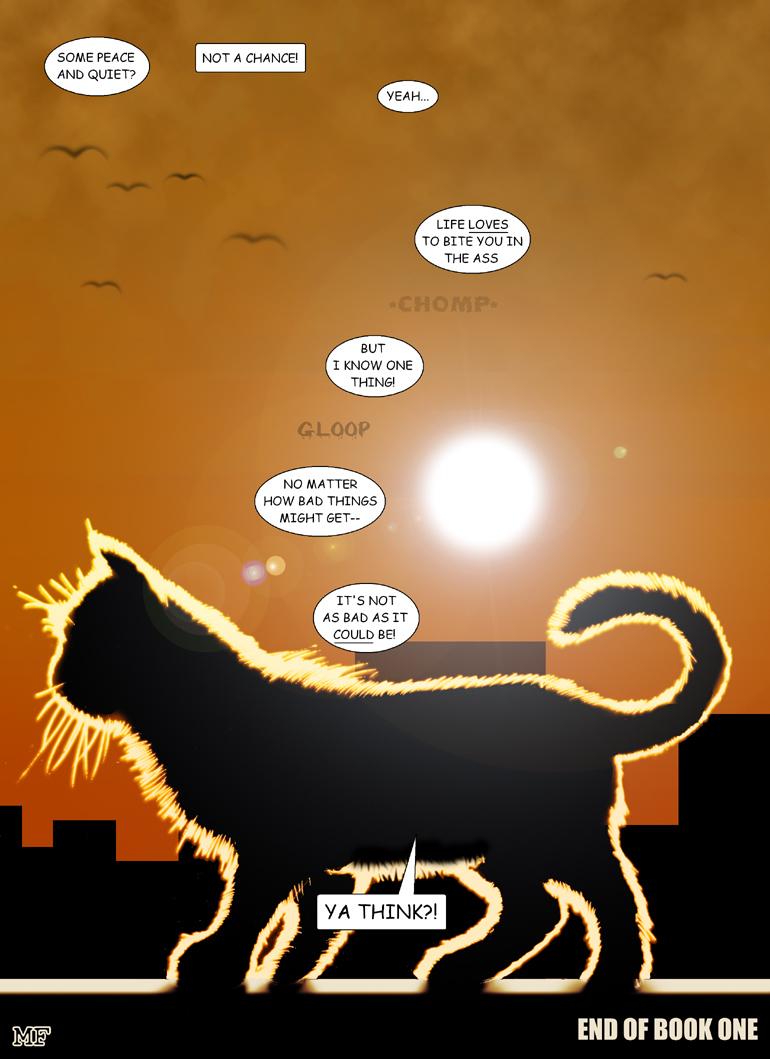 And thus ends BOOK ONE - and your favorite comic (well duh!) officially goes on HIATUS.

Why does it end? And why right now? There's plenty of stories you could squeeze out of the concept of a mouse in love with a girl. And there in fact was. What you've read so far isn't even half of what I was planning for. But then there's this treacherous, vile thing called LIFE ;) In a nut-shell… Erica, the real-life version of America, is no longer involved in making the comic. We've grown apart - to the point where we could no longer be friends. So for the past seven months or so I've been trying to wrap this story arc up :P Took a while because I didn't want it to feel rushed. Plus, I liked the dark fairytale part way too much to just abandon it :D So, while I wanted to end the story, I had a great time writing and drawing it.

Why the hiatus, then? Most importantly - I need a break. I've been working on the comic for the past year and a half, and I spent most of my weekends - Saturdays and Sundays, dawn till latenight hours - drawing. I've neglected other hobbies. I haven't read more than a few books. Basically stopped working out. Haven't written a new story in almost two years. So I need some time off to do that. And I need to work out a way how I can do all of those things AND the comic simultaneously and not drop dead. So basically I need to slow down. What does that mean for A Bit Cheesy? A hiatus for now. Changes in the future. I need to figure out where the story goes from here. I have a bunch of ideas - but I need to make it something as… relevant as the “Mouse in Love” arc. Something BIG. And funny! Plus, I want to improve as an artist - so I'm going to practice my pencil and inking skills. Anatomy, possibly perspective and all those things that all serious cartoonists know and I suck at. Also, I want to get myself a tablet. So heck only knows what the comic will look like when I get back to it :)

And another reason for a break is that… No, I won't tell you now :P But watch this space, I'll let you know in due time :)

But before I go, let me ramble for a minute about today's page… It's a result of one-man three-day-long brainstorm. The whole chapter grew expotentially, and every time I was nearing the end, I got another idea extending it by another couple of pages. So for the past few weeks, I had this one idea about how the chapter should end in its current form. But when I finished the last page… the brainstorm started. Since it's the last page of Book One, I wanted the page to be something pretty - and something different at the same time. So as I thought and thought and THOUGHT, I ended up coming with about twelve different ideas - all of which I liked for different reasons. And disliked for different reasons, too. So I'd write pros and cons of each - and ended up unable to pick just one :P I had several favorites - all of which had something too precious for me to leave out. Fake blood. Breaking the fourth wall. A cameo by Garfield, even! So yesterday, I gave up. Today, I woke up utterly frustrated and grumpy. And then, as I was having my breakfast - BAM! An epiphany! All pros, no cons :) AND it has a nice, epic air to it, doesn't it? A cloudy sky at dusk, a backlit figure… Birds flying away in the distance… Makes you sad and yet mellow at the same time. That's what I always loved about writing books - and what I haven't felt in a while.

Thanks for sticking around and stopping by every time I updated :) Keep your eyes open, soon enough I'll spill some beans about another thing I've been working on! Meanwhile… shhhhh :)

I liked this strip. The design was unique

Dawn: Haha I know myself well enough to know ABC will be back sooner than I think ;) That, or I'll end up multitasking between 5 other things - working harder than ever before :) As for muses... No worries, I already have a bunch lined up :) The next story arc will be a bit of a breather from love woes - but can ya really escape from love? ;) So yeah, I have a new muse - who's already nagging: when will the story including me start? LOL! Ghostrunner: Good, good :)

I think you deserve a nice hiatus, you're a very hard-working artist. When inspiration hits you and you can't help but continue with ABC, I know I'll see you right back here ;0) Always sucks when your muse gets away... maybe you'll find another one that'll help you finish this masterpiece!

RoyceMarie: You know, I will miss it, too! As much as I need some rest, I can't help but imagine new adventures of the mice. Possibly even a new look of the comic or the characters. And even if I don't begin working on the new pages very soon, I'll still practice my skills - and if it's anything worthy, I'll be sure to post it :) Bocaj: "Product"... That's a very good word for what I'll be working on :) Tantz: I figured the continuity sort of demanded that the cat eat the mice - because you can't leave a cliffhanger ("Will the cat eat them?") when you go on an indefinite hiatus - but then again, they have to live for the sake of Book Two. That's why I like this ending a lot, myself :) Abt: Positive :) I have a yet better ending for the whole comic in my head. Which I came up with a long, long time ago, a year or so. And stop complaining. Ok, so there are no boobies on this page - but there is a pussy! ;)

That IS a great ending... you sure you wanna continue someday? ;-) Now, my only gripe is - no boobies here.

That is SUCH A GREAT final page! Both grim humour and an ignominious end for our mouse. But I guess it could be worse in that they could be dead in there. Heh heh! Excellent stuff, can't wait for your next dabble in art- written too! I'd love to read something of yours. Be well!

Well, I'm looking forward to your next product!

I will miss your art and quirky story. But burn out is a terrible thing. And not reading many books is just wrong. Enjoy your rest and have some fun. Blessings and Peace. P.S. I like the ending, which doesn't say much for my love of mice. You are always a 5.