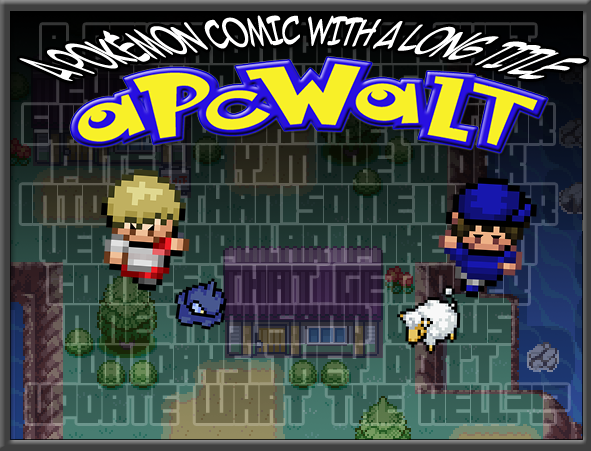 me on original Cover
Yay I made a cover! Full-length name wouldn't fit with room for them ppls, so I just use the long name thing :D
I'll move this back next time I update, which may be sometime tomorow :D

*GASP* You might want to change "name" to "title"

k, and nvm bout reading this cuz its too far along and i dont have the will power

so am i the only one that has noticed that its says ebil not evil? v and b are next to each other so i understand the typo. im gonna start reading this today!

Hoo boy. "the author puts way more work into it than some other very popular PoKeMoN comics" Yep. I can tell because it looks like every other pokemon sprite comic.

I just love it when you guys make long titles.

Yeah, this shit deserves a 2.

He's got a point, UNLESS HE USED KEVON CLIFFORD'S ACCOUNT AND A PROXY OH JESUS.

See alex? I dont give ones unless its horrible This shit deserves a 2.

The anon keeps posting meaningless comments on both ur pages... newayz FAVED!

You're right, we are going to say hateful things to Mr. Anon there. @anon: NO ONE SAID YOU HAD TO READ THE COMIC SO GO AWAY SPINELESS RAT. ...great page :D!

... Um ok? People are gonna say hatefull things about you now, though, I couldn't care less.

I love this comic. Make moar.