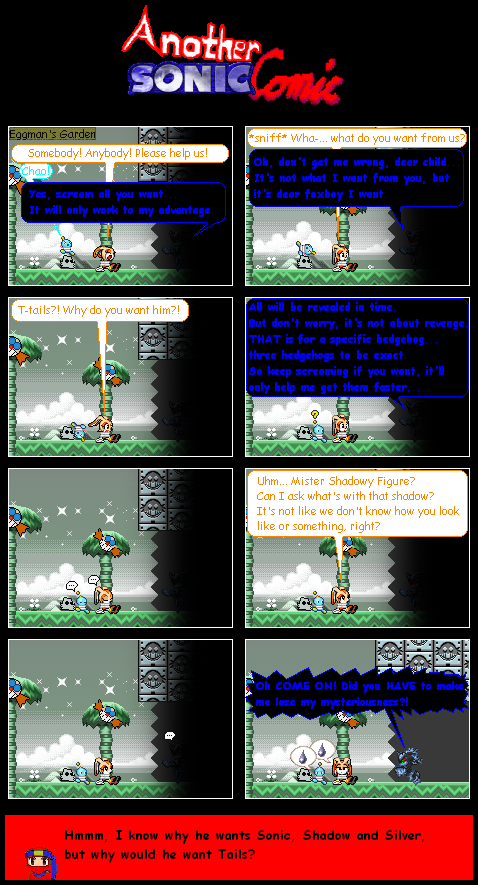 Ok, Lot's of people were worried I stopped with Another Sonic Comic, this update will show I'm still continuing the comics along with Sonic College. So don't worry, Another Sonic Comic will NOT just fall down because of another Sonic comic (pun intended) Also I'm continuing to work on the flash version too. Thank you for your support, I appreciate it!

XNinjaRed, You said it's not gonna be updated until Sonic College was done... BUT THAT HASN'T BEEN UPDATED SINCE 2 YEARS EITHER!!! That's not fair, out of 8 REALLY good comics only 2 didn't completely die off... :(

wow i remember reading this comic 5 years ago and its still isnt updated? wow

WHAT THE HECK IS ALL THE ARGUING ABOUT?! IT'S A FRICKIN GOOD COMIC AND SO IS SONIC COLLEGE! THEY ARE BOTH GOOD, AND HE CAN UPDATE THEM AS SOON AS HE WANTS OR I'M GOING TO KILL HIM!

Oh, my GOD!!! "Another Sonic Comic" you're dead, how could this have happened to you?!?! You had so much to live for! Now all your readers have a little piece of them taken away... Oh, god why?!

MAN I WANT TO NO WAT IS GOING TO HAPPEN

It will be revived, AFTER Sonic College is done.

This comic is dead

http://www.drunkduck.com/The_sonic_team_show/index.php?p=307454 ^ Look at that interview, it will partially answer your question.

when are you gonna update?

There's not gonna be an update for this comic for a LONG time. This comic will continue by the time Sonic College will end. You will know why I'm doing this when Sonic College ends ;)

might i ask when the next update will be

guys! think of tails' expertise he might want tails to make some sort of machine to destroy them...something like that