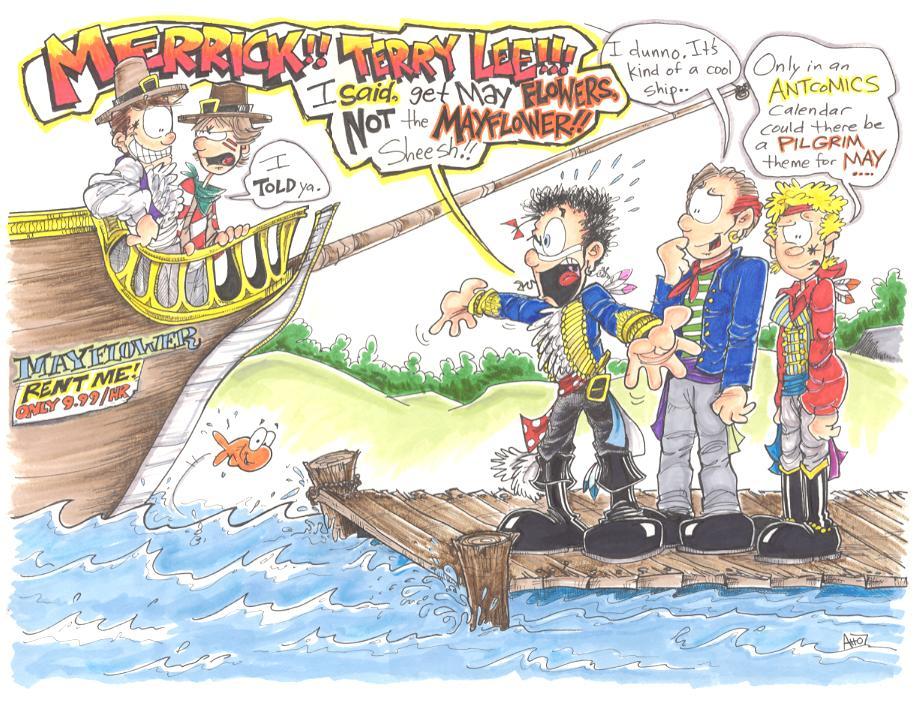 The May installment for the 2008 Antcomics calendar!

So I wanted to do a Thanksgiving comic…here's the deal though: I still had seven more Antcomics Calendar pages to draw. I need to be finished with these by Christmas time. Yeah. I was realizing it's the middle of November…

So the May page was next. And I found a way to do both! HAHA!

This was inspired by a dorky joke I heard as a kid (and not surprisingly, I was a sucker for bad jokes):

Q: If April showers bring May FLowers, what do May Flowers bring?
A: PILGRIMS!

Anyhow. Here it is, and as I drew this it occurred to me that it was the perfect opportunity for a cameo. You all probably figured it out by now. Dracco is a swell guy, he always leaves nice comments here, and he has one of the kick-assest comics here at DD.

In all honesty I will be gald when I can go back to regular strips. The calendar is fun, but I have so many other ideas it's a little frustrating in a way…if only I could draw FASTAHHH!

Oh, and as promised–there is a killer 50th strip (fast approaching) that will be a big Fanart Extravaganzaaaa. Stay tuned!

Hey! Gupi!!! Thanks a lot, Amy, for having the fishie visiting your strip! I guess he's coming for an autograph from the Ants... or from you? ;-)

Shoo the pilgrims away and have a nice holiday out in the open sea, I say! That's a mighty fine ship right there, I see no reason to complain! But one thing makes me wonder... I don't recall seeing girls in this comic... Hmm...

Is that a Plymouth rock in the background?

I love this one! So well done!

I heard that same joke too! *it's everywhere, I tell ya!* That's really great stuff. I know how it is to want to draw faster--I think the same thing to myself all the time! :D *lol* I was considering building a time machine so that I could give myself the advantage of using time to the fullest extent. (If only.) :(

Always a great page. Can't wait to see the extravaganza!

That's cute xD I so want this calendar when it's done!

yay fishy! Nice cameo ;0) Cool way to kill 2 birds with 1 stone, too. Some months must be hard to come up with artwork for. Unless it's just random. oo! oo! fan art extravaganza??? sweeeeet!

The shout out to Like Fish In Water was noticed*

yeah. The shout out to Like Fish In Water and I'm looking forward to some regular ANTCOMICS strips as well. keep up the awesome work. -J.