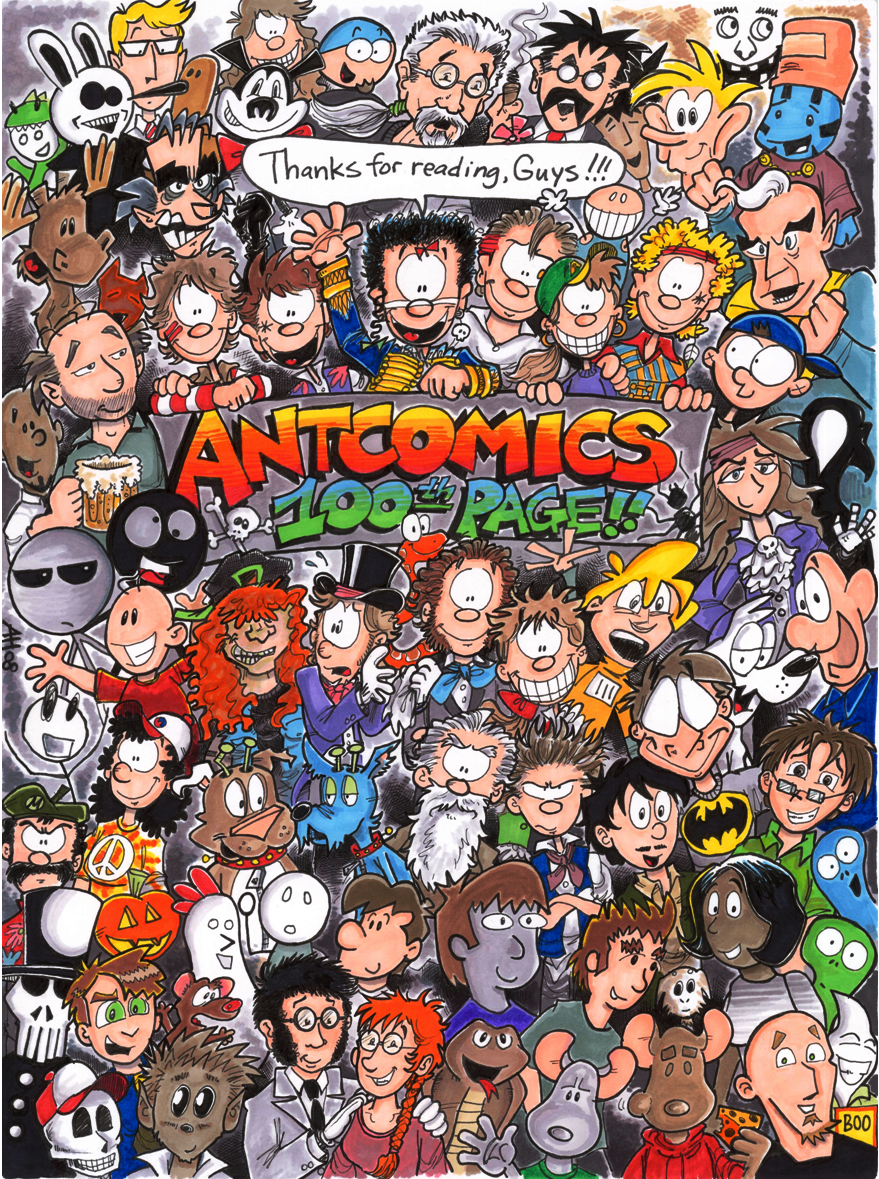 And here it is, the finished product!

The Ants wish to thank all of you guys who read regularly and take the time to post comments! You guys rawk! You are the main reason I keep going with these!

For a guide to who all the characters are, click here:
http://hankinstein.deviantart.com/art/Guide-to-Antcomics-100th-Page-92761513

Yeah, it's a day early. I finished it quicker than I had anticipated. And I couldn't wait to put it up. :)

Oh wow! Congratulations on become a centenarian! This page must have taken you ages, but it's amazing!! And thanks for popping the boys in there, they send their love, hugs and paper bags full of dysentery. :)

Amazing! That looks really great ^.^ I love seeing all these wonderful people that I recognize - and your style in general is just lovely. I'm such a punk for not reading your stories ^.^

Oh man, congratulations on 100 pages, duder! I am absolutely ticked pink by the Bruised Oranges cameos -- Arthur looks like a total sweetheart. Thank you so much! ;A;/ &hearts; &hearts; &hearts;

Fantastic page, congrats on your hundreth :)

This is so fantastic

WOOOOO HOOOOOOO iM SOOOOOOO HAPPY FOR YOU,i FEEL YOUR JOY,SORRY IM LATE FOR THE PARTY,BETTER LATE THAN NEVER.I LOVE THE PAGE IT WOULD MAKE A GREAT T-SHIRT AND YES IM YELLING.

Congratulations on 100 and thanks so much for Mick's cameo! He likes all the face time he can get :)

CONGRATS on the hundy! Thanks for the awesome cameo... makes me wanna sing "Word up!"

Amazing! Each time I look at it, I find another character I know.

Ahhh hahaha! No Brett or Darrell but there's Moon! This rocks! Congratulations!

Aw shucks Steely, you coulda taken the five! ^-^ Man, that is just AMAZING!!! (0_o) It was impressive in black and white--but it's absolutely STUNNING in color!!! *is still marveling at how you managed to fit in 72 different characters* It's just too HUGE TO COMPREHEND! *,* (mind was blown.)

that is one epic collage of GREATNESS! yay for triple digits. -J.

Oh and congrats, of course! Here's to many hundreds more! And like someone before me, I'll say you draw my characters better than I do :)

Yay! My mice are there, too :D Last but not least! ;) And You alllmost got the clothes' colors right this time - Mick's t-shirt is yellow, not green. Althoooough I've been wondering about "upgrading" the image of both and Mick WAS in fact going to get a green one.

Very cool, kind of fun seeing some black and white characters in color.