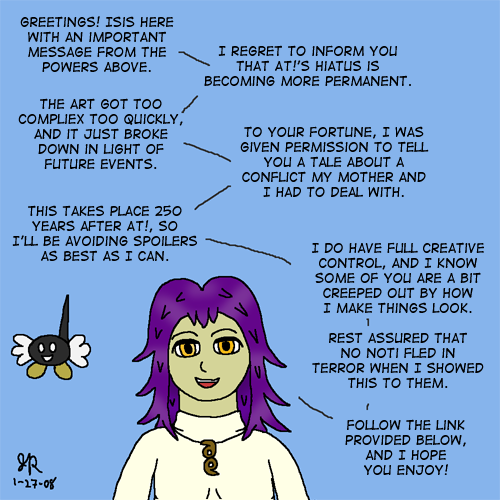 Isis gave the gist of it up there. One comic falls, and another rises all phoenix-like. This new comic is called Crossing Death (link) and takes place on Lunis's sister world, Ther'ran where Aeren and family normally reside. However, the focus of this comic is not on any of the divine characters, though they still play an integral role. The important part is that the comic is more strip-like and in a style that resembles Isis's but without the added creepiness. I may return to AT! at some point, but Crossing Death should keep you entertained in the meantime.

Permanant Hiatus? This Crossing Death better be good! >:( (I just checked it out and out of the one comics you've put up, I like it!)

well, it was nice while itr lasted, so much for our intended other crossover, however, we might want to consider that because of the time discrepency that Alexis ends up in CD. but we'll wait til we're both more established :P