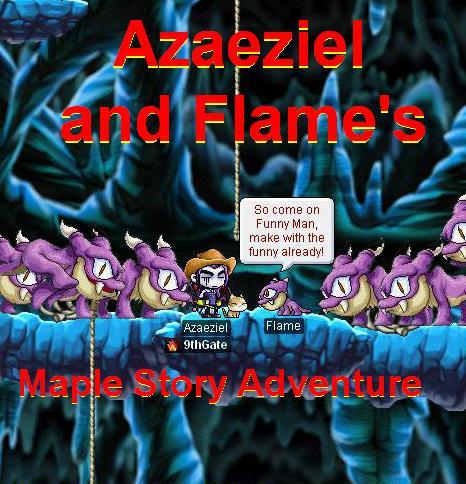 This comic will not have any set update schedule, but when I do update, it will be several pages as a set.

This comic is created using (slightly modified) screen shots from the free MMORPG Maple Story and as such, the images are probably copy right Nexon or somesuch, but as I am not useing them to make money (and this is a parody/comedy), I shouldn't be sued. (If I am then this will vanish in a flash! Ask and they shall be removed.) Every now and then, various other characters from the world of Bellocan in Maple story may make momentary appearances, if your character does, hopefully you won't mind, and if you do, sorry, it's a parody, and a comedy, so just laugh and continue on.

Various pages are also made using Comic Book Creator. A program I picked up at San Diego Comic-Con International last July, though I don't have off-hand the website for the company that makes that particular program, but as soon as I can I will give thier url and info so you can look them up and decide if thier program is for you.

Now that the semi-legal babble speak is over, I can enjoy my THIRD comic that I am regularly working on. As such, and as this is my time killer comic, don't expect super regular updates. It's just a catch as catch can comic for me.

Enjoy, and go read my other two comics Karen the Marilith and Saturday Knights , and thank you for reading!