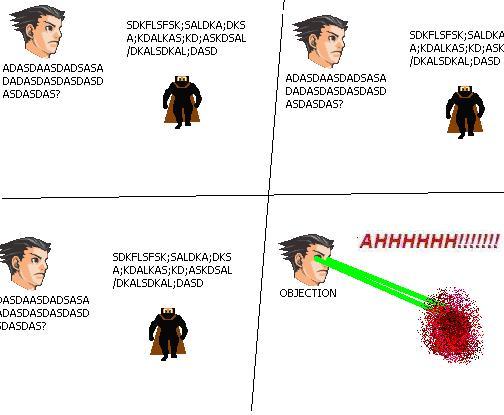 All of Zippo's comments reported :D

I'll scream so loud the whole town will hear!

no mister simpson that is sexual harassment

Hmm oh well, I might as well report Zippo's...but they are just damn too funny.

Ah crap, accidently reported DarkPower101010's post without any intention of reporting any. XP

And it's funny how you're the only one really pissed off. I'm the one who's being entertained. Ahahaha

I wouldn't be surprised if that was you who gave it a 1 and posted as an Anonymous. Seems pretty suspicious. If your goal was to downrate my comic. Guess again, I wouldn't really care because my comic is a joke and I don't really give a damn what anyone thinks of it. :P Good riddance you tool.

By the way. THE INTERNET IS SERIOUS BUSINES!!!11 If you don't get what I mean then please GTFO.

Epic lulz. I love it when idiots tell others to "GO MAKE BETTER COMICS IF U DONT LIKE MINES". If you really want me to show off my best work, don't expect it to be done in a day. I'm going to look over my quality and do necessary changes before releasing my work. Hmm, it makes me wonder if you do the same since alot of your background work are so MSPainty and you have the tendacy to have extra pixels around sprites that came from sprite sheets. I guess you don't look at your quality well. Your character is unoriginal too. I mean come on, darker orange tails with clothing? I've seen thousands of such characters. I can make a much better character than that and guess what? I don't edit characters and claim them as my own character. What about you? Oh and remember your bullshit arguement about Blaze ripping you off? Yeah, I've prepared a comic to prove your bullshit "facts" wrong. Also, learn howto make better textboxes, they're bland as hell.

I know I'm awesome. You?

that was pretty funny. lol.

And one final comment for you unless you decide to come back and make yourself a fool again. http://objection.mrdictionary.net/go.php?n=2283911

Hey Zippo. Guess what? IT'S A JOKE COMIC. I just KNEW you were going to come here.