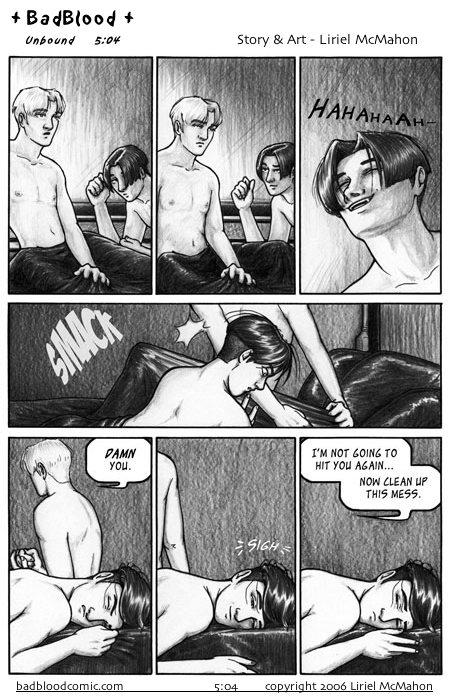 And so… that's it for now kiddies.

I'm done stuck good on the creative end of things, so instead I've been focusing on getting books #1 - #4 out in print (almost done with that), as well as redesigning the homesite.

You see, the reason these pages have been posted here is because I'm getting rid of them from the homesite and replacing them with larger more pretty page images :D

Starting Jan 1st 2007 these new pages will be posted (from the beginning again) Monday through Friday over at the home site: http://badbloodcomic.com

Feel free to stop by and witness the subtle improvements in art and dialogue – as well as staying tuned in on everything else BadBlood… there's no where to go but onward and upward ;)

Peace and be well,
~Liriel

http://badblood.com doesnt exist anymore..... what'd you do with it?

Aww is this comic ever going to be continued? :(

This page makes me think Badblood could use the AWESOME tagline I came up with for Anne Rice's Interview With The Vampire - "bloods not the only thing they suck!"

Ok, am I crazy or does Aiden seem disappointed that when Malden says he isn't going to hit him again?

WOW I loved this comic. Aiden cracked me up it was so funny.

I, uh... dunno what'll happen when I... get BadBlood updating again... ~Liriel

will you continue posting new pages on drunkduck once the old ones are all loaded onto your new site?

augh I forgot to rate o_o;

These pages are penciled georgously!! I love this story so far! I can't wait to read more of this!

xD He pouts when he says he won't hit him again... hah. He's nuts, definitely.

Heh, yeah I think I spooked even myself when I did this page XD ~Liriel

Oddly enough, this is one of the creepiest pages. And one of my faves. ^_^

Aiden is off his rocker. Or perhaps he never had a rocker. Heh.

Is it just me or is Aiden a tad nuts? Wait...yeah, I think Malden may be a bit too.

Who knows what goes on inside Aiden's twisted little mind... >_> ~Liriel

Ah I was right! It was Aiden's plan from the beginning hehe. I think he got jealous of Jared and wanted to scare him off *nods* I coudl be wrong