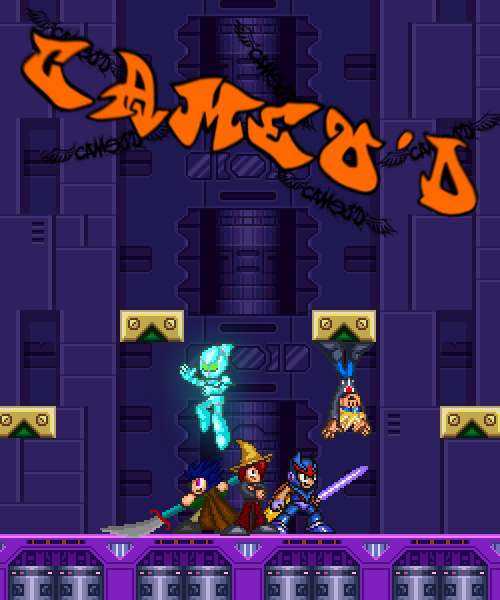 Welcome to CAMEO'D a verry much joinable sprite comic, as the name hints. th eorignal cast is Me, Rentorian, Flantics, Altimas and Cryosis(?). Unfortunatly, cryosis has YET to answear my PQ where i asked for permission to use his sprites. So untill then, i won't be updating ^_^

Anyways; We don't take recolors, nor do we take Bad Copy&Pastas.
Good edits only for us! And only MM7 ones too!

Oh, and anyone from existing crew might take the role as assistant. Haven't decided who tho :P

It's been over a year, and I thought I might ask to add a character of my own to this sprite comic.

@Everyone: Yea...both me and Kin have no access to our normal accounts (Me was banned, he was hacked) so yea, no updates unless Kin remakes this on his new account

When are you updating? I got a cameo I want to send.

good comic, even if it only has one page!

Man to lazy to pq you the sprites

i thought i commented on this on day one...huh... any chance of met Club returning?

I'll join when I got a character thought up and made, but my pq isn't working, so i'll post it here if that's okay.

Sorry peps, Bu we (altimas) is curently working on a short flash for this comic. Its gonna be the netx page. So it might take awhile to get it up ;P

HEY! I'll make the backgrounds when I'm read-- *angry glare by Kin* Did I say later? I meant I'll get started on them asap...*awkward laugh&

Uhm... No Anyways, Altimas and I'm working on bgrnds and stuff, So it might take another while to update, But do not fear, I've regained my spritesheet atleast, so no worries about that ^_^

Do you really want to know the answer?

Oookeey... Well its basically like INI ... wait, why am i writing this HERE!?

Hey EP! Cryosis said he won't let you use his sprites unless you tell him what the comic is about.

lol, the comments are making me giggle.

A comic introducin you 5? I sure keep an eye on this...BTW, are you interested in my Ra thor sprite, wich seems to turned into me in MM7 style

question...what is the general plot of this comic?

XD Fine. You'll be assistant. I was thinking of making you assistant anyway ^^ Well it would have been a bit problematic if you couldn't, no? ;P