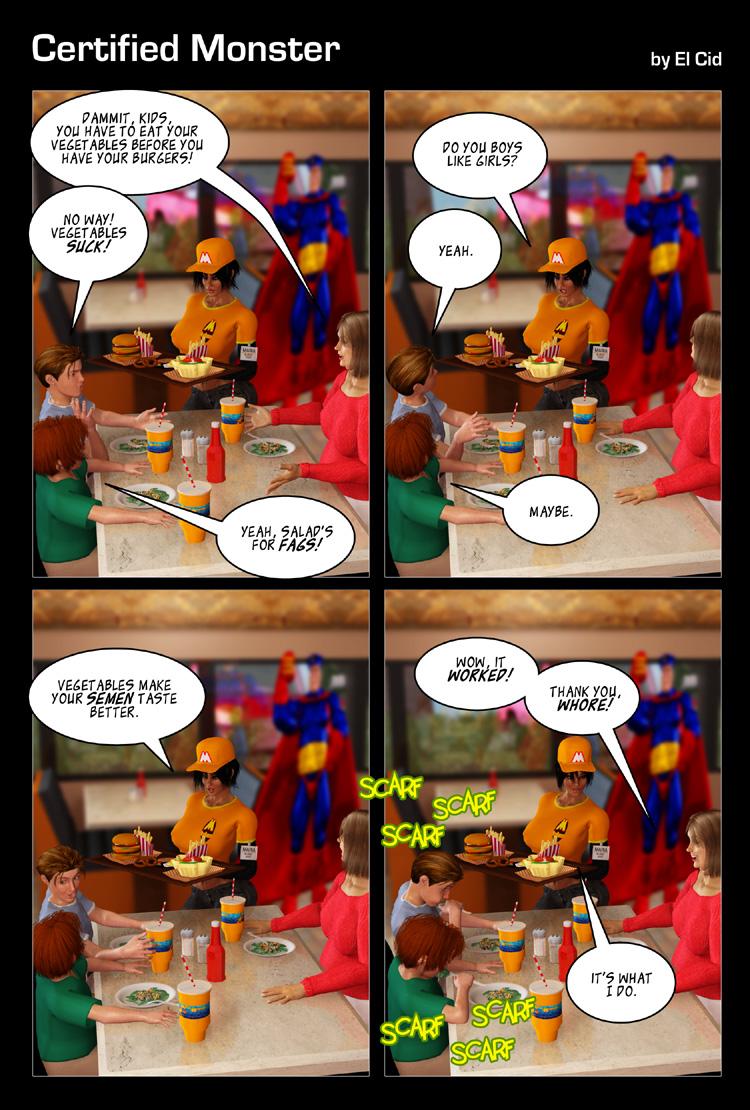 Thatâ€™s right, eat your veggies Drunkduckers! Itâ€™s true yunno, according to Menâ€™s Health magazine, certain foods (like pineapple, papaya, and melons) improve the taste of male ejaculate. And you should keep red meat, garlic, and onions to a minimum. Man, I wonder how they tested that? Iâ€™d have gladly volunteered to participate (not as a taster though)

This is going to be the last update to this comic, at least for a while. Iâ€™ve decided to switch over from doing a random â€œstripâ€ format comic to actually trying to write a series made up of plot-driven comedy shorts. Instead of rushing into that though, Iâ€™m going to take a little time and make sure the new comics are going to be as good as possible, and work out some concept issues. When I do get back around to posting those, Iâ€™m not sure if Iâ€™m going to tack them on as updates to this comic or if Iâ€™m just going to call it a day with â€œMonsterâ€ and start a new comic altogether. Weâ€™ll see. And also in the immediate future I think Iâ€™ll take a little time to catch up my other (understandably less popular) comic, which Iâ€™ve been completely ignoring for over a month now.

This comicâ€™s done surprisingly well, especially lately (#8 in the Comic Strip category, are you kidding?!!) and itâ€™s all thanks to you guys. So I want to give a big thanks to everybody whoâ€™s stopped by to read it, especially those of you who took the time to leave comments and ratings (this project, brief though it was, never could have lasted as long without you). Iâ€™ll try to make my new comic ten times funnier, and â€˜til then Iâ€™ll see you around the site!

Perhaps he ate a lot of garlic?

According to one of my ex's a vegetarians semen tastes foul.

That's one way to make them eat vegetables,but I wouldn't recommend it X]

The site in general just seems to be acting weird today. I think they're doing some kind of maintenance. It keeps logging me off and giving me weird error messages on the homepage.

Wow, that's the most awful thing I've heard all day! LOL! (but good advice all the same)

I've learned a lot from whores, like that I can only stuff 3 of them in my trunk. Any more and that thing pops open on the highway.

Thank god for whores! Is there anything they can't do?

Why didn't any parents think of this before? :O

Congrats on your current accomplishments! I'm now inspired to try and create my own comics. I'm looking forward to your future plans.

Really enjoy your humor and comix. Good luck with your next project.

Nice one! Looking forward to your return - and well done on getting to #8... That tells you something.