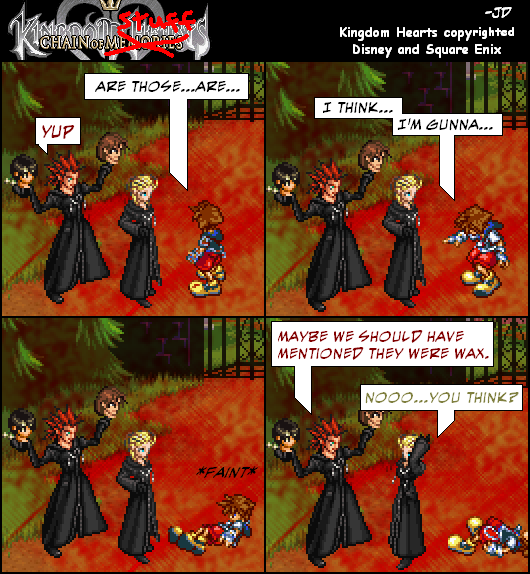 And this is the LAST comic I made for this series.

Will I continue it? Maybe one day.

At the level I am now, would I have done things differently in this comic? Absolutly.

I would have tried harder to avoid Cliches, I'd get rid of the 1337 speak, and I'd try to slow the pacing down.

But oh well, that's all in the past now.

Well, I hope you've enjoyed reading Chain of Stuff. If you'd like to read my current works, you can find them at


EDIT: I'm really shocked y'all that the comic did this well. I really only put it up here as an archive, because a lot of my fans wanted to see it again.

I really had no intention of it making the top 5, or…ANY top list or whatever. I guess I should be flattered, though I too think it's a little ridiculas.

Anyway, some of you have mentioned errors in my comics or things I could do in the future, but I'd rather you didn't. I'm not going to change anything. Most of these comics were made a year ago, and I really don't feel like messing with them.

The very day I found this I discovered this was the last comic... WHY GOD! WHY!

Awgh! I can't believe it's all over... I had so much fun reading it!

In hope of this ever continuing I vote 5 and I fave this comic.

Axel rocks. PLEASE CONTINUE IM BEGGING YOU!! and im willing to passionately argue at this point until nothing makes sense anymore.

Man, cliffhanger? That sucks, this had some real potential, I hope you continue...

please contine. It is an awsome comic please don't stop

You MUST finish ,..these are pretty much teh only sprite comics I recommend to anyone. You have done what I thought was impossible by making a sprite comics thats now in MY top 5 congrats!

Your the THIRD most read comic on DD over all!!!

Top 5 and you quit?! If I were in the top 5, I would continue a comic forever!