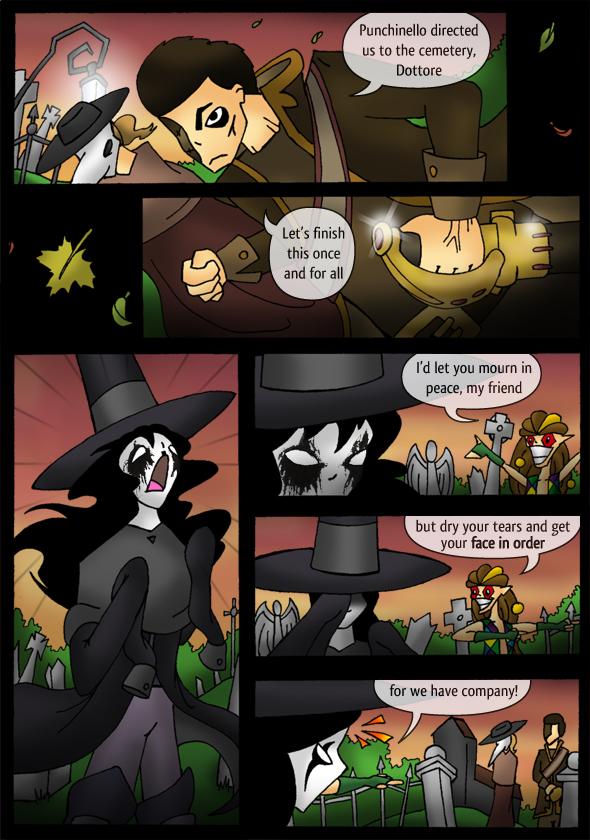 Did you see what happaned there?
Pierrot just wiped away his running make-up with his sleeve, and his usual painting re-appeared.
They aren't really just normal guys with painted faces, those are their faces!
That's the best way I can explain it. Harlequin hardly draws new diamonds every morning.

This is amazing, really, it's a blasted shame we haven't seen any since the last page. Hope you come back to this some day.

you are going to Update Soon Right.

are you going to Update Commedia dellArte 2 Soon.

Well, that's 3 of my favorite comics that are on hiatus. At this rate, I may actually have to go outside.

Why you are pulling an act worthy of me, and going months without updates. Hope you are doing alright.

Waiting for an update. you ok? It's been a long time.

My mascara does that, but its natural state isn't very attractive, so I stopped wearing it.

Uh-oh, this is just what they don't need! Say, is Perrot ever gonna be happy again?

Cool make-up, very handy for them, since they're constantly wearing it. (It only makes sense that it'd work like that.) ^_~

Time for some revenge

I wish my mascara would do that, lol.

Humph! If all the villain has is a sword against Harlequin, he's toast. And perhaps Pierrot is so much in pain he will fight as well. He's got that ticked off look in panel 4.

If I was Pierrot I'd be goddamn mad at my cheshire friend for wearing a smile like that while I was mourning. But I guess he's used to it.

Yes, yes I saw what happened there O.o