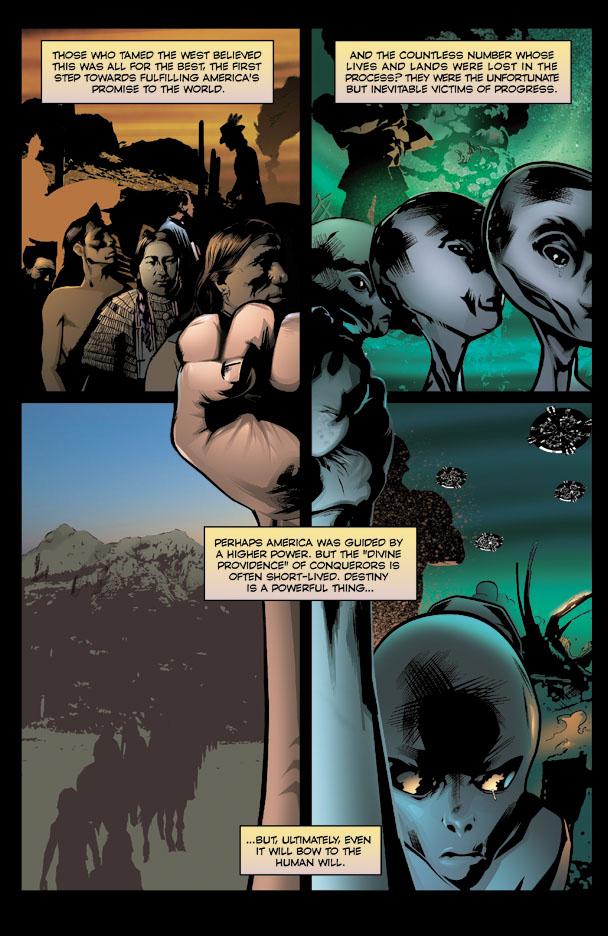 Cowboys & Aliens was created by Scott Mitchell Rosenberg and written by Fred Van Lente and Andrew Foley. Luciano Lima did pencils. Inks were done by the team from Magic Eye Studios. The color was done by Andy Elder. The art for the prologue you see here was created by Denis Calero.

If you like what you see here, please check out the full graphic novel, available to read online at http://wowio.com/users/product.asp?BookId=5081

Saw your Superbowl spot for the film. Congratulations! It looks great!

i read this all the way back then and now its turning into a film? wow it came a long way since it was published here

Great stuff! Aliens for me and cowboys for my Dad!

And please check out all the latest news about the upcoming film at http://www.facebook.com/cowboysandaliens.

Looks pretty interesting. Hey, thanks for putting us on the recommended reading list! :)

That is pretty darn amazing. Nice writing, pacing and art.

I wasn't expecting much out of this since the concept honestly seems a bit hokey. But this isn't half bad. The artwork is especially good, but the styling of it seems a little bit too realistic for an over the top concept as cowboys killing aliens. You really ought to play up to the hokey nature of the concept. If you do, it CaA could be the next Snakes on a Plane! And one more thing, if I don't see a cowboy lasso a spaceship sometime in this comic, I will be very sad.