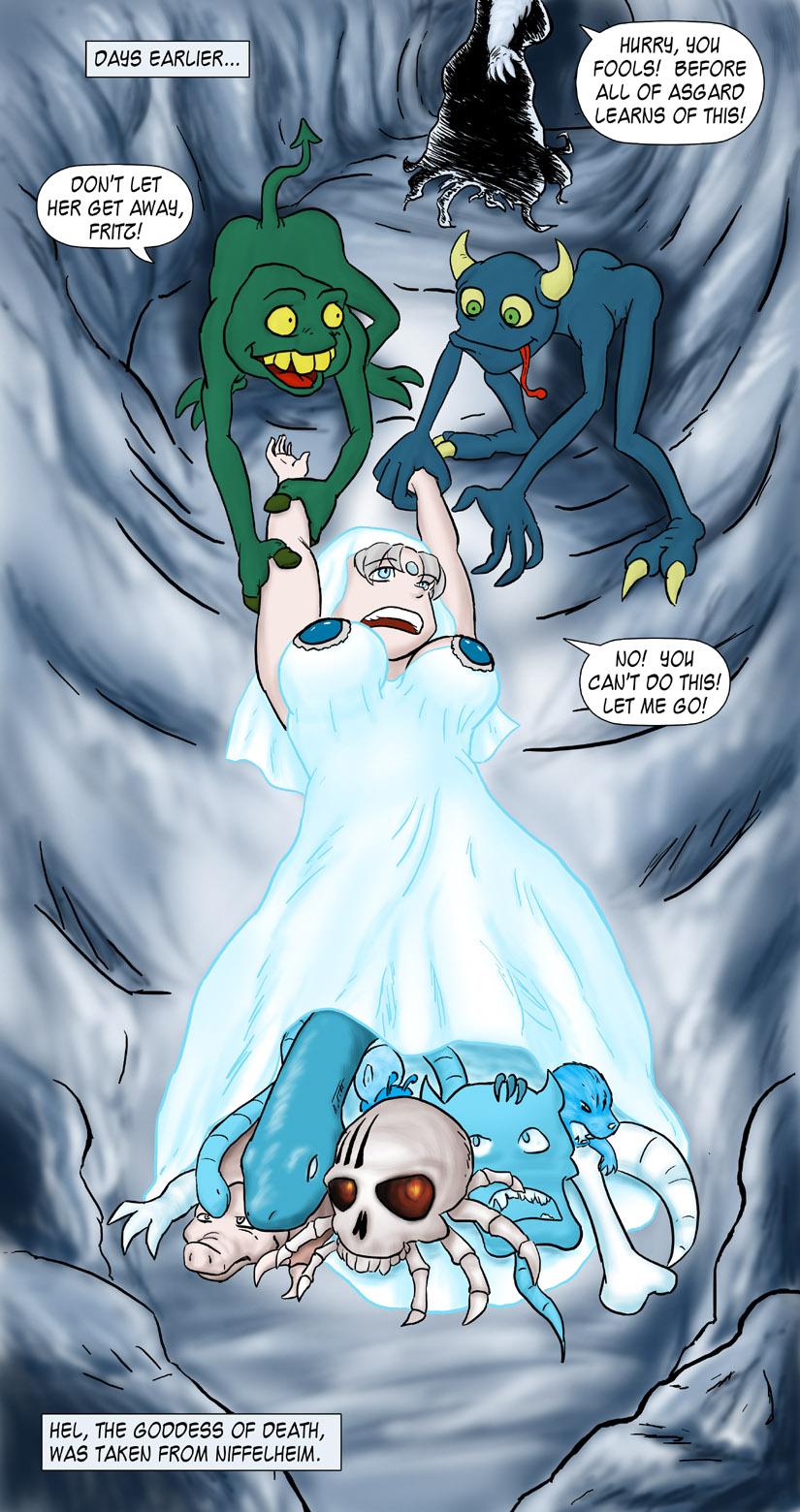 “It was an honor just to be asked to do the Yuuki pages for this first chapter. But when I found out that I'd be introducing an entirely new Yuuki character, I got really excited! Hel hasn't even appeared in Yuuki's own comic yet.

The two dopey characters are styled after the work of Ralph Bakshi. I've named them Max and Fritz, although this might be their only appearance in the series. I kept having to scale these guys back, because the more complex they were, the less they looked like Bakshi guys. Keeping them simple also contributed to making them look somewhat creepy and deranged.

People with a keen eye might spot a reference to my contribution to the Crossover Wars. I'm not going to spoil it, though.

There's another comic coming this Thursday! Don'tcha dare miss it!”

Three things. 1. She's got huge breasts. 2. Her arms or over her head. Breasts move and change shape when you do that. 3. Kiss my butt.

Someone really doesn't understand the physics of breasts. Those look like they're trying to escape her body.

Fes, Tanya, and Mark gave Crossoverkill a shout-out on the latest episode of [url=http://webcomicbeacon.com/2010/10/20/episode-137-dead-webcomics/]The Webcomic Beacon[/url], and then it turns into a conversation about crossovers. It's about 40 minutes into the show.

Ah, it seems I wasn't the only one who thought of Brat-halla as well, but my thought was, "Hel from Brat-halla would never end up in this situation without a lake full of mead being involved."

The first thing I thought f when I saw the name Fritz was Fritz the Cat, and it made me think those creatures were going to deal with Hel in a manner ill-fitting to the age level to which this comic is aimed. It's funny, though, because I have an Uncle Fritz, and I didn't think of him first.

hey! we have a cameo in there, cool

Really nice work, Neil. And I know you said the cave was quick and easy to color, but it looks great nonetheless!

Everything and everyone on this page is freaky!

I'd still hit that.

Man, you wouldn't wanna look under that dress.

At least she doesn't have to shop for shoes! Great page Neil!

Hel IS a half-rotten corpse, but as they say in Brat-Halla... its the bottom half thats rotten ;) Also... I spot a certain legged skull ;-) This is off to a good eerie start

hehe, and now ursula is going to try and convince hel that all she needs is her looks to be beautiful. she was half a rotting corpse, but then she decided to get reconstructive surgery, it would look better but the surgeon accidentily left his watch in. i wonder what the wedding dress is for.

In Yuuki's universe, she doesn't have that appearance. I[i] was [/i]going to do a little homage where the scene would be lit different and half her face would be obscured slightly, with the shadows giving the appearance of half-rotted face, but I ended up leaving it out. It would have been a cool trick, but it probably would have confused some people.

Isn't Hel suposed to be half-rotting corpse, half-beautiful woman? Still a nice design though, but I am confused.

Yikes! It's Ursula, but that sure ain't no little mermaid.