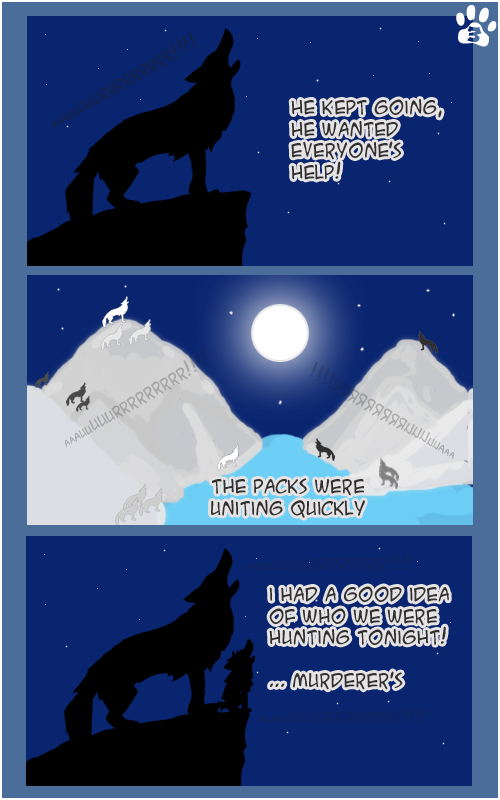 Yeah, I'm sad to see you didn't go anywhere with this! It looked promising.

So, is this comic dead? It looked like it had some great potential.

Some grammatical errors (all of them punctuation), but my initial thought was simply: "OH MY GOSH, CUTE!" Because, you see, I saw that page when he wuz widing on his daddy's back and... yeah. INSANELY cute. I'm watching you now.

So beautiful. I love wolves, and your comic and art is great so far. Can't wait to see more, and thanks for coming by my comic also ^^

Very interesting start! I like the idea that this is about a pack of wolves and how they interact. You've done quite a good job of capturing postures and features. You studying is showing! Great stuff. Thanks for the review on Plague...Suppose it is a little weird...Heh. never said I was "sane."

wah im crying, Heri is so cute and it's so sad =[ Ill be looking forward to more.

sounds evil! KILL THEM ALl!

clever use of the 1st and last panel! It works without too much work :) Murderers for lunch?? o oOh..I had to catch up on the comic :) Good work!

Don't let 'em get away! Break their legs!

the last panel with the cub by his father...sniff...god im such a sissy...

glad you like, but the name of the Comic is Cub, the little guy's name is Heri... keep tuned in will appreciated