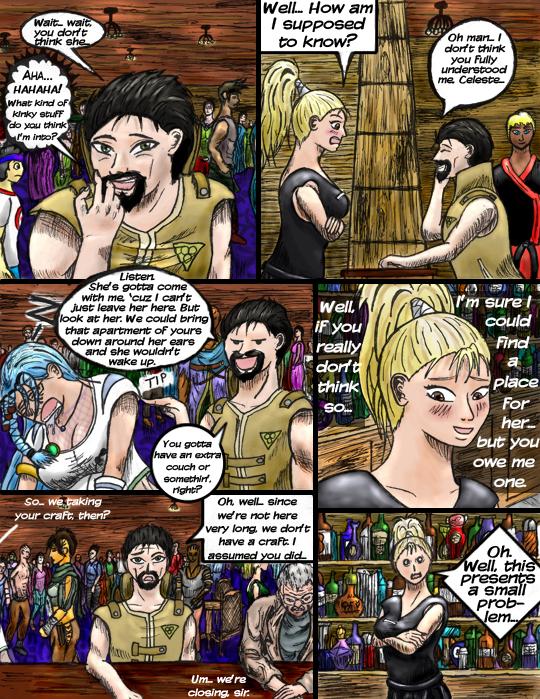 **Note** So, reading this, years later, I'm now realizing that I probably didn't make very clear the joke/implication from the last page, because even I had to think about it for a second before I remembered… There's my superb writing skills at work. >_> It went a lot better in my head, I'm sure.

Anyway, my original intention was thus: Celeste accepts Farin's self-invitation knowing that he meant it in a lovemakin' kinda way. But then he invites his sister too and she gets all flustered because she thinks they might be into weird three-way stuff or something. Farin then reassures her that Brin's an extremely heavy sleeper and would sleep through any ‘noise’ they may or may not make in the next room.

So, there you go. Maybe I'll go back in and switch words around at some point to make that more clear. **End Note**

Anybody know why this is a problem? If not, you'll know by the next page ^_^

This is gonna be the last page in the bar setting, for a little bit. Thankfully too, I was getting soooo tired of drawing those damn bottles.

Oh, and since I also got bored of drawing the random background people, it's officially cameo day! Everybody following Dawnbringer gets a character appearance! Yay! Here ya go:

Panel 1: On the left we have the Ghostrunner from grin n spirit, and on the right is the Swordsman from The Temple of a Thousand Tears!

Panel 2: Here we have Cade from Salt the Holly! (In his ass-kicking clothes, too!)

Panel 5: On the left is Orn from The Faction, and looks like Stan from Shades is hoping to get in one last drink.

DAJB: Yeah... must be one of his off days. This is what he does when he doesn't have to look after Sunil, I'm sure XD Peipei: Aww, well thank you! And she does [i]technically[/i] have a ride, but... Hogan: Thanks, brother!

Awesome! It's good to see Orn in this update :3. You drew her well I must say :D. And sheesh! He's got no ride?! And I assume she doesn't have one either? o.o eeek :s

Ha! Thanks for the Stan cameo! Can't say I ever expected to see him in the type of place Ratchet was ever likely to frequent, but he does look very much at home!

Well, I try not to, but it's been known to happen to me before every now and again...