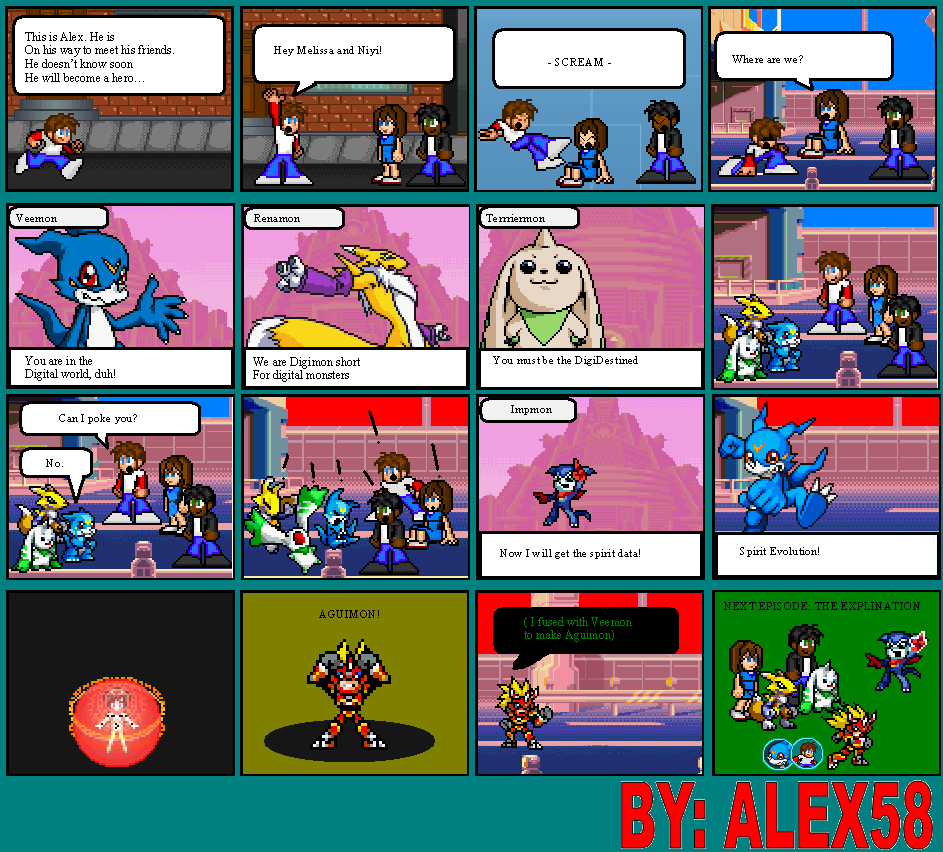 The Beginning! A New World!

Pretty good comic but yeah Biomerge would work better. And the Digimon you were talking about was Gallatmon Sephiremon(Someting like that) And...Megagargomon

spirt digivolution is when only the humans digivolve not the digimon...

if you ever look at this agin, try this. 1:the 3rd seson had biomerge (cant spell it) digivolveing whih is digimon and humans fuseing together. can't remember if that is what that digimon's name is but aguimon don't sound right. i'll get back to you on that.

I cant wait to see how this turns out. im pretty much a digimon fan

and i'll send my sprites.

If you want to assit send me your megaman sprite

I love digimon if you need help PQ me !

good but where am I

Ew, i can't say im a fan of your paint effects and the grammers pretty bad. The story is going way to fast, you could've broke all that into 2 or more comics atleast. But we'll see how it goes, if you improve i'll consider favin it!

You forgot something too...

Now that I notice... I used alot of panels! (Sorry for the triple post)

@Bekefel- I don;t give a shit for what you say. @Netsaver exe- Well they(Digidestined) did not know yet what to do with D-tectors.

The humans say sprit evolution not the digimon. If you are regarding to the t4h season. I haven't seen when they digivolve in savers yet.

Oh boy you could not have caught me at a worse time. 1> The bubbles look awful, they have way to much excess space. 2> Crappy paint exclamation marks look awful. 3> Your Megaman edits look awful. 4> Many of your BGS are crappy. 5> Your missing bubble tails. 6> Alex has little white pixels around it. 7> The mouths look awful. I could continue if you like? I dont want to because I have already wasted enough of my time.

@BLK: Ok, I'll try i was playing a game while I was doing this. @Zero:In Digimon Frontier it is spelt that way.