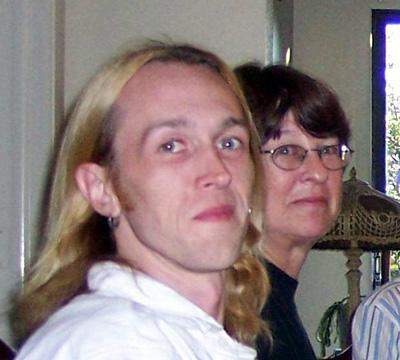 All the sci-fi stuff I do is thanks pretty much to my mom, who raised me on reruns of Star Trek and first runs of Battlestar Galactica and Buck Rogers. In more recent years we would watch Buffy, Gargoyles, Babylon 5, and Firefly together. We went and saw Serenity in theaters after I caught her up on Firefly via the DVD set. SG-1, Batman, and dear lord, we actually destroyed a VHS of Independance Day and another of Die Hard from watching them so many times. Die Hard, not quite with the sci-fi, but crazy action and clever banter. We must've watched both movies a few hundred times.

As a child she read me Shakespeare, most notably “Hamlet” and “Macbeth”, along with “Jabberwocky”, by Lewis Carroll, both of those probably go a lot towards explaining, much like the sci-fi, why I write the types of stories I do. Also, Marvel's Larry Hama written GI Joe comics, and when I ran into a word I didn't know, mom went off with me to the dictionary to look it up.

We shared a dry, somewhat warped, and frequently morbid sense of humor that no one, not even my dad, ever really seemed to entirely get. Hexx is the closest. And yet she was also the most gentle, giving person….

Last Thursday morning my mother had a heart attack while driving from my grandparents' place – where she lived part time to take care of them – to the house she shared with my (step)dad.

Though she was dead before paramedics arrived, they were able to get her heart re-started, after thirty minutes of oxygen deprivation. She was effectively brain dead, with her heart rate being maintained by drugs and her breathing by a ventilator.

I read her “Jabberwocky”.

Life support was disconnected Sunday night, and my mother died surrounded by her parents, my dad and older (step)sister, my mother's cousin, and my uncle and his wife. Hexx stayed with Persephone in the waiting room next door because we didn't want to expose the baby to whatever may have been floating around ICU. I held mom's hand and laid my head on the pillow next to her, singing her songs she sang to me as a child until her heart slowed and stopped, everyone else had left, and Hexx had to come in and get me.

My mother was, of course, my mother, but she was also my greatest influence and my oldest friend.

I am SO sorry to hear this. I see it's been awhile since you posted, and I hope that somewhere you're doing well. [url]http://user.drunkduck.com/houseofmuses[/url]