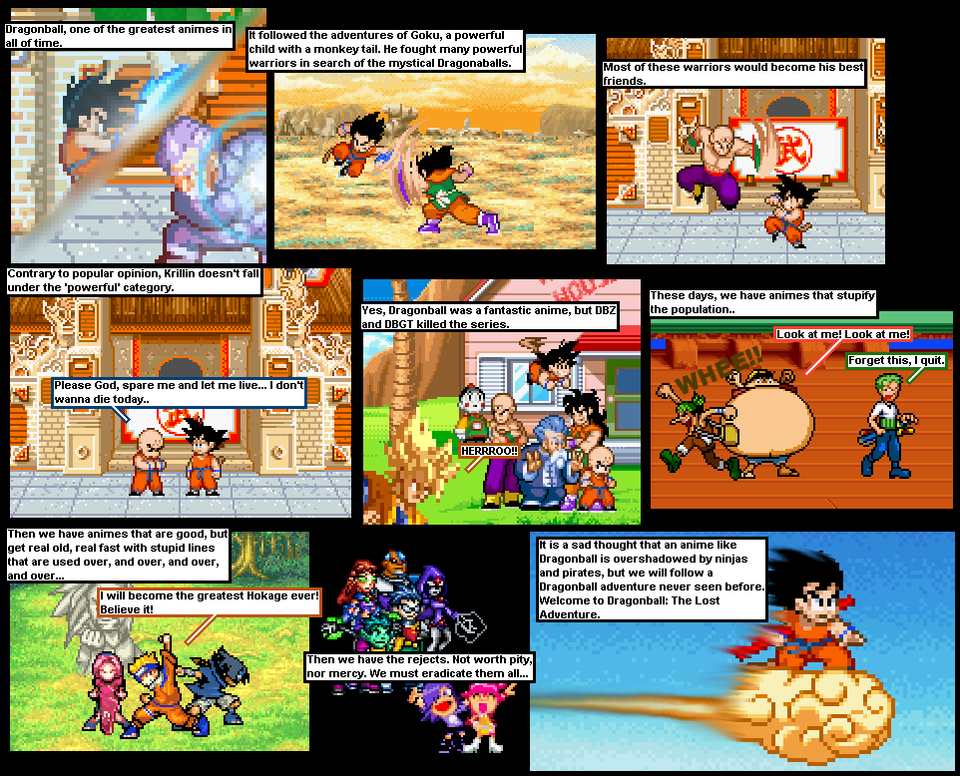 Introduction by the Author

Here's my little view on the whole ‘anime’ thang. It is also an introduction, and if you weaker minds didn't already know, this page is not part of the storyline.

To tell you the truth i don't think that dbz killed the anime it was GT.The fights in gt were so fucking boring.

Dragonball was very decent anime in its time.

Naruto is what the fad now? But it's more as said, creative.. I still like DBZ though.

DB earned his fame mostly because it was probaly the best anime back then, but now we have the "future" anime. So you only like DB only in under the anime category? The thing is, it got old since you can predict what's gonna happen next(in all animebut too obvious).The large yelling,beating the crap out of each othor, super ripped muscles. And Akira Toriyama was forced to make more DB, that's how it turned to DBZ & DBGT

HEY!Where did you get the Hi Hi PUFFY AMI YUMI sprites?Please tell.

I know, I just needed to make a point.

Oh, I wasn't insulting the comic or anything. The show has alot of great action in story if you look past the anime style. And I don't like the theme song either...

Naruto is a very exellent anime and I do indeed enjoy one piece, and I cant stand the Dragonball anime but I have a love for the manga! this seems pretty good I'll be keeping an eye on it.

ALRIGHT! I like dragonball as well, and I wondered if someone would do this!

Never heard of Bleach, and I never really liked Gundam.

Hehehe... you are so right! But have you seen Bleach, Gundam Seed, and Gundam Seed Destiny? Those are good animes, not like Naruto or One Piece. But I do know some people who LOVES Naruto and One Piece...

Tony, maybe for you. I think that it tries too hard to be an anime with its overused anime expressions, and those crappy songs the Puffy girls sing. Jon, deal with it. If I think One Piece is one piece of crap, then don't read.

Ryan, I lost all my sprites, so I decided to start a new fresh sprite comic. I am planning on drawing Life Bytes, since I really don't wanna remake those sprite sheets all over again.

Oh come on, how many comics do you need? Why don't you just make a bomberman comic while your at it. Hell throw in a sonic too even. And wait, there's a Hi Hi Puffy Ami Yumi game? Damn, they'll make a game out of anything on game boy. Disney Princess was the number on selling GBA game this month for some reason.

THAT is simply your opinion of One Piece.

Dragonball isn't shallow. If DBZ, or DBGT never came out, then Dragonball would be seen as one of the best animes. I mean, the whole 'Super Saiyin' thing, and 'power levels' really screwed the series up. Plus, it is being compared to all the other animes, instead of the ones from its time. One Piece can not be allowed to exist, no matter how creative you consider it. Naruto may be good, but in my opinion, Naruto is the most fucking annoying character in the history of mankind, and ninjas can get old after a while.

Also, One piece and naruto have been bastardized by american translations. Naruto is still watchable, and the scripts haven't been changed that much, but the things they chose to not translate and the things that they did just ruined it. They can't pronounce any japanese words, but they still chose not to translate 'jutsu' into 'technique' for reasons I don't know. And One piece is so annoying that i can't stand it being background noise. Heh, sorry for these longass explainations, but ever since I started watching 'good' action anime's like YYH, FMA, and Trigun, where they actually develop characters and have the bad guys fight not solely on the sake of being bad guys, I just can't believe I liked such a shallow show like Dragonball.

uhm... You realize that Naruto and One piece, even though they are all what you said, are still immencely more creative than Dragonball. Dragonball is a lot like Bob and george. It isn't that good, but because it was the first, it can get away with a lot of clichÃ©'s without anyone going in a hissy fit.