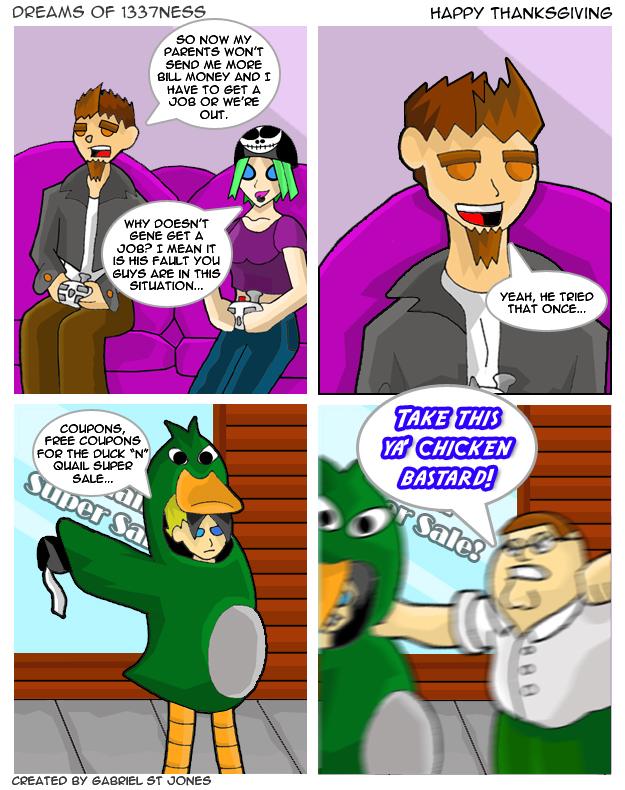 News, Replies, and comments will be up as soon as I switch to my other computer. This ones being an asshat so I just want to get this page up before it crashes.

My computer took a crap on me recently too...here's hoping I haven't lost my D Drive....

Yeah! What the crocty said!

:( Why has there been no updates in forever? Is there a good reason ShinGen? If there is, I shall give you the antidote, otherwise, goodbye! >:D But seriously, why? :(

Peter: You bastard. Gen: What did I do? Peter: Take this! Gen: AH! MR Wigglesworth is broken again!!!

lol I just noticed that his costume is the drunkduck-guy (does he have a name?

lol xD that is classic

Genesis doesn't stand a chance, we are talking about a fat man who has hit a kid, a woman, a pregnant woman, and a giant chicken mascot. So yeah, no wonder Genesis is allergic to work now.

lol I remember THAT episode of family guy. hahaha (do we see kage-bunshin-no-genesis in the next page)

I've only one Constructive criticism, Coleco needs a line or something above her eye. Other than that I love it

Is the duck, by any chance, drunk?

I as much as I don't approve of Family Guy, your comic is good.

man peter sure is blind lately

This could end bad...The comic I mean, if someone has never seen that Family Guy...I never use cultural references...

The battle of the Year!!

Peter and Genesis battle would be awesome!

Nice. But does this mean the next three comics will just be Genesis fighting Peter?