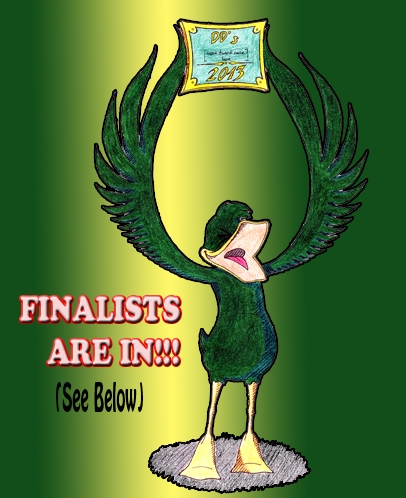 Volunteers should be recieving assignments soon and we can always have more.
~Genre Awards~

Best Action Scenes in a Comic

Best Romance in a Comic

Best Use of Medium

Outstanding Achievement Within the Community

Congrats to all the finalists!!

Two nominations? Hooray! And I didn't even remember to ask anyone to vote for me.

Two nominations? Hooray! And I didn't even remember to ask anyone to vote for me.

Thank you for the nominations! :D

Cheers for the vote of confidence BraveNewWorld!

AND - Roy, there isn't a category that describes what an amazing artist you are. That you can come up with something overnight that many would agonize over for weeks or longer -- well, tell me what label makes sense to you and I'll vote to have that award next year just so you can win it.

Congratulations, nominees! And, on behalf of the many talents that make it happen: thank you for nominating the 2013 Drunk Duck Radio Play Comic.

Congrats to all the nominated - will be checking a lot of these out! Accidentals looks the business!

most dedicated creator? that's like a medal in the special olympics when you are not even disabled.it's like you are saying you really suck but you work hard. this nom is an insult to me and my work. i don't need your fucking pity or your lame nomination.

Thanks for the nominations! And congrats to the other nominees. And, Al, you know I'm onboard for any Crossoverkill follow-ups.

Wow. CROSSOVERKILL got nominated in FIVE categories? And two of the comics of which it got composed got nominated in other catagories? (Fusion, twice?) VERY flattering and fulfilling. Thanks all of you who voted for this---this is definitely an encouragement to do a THIRD Crossover comic, a la CROSSOVERLORD and CROSSOVERKILL.

The awards sure have trimmed off some categories this year, but congratulations to all of the nominees.

Thanks to everyone who voted for Heroes Alliance, and thanks a lot for the "Outstanding Achievement" nomination. Congrats to all nominees!

I sent my nomination acceptance to Niccea, but it's already up at my page. Thanks to all. http://www.drunkduck.com/A_Deviant_Mind/5439488/

Congrats to all the nominees. There certainly are a lot of categories gathering recognition this year!

Congrats to all those nominated

Congrats to all of the finalists, and I wanna give special thanks to everyone who nominated me (not sure how I got outstanding achievement in the community though...)

congrats to all...and thanks for the noms! didn't expect that! showing up at your houses and staring blank-faced at you through your windows actually worked!

Congrats to all the nominations! This list represents a lot of good reading!

Aww, no nominations for me. Maybe I need to have readers first. And try better at the other things in order to get nominated. I really did think I might get nominated for Most Improved Art, but oh well. I was thinking of doing a Behind the Scenes revolving around not being nominated for anything, anyways.

Same here, thanks everyone, I did not have time to make a "for your consideration page" this year and I thought I was out of the pictures. The pirate balthasar and his crew of merry pirates thank you, ahr ahr ahr!

THanks everyone! Without even having a chance to make any 'consideration' thing, it's great that BR got nominated :)