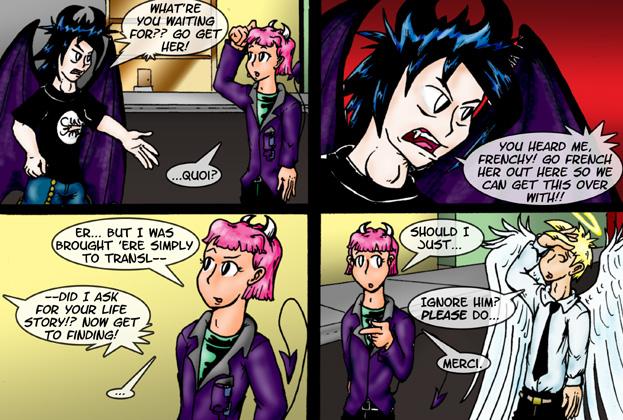 Does anyone know what happened to the rest of the comics? They seem to be down.

uh i think this comic is officially K.I.A.

OMG jaunt! i skipped 500 comics and the muffin person who always commented a paragragh and gave a five EVERY SINGLE COMIC is gone now and you the guy who only gave it 2's and a sarcastic snide EVERY OTHER COMIC are giving it a 5? and a good review? THE WORLD IS OVER!

This comic drips acid, that's why I like it. I have a mindfuck anyway, because I started reading the regular elijah and azuu (I almost left it because I didnt understand the beginning with the french soul, but I had a little patience) and it's extra-nice to know the beginnings of all the characters. I hope someday you can make profit of this to keep doing E&A.

Always glad to reread the archives. ^^ This is probably the longest-running comic (by number of pages) that I've seen to date. Way to go! It's so cool to see the way the art improves, too.

Well I gotta say, in the beginning I really didn't like it much, but I stuck with it and I grew to like the characters (especially Orzo) and actually care about them. As it went on it got funnier and funnier. I'd say you really grew along with the strip and that's great to see. AND you got praise from the guy who does America Jr and that's awesome!!! Hehehe. Anyways, thanks for keeping on and hopefully you can forgive my earliest comments. I'm on to the new ones now!

Less than 24 hours and I finished this whole thing. Now to start the next one.

Ok, this comic rock. I hope you start uploading it again

Devourer YOU SUCK! These comics rock! Ive just finished reading the archive! I wish there was a rating hihgher than five.

lmfao, I love this.

That line "go french her out here so we can get thi sover with!!" classic!

You never fail to make me smile.

Lol, funny. I really like drawn comics... I'm a pretty good drawer, but I don't know how to use the printer/copier. And don't listen to Devourer. He doesn't even HAVE comics. Hypocritical jackass...

Nice use of French. In light of recent events, any use of French, the French, French fries, or a certain type of kissing ... should be encouraged beyond all reason.