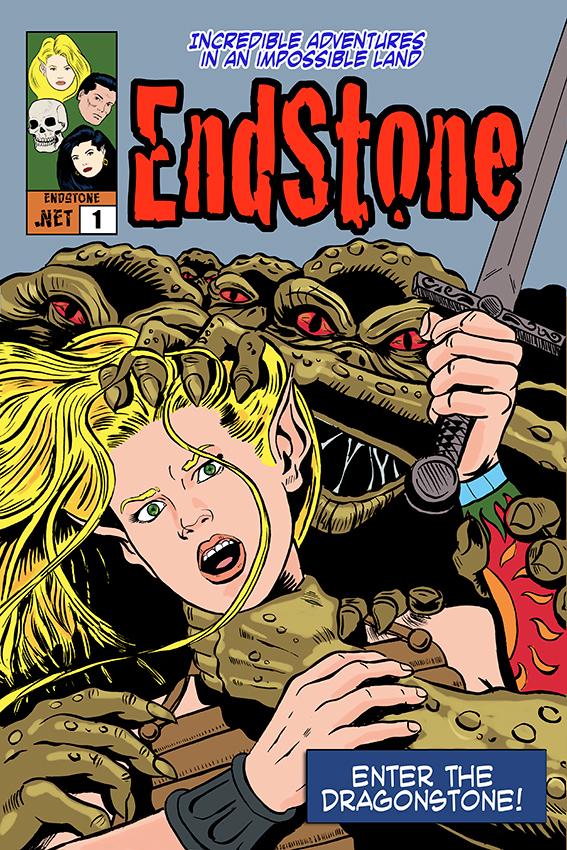 Howdy again. I'm taking a slight break from the main story this week and featuring a re-do cover for issue 1.

I was never satisfied with the original cover for issue 1. Mostly, I thought Kyri should have been on the cover and it should have featured something from the story. Now that I think about it, when I did the original cover, I wasn't sure what the story was about entirely or whether Kyri Thunderhead was even going to appear at all. So maybe that's why she wasn't on the cover – LOL. So here is my second stab at it.

This one was done old-skool with a brush, ink, and bristol board. In fact it's the only non-digital piece so far in the Endstone run. The colors (flats) were completed in Photoshop.

Issue 3 starts next week. Tune in as the whole issue is going to be one drag-down, knock-out extravaganza.

____________________
Responses from last week's comments:
plymar - Thanks again for your support.
Juvenile Jay - the love just keeps getting tougher and tougher in issue 3
Ironscarf - Thanks. My background is actually in film rather than art and I try to approach my layouts like the storyboards for a film. At least that's the goal.
Crimsonskystudio - thanks for stoppin' by.
Doctor Shadow Thanks. The kick in the face was a last minute addition to the page.
Lemniskate - And they're not really all angry at each other — yet.
SoItBegins - Actually this family was happy - relatively at least– for a socially taboo, cross-species union between two powerful stoners. I think we could just be catching them at a bad time.
dueeast - Thanks! This page went through many revisions so I'm glad it worked for you.
theends , Zephyrion , armandoB - Thanks folks. I really appreciate you stoppin' by.
DAJB - Nothing like a chick fight for the Holidays. Always tops on my Christmas wish list.
amanda - Strange. Maybe it's time for a movie on the Great Chicago Fire as it's in the collective unconsciousness. Hey if they can make a movie about 2012. . .
Adam Black - Thanks Adam I appreciate the comment. John Buscema is one of my heroes.
khard12 - Ain't family reunions grand?
theBSDude , AzuJOD , I Am The 1337 Master, Brogan , Hugo Maximo , TheMidge28, and DragonDeadite - Thanks folks. I really appreciate your continued support.
Streetknight - Don't ever let them tell you it's the season to be jolly. It's a lie.
Andaren - No she's not daddy's girl anymore. I wonder if they have support groups for father's who have been battered by their daughters.
MeHighLow - Thanks again for stoppin' by.
SCAScott and mattchee - Thanks. I'm glad you like that last panel. That panel with the flying kick was actually going to be Kyri standing in the shadows, but I changed my mind and redrew this panel at the last minute.
GF255 - Thanks. I hope you stop by again.

See you next week and keep on keepin' on.

Lookin good! ANd I dig seein' the traditional stuff. I should do more of that!

Oooo, and the flying kick Kyri stays in the air for another week... Will she be coming down? Love the old skool cover, BTW.

Such a cool classic feel - right down to the price tag! Love it!

Very nice, I like how it's the Comics Code stamp on it.

This really takes me back: getting the genuine American Marvels over here (UK) was pure magic when I was a kid; looking at this, I can almost smell the fresh printers ink again. These days, they mostly stink in a different sense!

Love it! The "Marble" comics cover takes me back.

Me likes the cover. To me, a good cover should catch your attention and make you want to know what happens in that issue. I find that's most effective if the cover can stand on its own as an image (namely, if it was taken out of its original context it'd still be interesting to look at). I think you've got that going on pretty well. I'm also digging the new banner at the top.