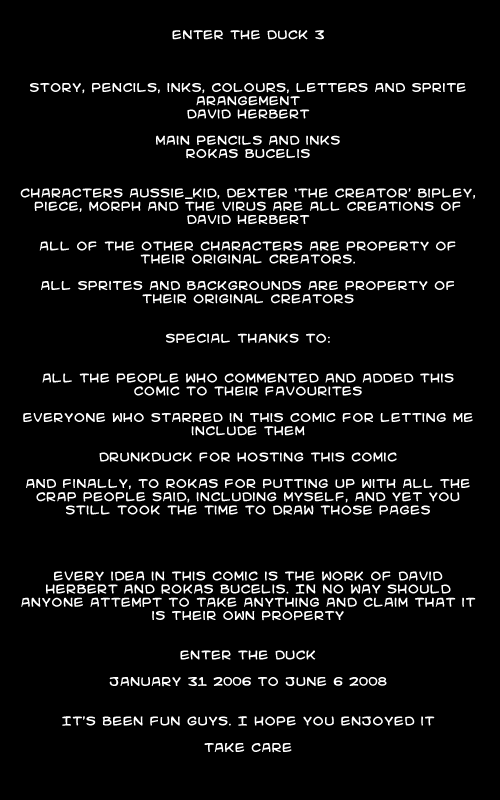 Well, that's it. After about seventeen months of this it's finally over. My feelings on the end? Well… they're rather mixed.

On one hand, I want to keep going to the end, but I know the quality would drop even further. I wouldn't be doing it because it's fun, it'd just be a chore that I feel needs to get done, and when something feels like that to me, I tend to not always do a good job. So, while I wish it weren't so, we have unfortunately reached the end.

As stated above, I thank you all for lending me your characters and your support for this. I would have said dollars as well, but nobody donated. Which is good, because I'm a firm believer in if you have a job to do, you do it. EtD isn't a job, it's a hobby, so I can drop it anytime I please. But if I got paid to make a comic, it'd be a job, so I'd have to see it through to the end.

Anyway, thanks again to everyone, especially Rokas for putting up with all the things we said about him in the beginning. If you want to see more form him and me, then just go to Age of Ends, which, as it appears to me, is starting to bring out some more potential in both of us. By this stage, after 350 pages, we'll probably be so much better than before.

And so, I close one final time and hope you will also join myself and Rokas in our future projects, and find much more enjoyment in them as you did in this.