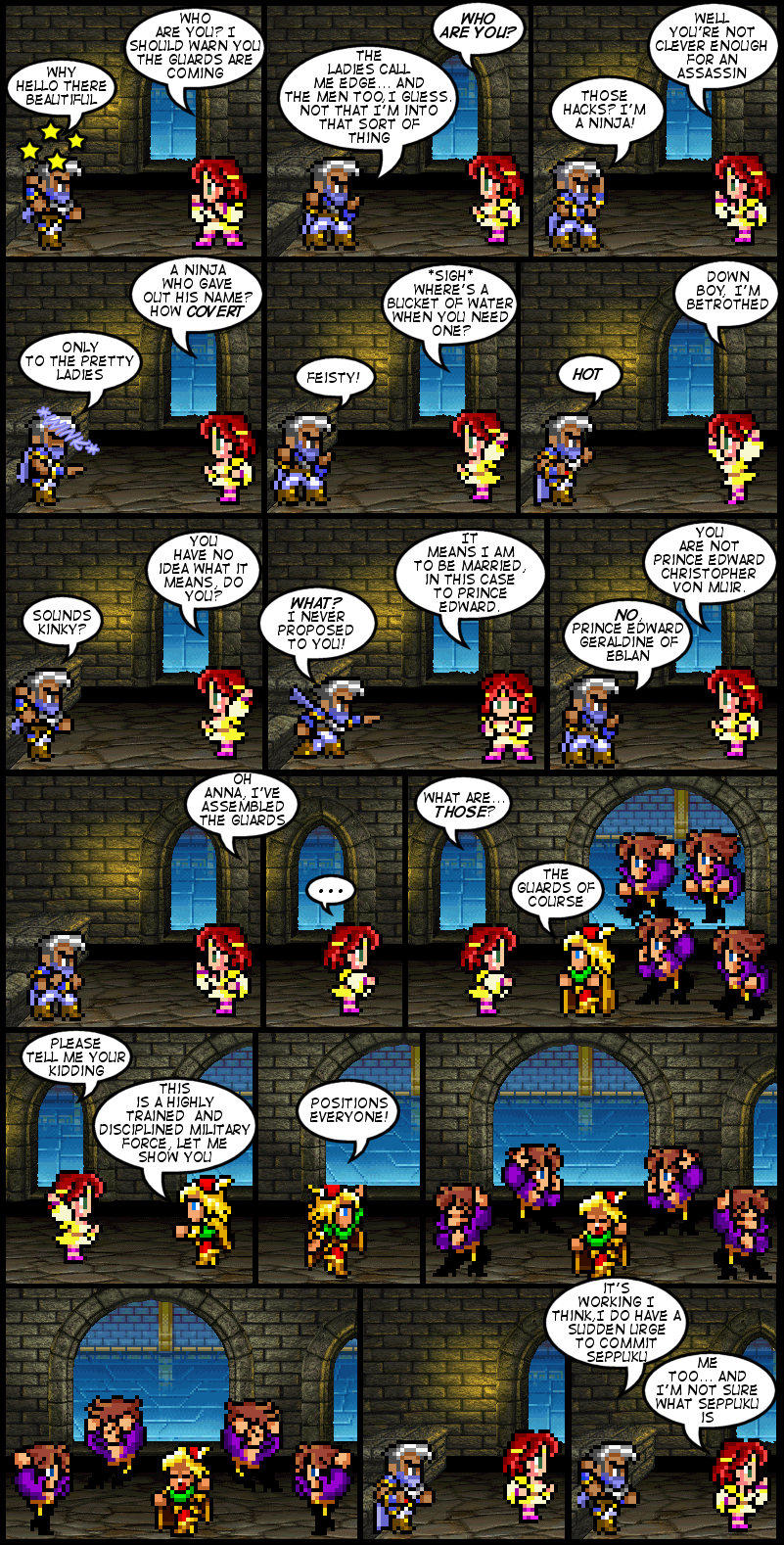 Update ahoy! You can thank this slow update to some forty year old hanging out in their parent's basement who thought it'd be totally awesome to write a virus to mess up people's computers, just because they had nothing better to do of a Saturday night.

Anyways enough about that, being a man of mild intelligence I was able to salvage the most important data, yes that included my comic data obviously, onto a flash drive despite the mind numbingly slow speeds it was running at thanks to said virus. Before the whole thing had to be wiped, sadly this virus hunts down anti-virus programs first, nasty bugger it is.

Whelp we have an update! Now this page is a little silly, but a thought occured to me well… about a year ago that a Bard prince would totally have dancers for soldiers. Plus it was a silly idea and I found it amusing, so there you go. Oh and yes they are in the official colours of the Damycan soldiers as defined by the sprites I have sitting in one of my folders, so… yay for being accurate in some respects? Also it has Edge's AND Edward's full names! Mind you I ad libbed Edward's middle name from Chris to Christopher, I think it sounds fancier and I've messed with a lot already so *shrugs* What's a middle name in the grand scheme of things? One last thought, EDward GEraldine anyone else pick this up?

As for Seppuku for those of you not up to date on your ritualistic suicides, it's a form of Japanese ritual suicide involving disembowelment in order to restore honor. Now it wasn't really a Ninja thing so much as Samurais and Nobles, but it's not totally inconceivable a Ninja might be aware of it, despite the absence of a Japan in this world.

Also we're just one page away for the land mark of fifty comics… finally. Took us long enough to get here, anyways next update reasonably soon, barring no more people decide to get bored of a Saturday night and write something malicious.

Nope, just before the milestone my computer goes into remission. Anyways, it's working now and I have my script so I can do it now! Stupid viruses... I loath them...

And just before the milestone... the comic is on temporary hiatus...