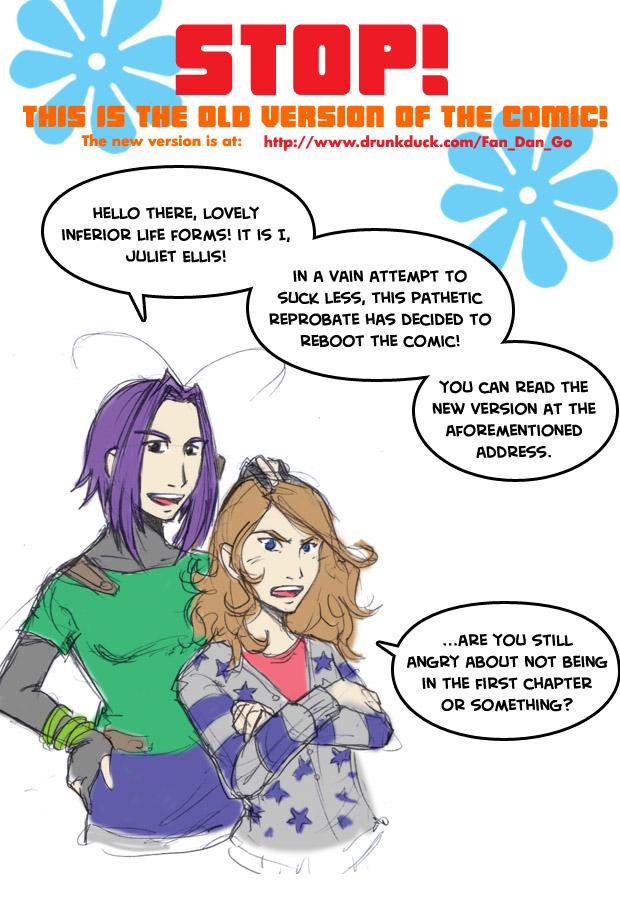 Yes. I have rebooted. Please check out the new version:
http://www.drunkduck.com/Fan_Dan_Go

I was torn for a long while, but I hadn't updated the original for six months, and I was really just thinking ‘man, I wish I could start this over’. When I began FanDanGo, I didn't know much about comics. I used this comic as a place for experimentation, and I don't regret that because I learned a lot, especially thanks to all your comments!
But it struck me that because I was using it as a sandbox, and when I started I knew nothing, I wasn't doing the comic justice. The experimentation was important, but ultimately Fan Dan Go was too good an idea to waste on just messing about. So I've brought it back. I want to be serious about the comic this time. Make it a really good comic. Naturally, it'll still be as zany and as colourful, and everybody will still be there (yeah, it's true, Juu isn't in the first chapter, but she'll turn up soon enough hahaha!) so I hope you'll all give the reboot a try!

I'm leaving this old version here for posterity, because I like to have my development as an artist visible rather than pretending my old work never happened.

As far as I can see, it is not a reboot, it is a new story. So you think you can end this with a cliff hanger? Keeping all open questions of a complex story unanswered? For this you get no rating from me :P

I am going to check it out asap.