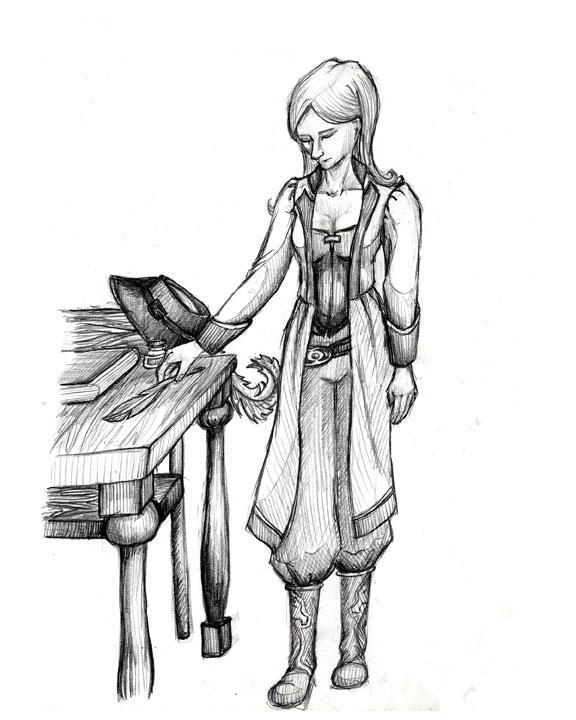 Welcome to Fated Feather, a comic that started back in 2004 in an attempt to teach myself to draw. I was an art student learning weaving and metal-smithing at the time, and the few drawing classes I took were more concerned with abstract art than objects that were real, so this was my outlet. Furthermore I was in several fascinating art history classes, and I was in love with the material being taught there. Having looked through webcomics on the internet at the time, I noticed they all seemed very focused on geek-gamers, gay relationships, furries, or pixel comics. There were very few comics that were drawn out of the rugged anime style I loved from comics like “Blade of the Immortal,”, and even fewer with intricate intellectual, historical-based stories. (I'm not saying there were none- just few) So, sitting in art history class one day, I came up with the idea of making a comic that A.) educated readers about random art history, B.) contained no overtly sexual themes, C.) touched on Christian mythology (as I had seen a favor in comics going the other direction), D.) tried to stay away from obvious Japanese cartoon styles, F.) and told a story that could be used as a narrative at the Renaissance Festival where I worked in the summers.
Having gone through revision after revision, which all comics must, I saw that not all of these needs could be met with the same weight. I ended up making the characters themselves the most important aspect of the story, which let most of the other concepts go by the way-side. The story started small and it snowballed- making it so confusing and complex, that I had to call in my good friend, known as ThisBeRichard, to make sense of it all. He has tamed and sorted the story, giving it a much better chance of ever finishing in a logical manner. Starting in 2009, he began helping be write the script, and does editing with great finesse. I am very grateful for his help.

Understand that this comic is not meant to win any awards, or ever see the face of publishing. It's just an outlet for the meditation of drawing and telling a story that has been pent up inside for too long. With all that in mind… Enjoy!

NOBODY COMMENTED HERE! LET ME FIX IT! Those are some awesome boots. And that's an awesome coat. I helped.