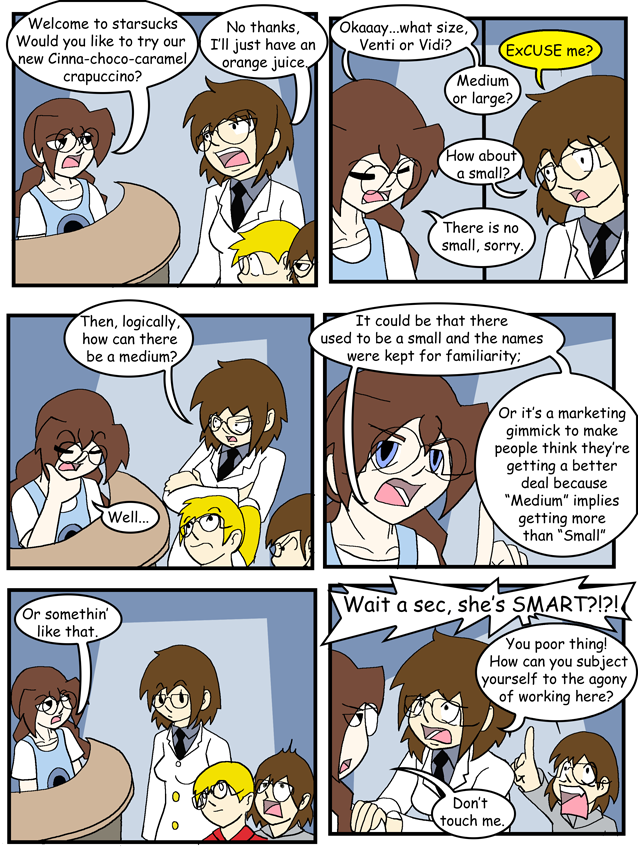 Well, here's Nosh's strip. This is actually a re-write of a strip from another comic I found that mirrors here called Ardra. The link takes you to the original. Ardra is a story about a scientist and her two “experiments” (As she calls her offspring, rather than children) and their lives. They all supposedly have an IQ above 200 and can be condescending towards people with a lower intelligence. As for me, I understand the “smart person in low-line job” quite well; I've been there, I sympathize with you guys, it's like some people assume the uniform removes 30 IQ points.

I can't help myself sometimes but to imagine what my characters (Or I) would do an a given situation, and so this little gag was born. The idea of the gag, as you might hopefully get, is that Ardra and her experiments are not blown away by what Nosh actually said, but more they were blown away by the fact that she actually had an intelligent response. I dunno if it's funny (It's funnier if you read the original), but I liked it.

"dont touch me" lol, hate it when people touch me..

Actually, Hogan, Archiver of Webcomic Cameos and Crossovers, doesn't this count as a Cameo then? Despite being a parody of an existing separate comic?

I love it! Ardra and the girls are more impatient than condescending, usually. Actually, I've worked in retail for many years...corporate types "likes 'em stupid"...both employees AND customers.

I see you! I'm telling Jason. This is funny :D

cameos? whatever. and yes, large corporations do seem to favor the 'never think' process of labor.