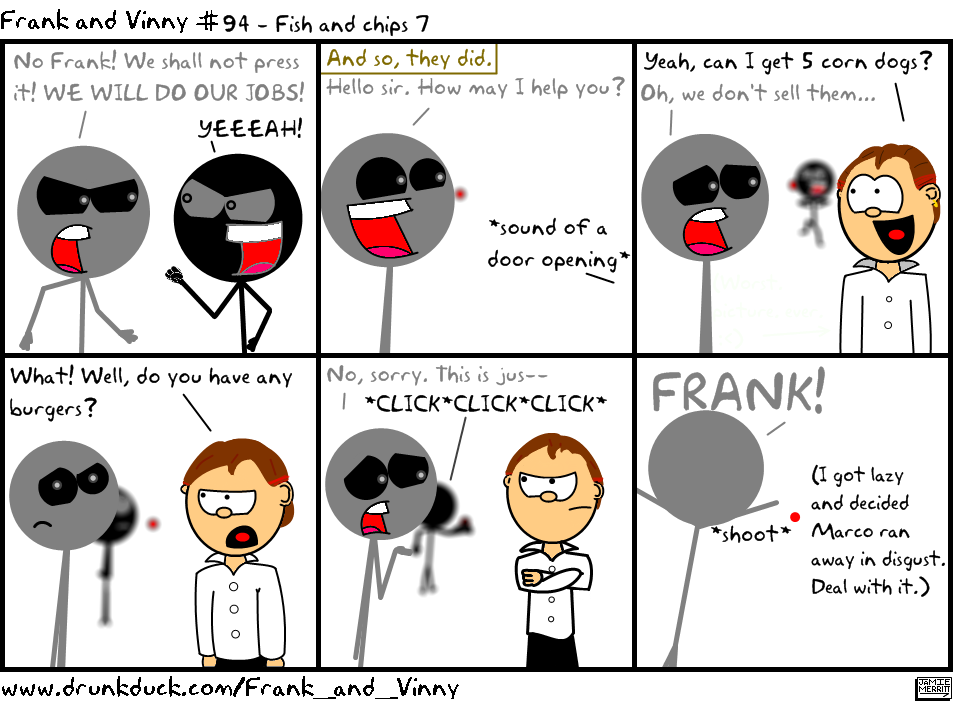 ha, cute cameo! interesting new technique with the blurred frank in the background.

Poorly drawn? I think NOT! Bite thy tongue! :op I LOVE THIS! You 'Frank and Vinny-ified' Marco! Silly Marco... Thinking they have corn dogs at at F&C place! Whatta goof! :o) Goin' up on my fanart page post haste! Thanks again Mr. Crocty! (I got two cameos in one day--plus the day off due to snow and ice...life just doesn't get any better!!!)

nice cameo, I could tell who it was but you still kept your style.

Heh, I would push the red button too.

@TJ, actually, I did put it in, but I put it in a different file-like thingy. D:

You forgot title and number again... Love how you tied in to AC's current storyline with your own.

*lol* Nice cameo Crocty! XD (a really nice touch.) =D I love how Frank is dancing around in the background--you see him standing there, and you just KNOW he's gonna do something bad! *i.e. push de button* :}

I agree with Midge.. Marco was very recognizable. Akk! He pressed the button!!!

Oh crap, yeah. I covered him with Marco's head I think. D:

I instantly knew that was Marco especially with the corn dog line. Great job!

...I don't see frank in the third panel. Perhaps you covered him with Vinny's head.